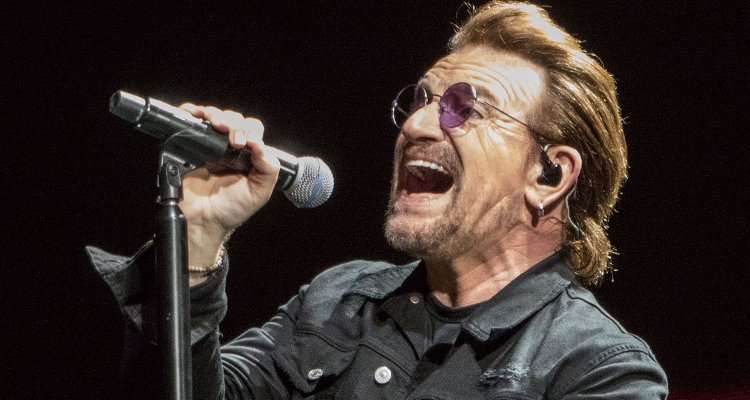 U2 has performed a surprise concert in a Kyiv subway station “as a show of solidarity with the Ukrainian people.”

46-year-old U2 took to social media yesterday to announce the show, and multiple Ukrainian government officials subsequently posted video of the acoustic set. The concert (featuring Bono and The Edge) marks the latest in a series of music-industry efforts to support Ukraine and arrives about one month after the Dublin-based act dropped “Walk On Ukraine.”

U2 also indicated that the gig came together after Ukrainian President Volodymyr Zelenskyy invited them to perform, and phone-captured clips of the low-key concert show a small crowd enjoying the entertainment while cameramen record the happening. (It doesn’t appear that a full-length and high-quality version of the event has become available to fans, though.)

In a minute-long clip uploaded by Olexander Scherba, Ukraine’s former ambassador to Austria, 61-year-old Bono and 60-year-old The Edge can be seen offering a rendition of “With or Without You” (1987). And another clip, uploaded this time by a variety of individuals and outlets, shows U2 and Ukrainian singer Taras Topolia (as well as members of his band Antytila) putting a patriotic spin on “Stand By Me.”

Also during the roughly 45-minute-long set, the U2 members performed “Sunday Bloody Sunday” (which released in 1983 as part of the group’s aptly named third album, War), “Angel of Harlem” (1988), and “One” (1991), to name some. At a different point during the event, Bono, standing beside a translator, addressed the crowd and the 44 million residents of Ukraine.

“Your president leads the world in the cause of freedom right now,” said the Rock and Roll Hall of Fame inductee. “The people of Ukraine are not just fighting for your own freedom, you are fighting for all of us who love freedom.”

Outside the subway station (which has been repurposed into a bomb shelter, per the Ukrainian government), Bono told reporters: “I think it’s one man’s war really, and I think there’s people in Russia – younger people know what’s going on. And I trust in the younger people in Russia to throw this man out of his office that was so high and is so low right now.”

Fan responses to the gig from The Edge and Bono – of course, U2 and Bono in particular have faced criticism over the nature of some past protests and charitable initiatives – appear generally positive. But certain observers are calling for the band to speak out about other deadly conflicts around the world, and different social-media users yet are criticizing the possible motives behind the Ukraine concert.