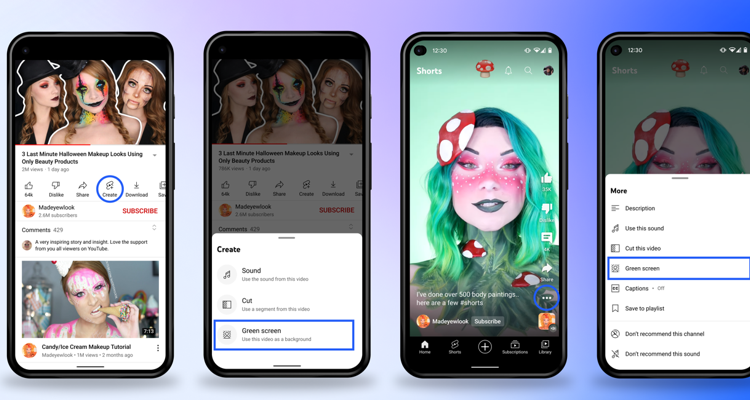 YouTube Shorts is rolling out a new green room filter for creators to use YouTube videos as backdrops.

The feature is remarkably similar to a TikTok feature that allows the same function. The new Green Screen functionality allows any eligible YouTube video or Short to be used as the background for a new YouTube Short video. Users can use both the audio and video or the video background while muting the video’s audio. Creators can also use green screen with any video or photo from the gallery on their device as well.

Any video that is created with the new YouTube Shorts Green Screen feature will be attributed back to the original creator’s source video.

Users who don’t want their long-form video content to be remixable by YouTube Shorts users can opt out within YouTube Studio. It’s also worth noting that any music videos or VODs with visual claims are ineligible for the green screen feature.

iOS users will get access to YouTube Shorts Green Screen remixes first. The rollout is happening over the coming weeks, so if you don’t see the filter available yet it is coming. Eventually, the update will roll out to Android users as well. This new green screen remix filter builds on top of the ‘Cut’ feature YouTube Shorts introduced last month.

Users can use cuts from any eligible YouTube video to create a one to five-second segment for remixing. Any time a new Short is created from your own channels’ content, it will be attributed back to the channel with a link in the Shorts player. That feature is live now on iOS, but it has yet to roll out to Android users.