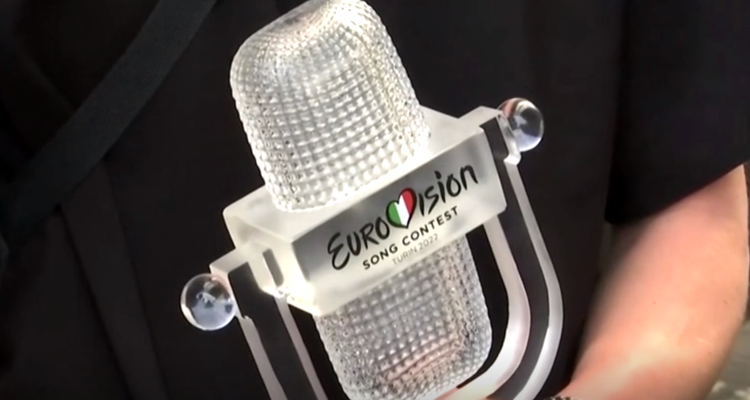 The Eurovision 2022 winners Kalush Orchestra have auctioned off their trophy to support the Ukrainian military against the Russian invasion.

Ukraine’s Kalush Orchestra won the Eurovision Song Contest this year with their entry, “Stefania.” The group announced they would auction off the trophy online for cryptocurrency via Facebook. The trophy sold for over $900,000 or 500 Ethereum. The Kalush Orchestra has donated the funds to the Ukraine military to purchase drones in support of its defense against Russian invasion.

The Tallinn, a company based in Estonia, made the winning bid of 500 for the Eurovision 2022 winners trophy.

The pink bucket hat worn by Kalush frontman Oleh Psiuk was also auctioned off. It fetched a whopping $370,000 from a private buyer in the Czech Republic. Ukrainian TV presenter Serhiy Prytula helped auction off the trophy via Facebook Live. Once the group learned how much they had raised through auction, the Kalush Orchestra shared a message on Facebook.

“You guys are amazing!” the translated message reads. “We appreciate each and every one of you who donated to this auction and a special thanks to the team Whitebit who purchased the trophy for $900,000 and are now the rightful owners of it.”

The Eurovision Song Contest has been taking place annually since 1956. But this marks the first year a recipient’s trophy has been auctioned off to someone else. The Russian invasion of Ukraine started on February 24 and has escalated an eight-year conflict in the country’s eastern regions. More than 10 million Ukrainians were forced to flee their homes due to Russia’s unprovoked invasion.

During the Eurovision Song Contest, the Kalush Orchestra highlighted the conflict. “It should be on the front pages always, until peace comes,” Psiuk told the audience of millions. The group urged Europeans not to grow immune to the ongoing fighting and continue their support of Ukraine.