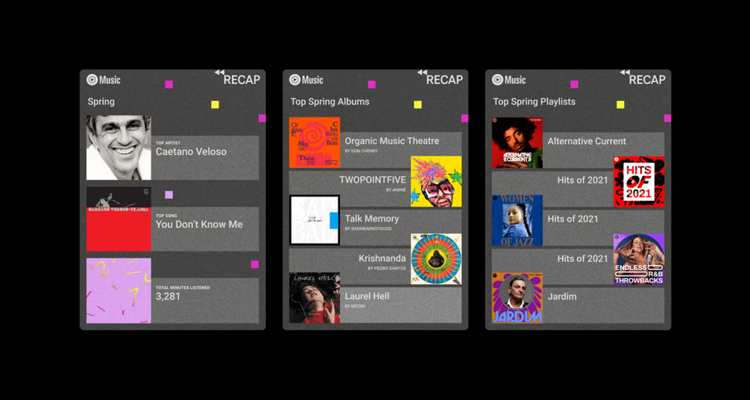 YouTube Music introduces Spring Recap, the first in a series of seasonal recaps to compete with Spotify Wrapped.

After testing the waters with the 2021 Recap in December, YouTube Music announced the launch of Spring Recap, “an exploration of your top artists, songs, albums and playlists over the last season.”

Each season, YouTube Music will provide listeners with a personalized recap of their music trends and an annual recap to compete with Spotify’s popular year-end Wrapped. The company promises additional stats and features later this year to further showcase personal listening tastes.

Every year, fans eagerly await the release of their Spotify Wrapped. For some listeners, it’s the main reason Spotify continues to reign as their music service of choice. YouTube Music’s 2021 Recap was the company’s first foray into a competing experience. Offering a seasonal version showcases Google’s efforts to propel its music service to the top, but it’s not the only one.

However, the biggest hurdle to overcome in launching such a feature is having listeners use the service enough to generate data to recap in the first place. Users quickly find that if they haven’t already been using a service regularly, they will lack the data necessary to generate a recap.

Those who spread their listening habits across multiple services aren’t necessarily impressed with copycat features. “Tidal gives me a recap every month,” says one user. “Not that I need it, as I use last.fm to track my listening.”

“Spotify wrapped day is insane with how many people share their stuff all in one go,” explains another. “Having it multiple times a year seems like it reduces the impact.”

Regardless, companies will continue to saturate the market with features their competitors showcased first, and they will continue to see success in doing so. YouTube Shorts, Google’s answer to TikTok’s short-form video format, recently reported topping over 1.5 billion users. The platform’s creators find that focusing on a mixture of short-form and long-form videos leads to more overall engagement.