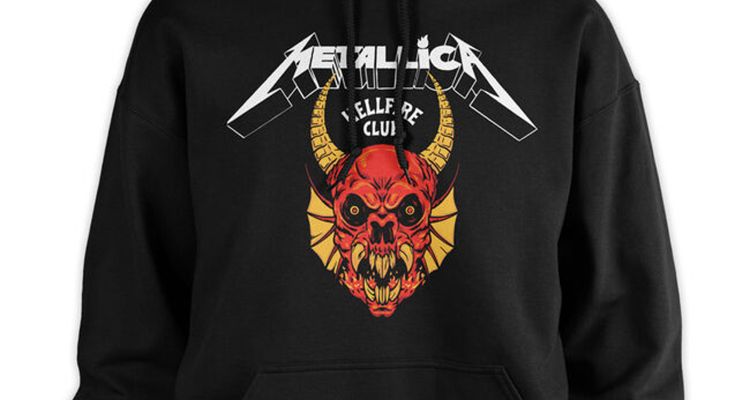 Metallica has teamed up with Netflix to offer a series of ‘Stranger Things’-inspired merch.

Both Metallica and Kate Bush have enjoyed newfound popularity and a legion of Gen Z fans who are discovering their music for the first time. Metallica is enjoying a resurgence thanks to the 1986 track, “Master of Puppets,” appearing in season four of the Netflix series Stranger Things.

Eddie Munson plays the track on guitar to distract a horde of bats while in the Upside Down. Munson is the leader of the Hellfire Club, a dungeons and dragons group created by friends. Each member in the group has their own shirt, which inspired Metallica to create their own version of the Hellfire Club featuring the Metallica logo.

“Eddie, this one’s for you,” the band wrote when announcing the new merch line. “We’re having the most metal meeting ever of The Hellfire Club so we’re scouting out ‘lost sheep’ and outsiders to join. Do you think you have what it takes? Then suit up.”

The official Metallica x Stranger Things merch collection is now available on the band’s website and the Netflix shop.

The merch collection consists of a t-shirt, a baseball t-shirt, or a hoodie. Each piece features the Hellfire Club with the Metallica logo. Metallica is hugely embracing the newfound popularity by inviting Eddie Munson’s actor Joseph Quinn to jam with them backstage at Lollapalooza 2022. Metallica headlined day one of the Chicago festival and ended the set with “Master of Puppets,” paying homage to Stranger Things with footage of Eddie on screen while they performed.