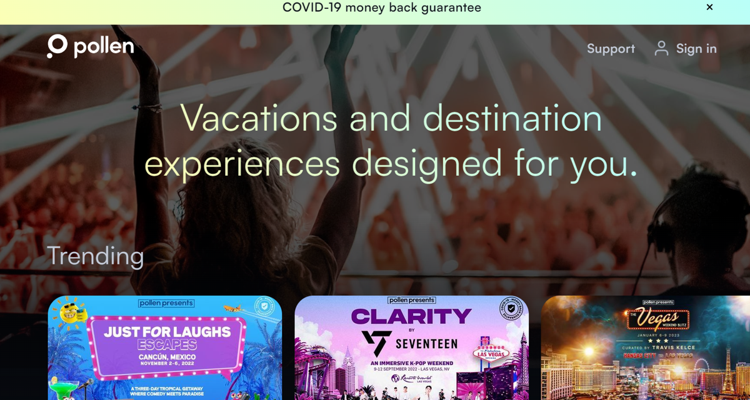 Destination events startup Pollen will restructure, which entails job losses for its workers as the company splits up.

But workers say they have known the startup’s position was untenable for many months. Digital Music News has spoken to several employees of the company who have shared they have been waiting for pay for nearly two months, with no word from C-Suite employees. “As of today, I am owed my salary for the pay period ending July 15 and the pay period ending July 31st,” one employee wrote on LinkedIn on August 6.

Additionally, employees were notified on July 29 that insurance was not funded since mid-June. That left many Pollen employees without insurance coverage since June 30, with no notification. Employees were eventually sent COBRA enrollment but employees say Pollen is “being dodgy regarding their initial statement of covering any and all incurred COBRA costs.”

COBRA is a continuation of health insurance coverage under US law for employees who have lost coverage through voluntary or involuntary job loss. Another pay period is approaching (August 15), and employees only got a detailed explanation from CEO Callum Negus-Fancey late last night in the form of a long, winding email.

CEO Callum Negus-Fancey sent the email to around 500-600 employees saying Pollen has been ‘limited’ in what it can share. Negus-Fancey confirmed the firm will undergo a restructuring after failing to find a buyer. “I’m writing to tell you that our parent company (StreetTeam Software Limited) is appointing administrators to restructure after we were not able to sell the company in its entirey,” the email reads.

Employees are learning today whether they will be made redundant as part of the restructuring process. Those who are losing their jobs have been offered a connection to other startups backed by Pollen’s investors. Callum and Liam Negus-Fancey launched the ticketing startup in 2014 to focus on travel experiences for music festivals.

But employees describe the culture and workplace as a hectic one. One person who reached out to Digital Music News about their time at Pollen described it as an “organization run by kids playing ‘company.'”

Here’s the full email sent to employees below.

“I’m writing to tell you that our parent company (StreetTeam Software Limited) is appointing administrators to restructure after we were not able to sell the company in its entirety. Our parent company owns all our technology and brands (such as Pollen, IMS, and our college travel business). We have already received bids for the consumer facing subsidiary companies meaning customer experiences and refunds will not be affected. However as a result of the restructure, the college businesses are going to become independent from the destination travel experience business.”

“For those who we are asking to work for the college or destination travel businesses you will be invited to a call tomorrow to learn more about the opportunity and who’s involved. For those leaving you will all receive an email tomorrow to let you know and give you more information about your specific situation. We’re also working with our shareholders to get everyone leaving connected with their best portfolio companies to help anyone who is interested to find their next role – we’ll be sharing more details of that tomorrow too. You were all hired at Pollen because you are extremely talented and I know that any company will feel lucky to have you.”

“I am sorry that I wasn’t able to close a deal in which we sold the business in its entirety and kept the whole company together. I have been building this company for more than a decade and it’s been the centre of my life. There is nothing I wanted more than to continue building on the collective vision, culture, and community that we have created together. However, I am pleased that big parts of the company will continue on a new journey. Everything we have achieved is because of all of you. Thank you for believing in Pollen and being part of our journey. Building this company with all of you has been the greatest privilege of my life.”

The letter to employees sent by Pollen’s CEO continues below, explaining why he believes the company failed.

Why we are where we are:

The company was hit with multiple unexpected shocks in 2022 which combined, materially impacted our financial position and our performance against our financial plan. Omicron negatively impacted sales for future experiences and meant a lot of partners wanted to delay launching their experiences until it was over, delaying sales.

Both with the industry and with customers there was a ‘COVID fatigue’. This had not been seen at any other point in the pandemic when our sales were extremely strong. At the same time, complex government protocols around reopening strategies, eg vaccine passports and traffic light systems, created unexpected costs with some of the experiences we did operate, and meant we had to cancel some experiences entirely, where major protections didn’t always apply. Both of these factors materially impacted profitability.

The tech stock crash meant we raised less money than we planned. In our Series C given investors changed the size of their commitments or unexpectedly chose not to invest. This was characteristic of the environment where technology companies, particularly those in the consumer space, saw globally renowned VCs withdrawing term sheets and re-calibrating valuations, with a backdrop of the fastest decline in VC investment in over a decade.

The change in the macro environment led to record lows in consumer sentiment across our key US and UK markets. This impacted i) desire to purchase with some customer segments and i) what products some customers wanted. As a result, we had to delay launching many experiences as we adjusted the products / who they were targeted at. In turn, this impacted sales.

Sales cycles also changed for some audiences looking to commit to purchases later which further impacted sales in the period. Another factor, was the unusually large amount of pressure on people’s time due to pre-existing commitments that had been condensed in to the period following Covid restrictions ending, eg multiple weddings, travel vouchers, postponed vacations.

Although we developed a winning strategy to tackle the above, and were seeing sales recover strongly, particularly for experiences later this year or into next year, it was too late. All of this was after 18 months of battling the pandemic.

We could have sustained any of these shocks individually but their combined effect has been too much and resulted in us having far less cash than planned in a very choppy and unpredictable market. As a result we hired Goldman Sachs to help us find a new partner.

Why was the process with Goldman unsuccessful?

In light of the deteriorating VC investor backdrop, we agreed with shareholders to run a process to find a long term strategic partner for the business. The macro environment continued to deteriorate in Q2 with further severe de-rating in the valuation of high-growth loss-making tech businesses. Overall M&A volumes also fell materially from levels only a few months earlier. This effect was exacerbated by a heightened public market focus on all companies to preserve cash and focus on core operations given rising interest rates, high inflation and fears about their ongoing impact on consumer behavior and discretionary spending.

As result, given we are a loss-making business, innovating in a nascent category, we were not considered a big enough priority to buy in this climate, even by companies who had tried to buy us for significantly more money previously.

Why we ran the process the way we did: We have been searching for a way to secure long-term funding for the company in a way which had the best outcome for customers, employees, and our shareholders. All our decisions and comms were guided by our duties, morality and the legal and expert advice we have been receiving. As part of this process, we have been legally unable to share detailed updates with you due duties of confidentiality and various agreements we had with potential buyers. We did not want to risk sharing anything that could jeopardise the process.

Selling the company in its entirety would have been the best outcome for everyone, including all employees i.e. it would have saved the most jobs and resulted in better packages for those not staying with the company. We were in very late stage discussions with more than one buyer and so we felt it right to see these conversations through for as long as it was viable that they would close in a sensible timeframe. We recognize how difficult this was and how much pressure it put on the business and all of you. Please know that throughout this process we have been putting all stakeholders interests including yours above our own.

We met with our advisors and board twice a week to determine if it was correct to continue running the process the way we did, in order to hold ourselves to account and make sure we were making decisions in line with the above criteria. Based on feedback from buyers it became clear to us it would take too long to close this type of deal in the context of the financial pressure the company was under. At this point, we immediately executed on the contingency plan I outlined at the top of this email that we had developed in the background in case the process was not successful.