Cardi B Beats Multi-Million Dollar Lawsuit Over Photoshopped Back Tattoo 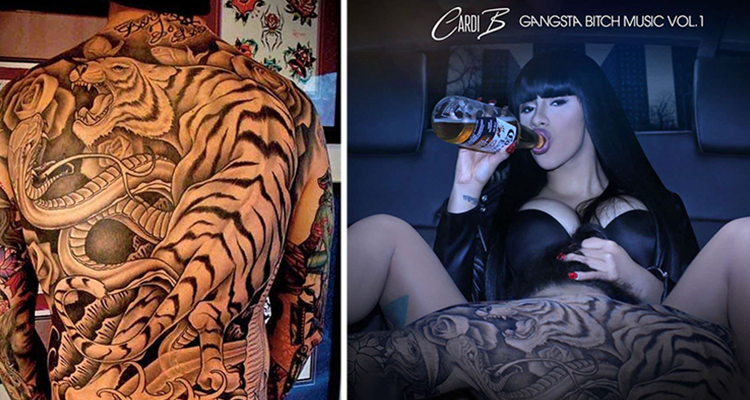 Cardi B was cleared of allegations of misappropriating a man’s likeness for using his back tattoo on the cover of a 2016 mixtape.

The rapper was cleared of any wrongdoing on October 21 after a panel of four men and four women ruled her company Washpoppin Inc. isn’t liable to the plaintiff–Kevin Michael Brophy. Brophy alleged he suffered shame and embarrassment from seeing part of his back tattoo superimposed on a male model for the cover of Gangsta Bitch Music Vol. 1.

That album cover features Cardi B in the back seat of a car with a beer bottle, the male model posed between her open legs. Following the ruling, Cardi B spoke to a crowd outside the courtroom. “I’m just grateful. I’m beyond grateful, I even shed a tear. I really don’t be crying at all and for some people it was probably a little lawsuit but to me, it means a lot to me,” she told the crowd.

“It means a lot to my legal team and I want to wish everybody the best of luck. Everybody were really great lawyers, from my lawyers to the plaintiff’s team, it was a very interesting case,” Cardi B said.

The Cardi B back tattoo lawsuit was first filed by Brophy in 2017 after the rapper didn’t answer a cease-and-desist letter.

The lawsuit named Washpoppin Inc. and Cardi B’s former manager Raphael and his record label KSR Group, seeking compensatory, punitive, and non-economic damages for the misappropriation of his likeness in violation of California Civil Code Section 3344 and false light invasion of privacy.

Brophy’s lawyers also sought disgorgement of profits from the mixtape, which jurors heard brought in more than $1 million in profits. However, Cardi B testified that she only made $225,000 from the mixtape after taxes. Cardi B also testified that she never specifically chose the design for the tattoo, only that she wanted the model’s back edited for the album cover because he had too many pimples.