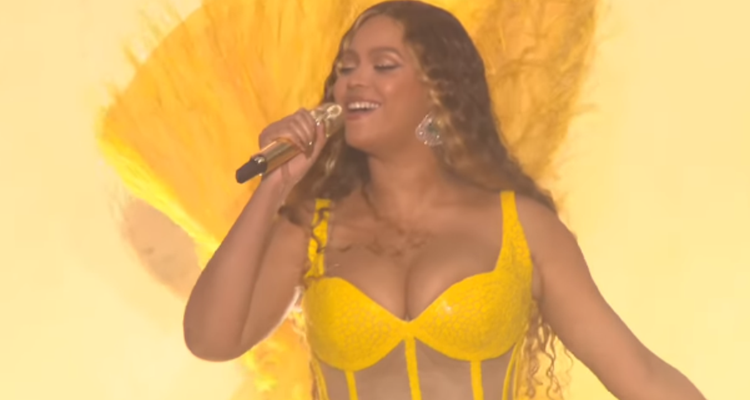 Beyonce has returned to the stage as a headliner for the first time in four years to celebrate the opening of a Dubai resort.

The singer took the stage at the Atlantis The Royal Resort in Dubai on Saturday, January 21. Violinists hit the stage first, followed by dancers and musicians, before Beyonce rose on a platform wearing a yellow dress and a feathered backpiece. Beyonce opened the show by singing “At Last,” into a microphone. Then she announced that her mom, father, husband, and children were in the audience to support her.

Beyonce’s 11-year-old daughter Blue Ivy later took the stage to dance with her mom. After her performance, she struck a pose and blew kisses to the crowd before leaving the stage. Beyonce’s show went through three wardrobe changes, featuring a red corseted jumpsuit and then a sheer mini-dress to close out the show. Each outfit change brought a new vibe to the show, but Beyonce did not perform any songs from her 2022 Renaissance album.

Attendees to the event had to adhere to a strict no-phones policy. No one was allowed to take photos or video of the concert. Swedish House Mafia performed at the afterparty. Variety reports that Beyonce performed with the all-female Firdaus Orchestra, which features women from 24 different nationalities.

Her opening performance was part of the Atlantis Resort’s Grand Reveal weekend to celebrate the new resort in Dubai that is set to open next month. The hour-long performance included songs like “Crazy In Love,” “Beautiful Liar,” “Flaws & All,” “Spirit,” “Bigger,” “Brown Skin Girl,” and “The Lion King: The Gift.”

Beyonce’s leads this year’s Grammy nominations with nine, including Album of the Year, Record of the Year, and Song of the Year. Perhaps Queen Bey will be taking the stage on Grammy night to sing her hits from Renaissance? Variety speculates that Grammy show producers are in talks with the singer for a possible live performance.