iTunes is ‘Exclusively Streaming David Bowie’s The Next Day,’ Yet It’s Already On Grooveshark…

Last week Apple announced that it would be exclusively streaming the new David Bowie album, The Next Day, on iTunes through March 12.  It turns out it’s not as exclusive as they, perhaps, expected. 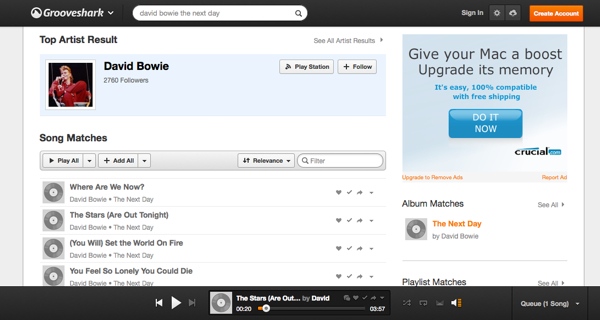 The company, and indeed Bowie, may be surprised to see that the entire album already is available to stream somewhere else — namely on Grooveshark.

This despite the album not being on sale until March 11, which, as Grooveshark relies on user-generated content, begs the question: how did the person uploading it acquire it?

The sound quality is fine, so it would either have to have been ripped off the iTunes site or acquired through some online leak. As the legendary artist managed to keep the recording of the album completely secret, it’s very unlikely anyone involved in it is the source of a leak. 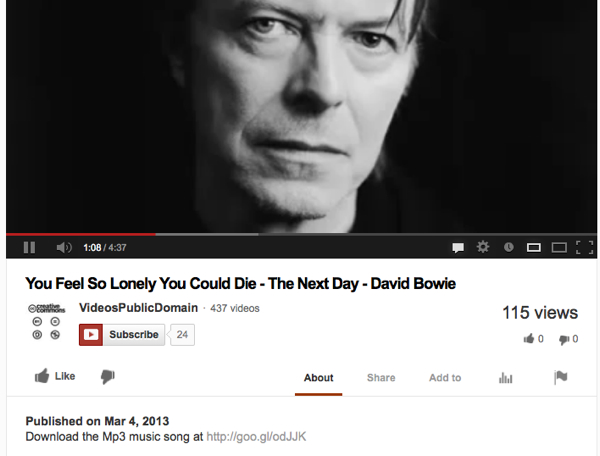 And, if you prefer to own the record instead of streaming it, this uploader has helpfully posted a link to where you can download the ‘Mp3 music song’ “You Feel So Lonely You Could Die” (a track off the soon-to-be-released album) on YouTube.

These streams and download links are not difficult to find on Grooveshark and YouTube – I simply had to type in “David Bowie” and the album title – so how come neither of the sites have taken them down?

This complete lack of monitoring of their inventory doesn’t just affect Apple, Bowie and his label – it also punishes music services that make their utmost to stay on the right side of the law and work with those who provide the music.

Spotify is one such service, and it only features music that it has a license for. To pay the rights holders, they have to feature a lot of intrusive ads in between songs, and charge £10 for subscriptions without adverts. Meanwhile, they have to compete with music services such as Grooveshark and YouTube, that feature plenty of unlicensed music – and, as we can see and hear, unreleased albums – that they don’t pay for, and therefore are under less financial pressure.

YouTube features almost any album you want to listen to in full. Here we’ve found the Beatles’ remastered Sgt Pepper’s Lonely Hearts Club Band album, as well as all other Beatles albums and Pink Floyd’s The Dark Side of the Moon (the fact that it’s only audio, with a still shot of the cover, illustrates how important music has become to YouTube).

None of these albums are on Spotify, which makes you wonder if YouTube has a license to feature them. As none of them have been uploaded by the artist or label, one can only assume the answer is: no. 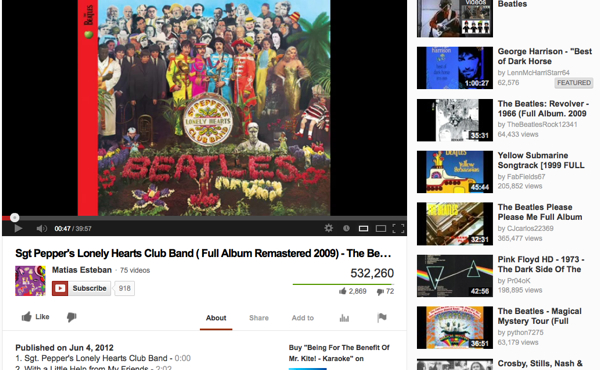 In 2002 Bowie said: “Music itself is going to become like running water or electricity. So it’s like, just take advantage of these last few years because none of this is ever going to happen again. You’d better be prepared for doing a lot of touring because that’s really the only unique situation that’s going to be left.”

Yet, he chose to partner with a major label for his latest album, and to protect its exclusivity. I guess we can look forward to a Bowie tour in the not-so-distant future?