Musicians Can Make Money Renting Their Gear With Sparkplug

It’s a common problem in the touring music community. Touring Band X amp breaks down before their show in Minneapolis. They scramble to seek out rental companies, but none exist. So the band calls the venue to ask for suggestions. The venue calls local musicians in town they think might have the amp the band needs. No luck. Touring Band X has to swing by a Guitar Center, “buy” an amp and then return it the next day with the excuse “er it doesn’t go to 11. We thought it would reach 11.”

Just last week I had a day off in Columbus and wanted to record a new song. I Googled around for recording studios, but all were either booked or didn’t get back to me. I found one from a friend referral on Facebook – under the wire!

Sparkplug looks to fix this ongoing problem – and help make musicians money along the way.

“It’s very similar to the model of AirBnB, but for for creative tools,” one of the founders, Jennifer Newman Sharpe, mentioned to me via Skype from Sparkplug’s Brooklyn office.

Sparkplug was co-founded by Julia Wilde, Charles Ridley, Jennifer Newman Sharpe, and Jonathan Eshak and officially launched in June. Recently, Michael McDonald, founder of Mick Management, has jumped on board as a partner and adviser.

With Sparkplug, owners can list their equipment, instruments, rehearsal or studio space and potential renters can search by city and category to find what they need.

Once a request is sent by a potential renter, the owner has 24 hours to accept the request. The owner gets paid 24 hours after the rental is completed. And if there are no claims, the full deposit is returned to the renter.

Owners can “add on” features and services, like a piano tuner or recording engineer if renting studio space, or delivery service if renting equipment.

There’s an internal messaging feature so the renter and owner can communicate about any details prior to the official request.

It’s a beautiful interface, very intuitive and easy to navigate. I tested it. I setup two accounts and rented a mic stand from myself. All worked well, but the owner was kind of an dick when I showed up. I was going to dock him a star in his review because he smelled, but added it back when he slapped me on the ass as I left his apartment. Go team! 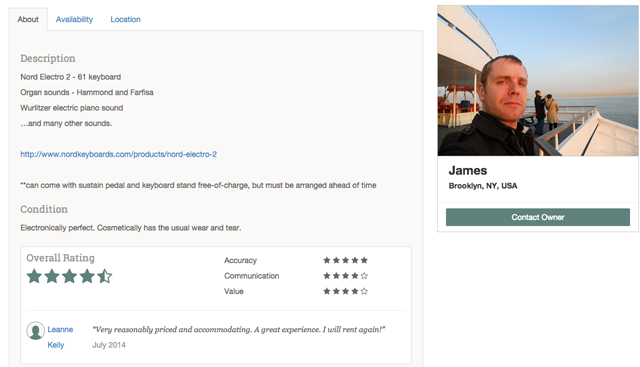 Unfortunately, Sparkplug doesn’t offer any services for hire (other than the add-ons when equipment is rented).  It would be nice to see a way for freelance musicians, front of house engineers, live recording engineers, piano tuners, stage hands, merch sellers, lighting specialists, guitar techs, drum techs, or other specialists to offer their services for hire through Sparkplug. Musicians are constantly in need of these kinds of services while on tour and no other platform offers this in an organized way.

Sparkplug is currently available in the US, UK, Europe, Canada, Australia and New Zealand. Because it’s a NYC based company and they have been promoting it locally since the Beta launch this past March, the majority of the active listings fall within NYC’s borders. Many other major cities lack inventory. For instance, if you need to rent an amp in Minneapolis today, well you’re out of luck.

SO, musicians should get their equipment listed wherever they live and potentially start to earn some moola!

Any creative avenue to help musicians make extra income, I’m all for. And aside from the earning potential, this is a great way to build community amongst touring musicians.

So dust off that saxophone, snap a photo and add a listing for it. You never know when a touring band may need one last minute!