Why an Anti-Gay Rally Is Allowed to Use Your Music 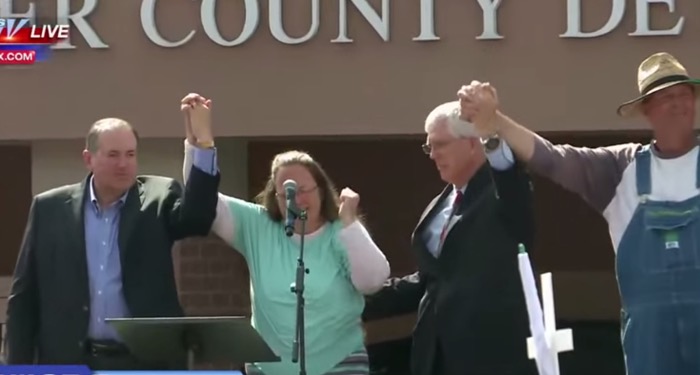 It was another shocking moment for a band with a popular song.  As Kim Davis stepped on stage in front of a cheering Christian extremist audience, Survivor’s ‘Eye of the Tiger’ played in the background, even though the band never offered their permission.  The members of Survivor simply don’t support the anti-gay rhetoric and stance of Kim Davis and her supporters, and more importantly, they didn’t want their song played during the rally.

That led to legal threats from the band’s founder, Jim Peterik.

Simple violation of copyright?  Not at all: just days earlier, the members of R.E.M. railed against Donald Trump for playing “It’s the End of the World As We Know It (And I Feel Fine),” even though the band never would have authorized such use.  But in both the Survivor and R.E.M. situations, there’s little legal recourse the bands can take.

In fact, both Davis and Trump are completely within their legal rights to use whatever music they want, as long as they’re paying the appropriate performance rights organization ASCAP, BMI, SESAC, or GMR.  “In most cases, the event organizers have taken out a PRO license, so they’re in the clear,” explained Steve Gordon, a music industry attorney and author of the book, The Future of the Music Business.  “But even if they haven’t [secured the proper licenses], the artist still needs to demonstrate actual damages, which can be difficult.”

Those damages can theoretically reach $150,000 per infringed work, according to US copyright law.  But according to Gordon, a jury still has to award that, and in most cases, they’d never go that high.

There are other potential legal arguments, including trademarking and invalid associations with the band.  But those are theoretical, and totally untested in actual court.  Which means that in most cases, a band starts looking at legal costs, endless hassle, and time drain, most of these cases fizzle out quickly.

And if they don’t, they could be handing the right defendant a perfect amount of publicity.  “Trump would absolutely love a lawsuit from R.E.M.,” Gordon laughed.  “He’d relish that.”

Written while listening to Daniel Briegert.