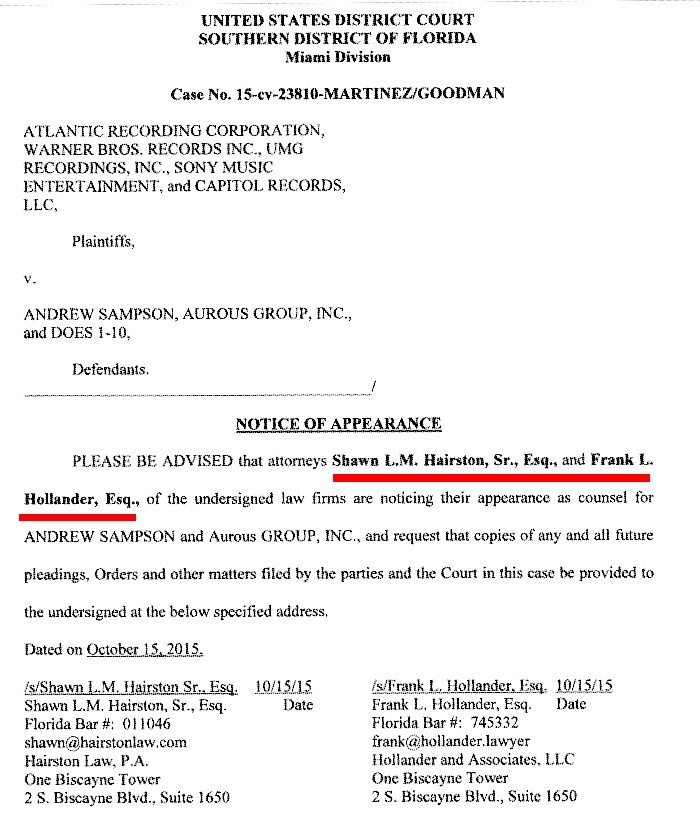 The following is a developing story; please check back for ongoing updates in this quick-shifting situation.  Last update: 9:30 am PT Friday.

The papers, including the leaked excerpt above, are now being entered into the case docket at the US District Court for the Southern District of Florida.   They will confirm that attorneys Shawn L.M. Hairston, Sr., Esq. of Hairston Law, P.A., and  Frank L. Hollander, Esq. of Hollander & Associates, LLC are committing to become lawyers of record for both Sampson and Aurous.  Both are certified and active members of the Florida Bar.


The representation signals that Sampson is indeed serious about his intentions to fight back.  So far, the legal assault against Aurous has been swift and heavy: hundreds of pages of legal documents have been filed, with high-powered lawyers from Washington, DC-based Williams & Connolly, LLP and Miami-based Gray Robinson, PA waging the initial shock-and-awe.

As of Friday morning, aurous.me remains a shell, with downloads for Windows, Mac, and Linux suddenly missing.  Many of those download files are likely to pop up elsewhere, including offshore-hosted accounts, though it’s unclear how directed and focused development efforts on the codebase will be.