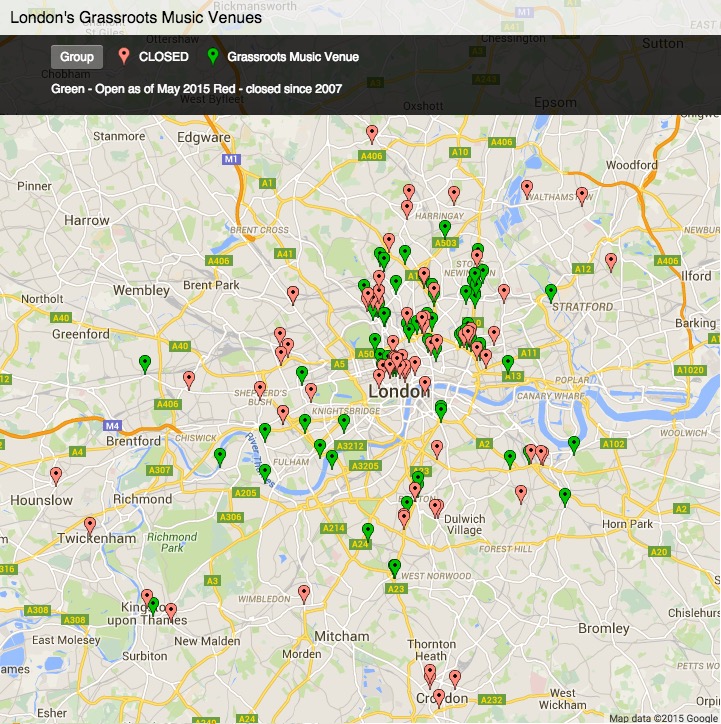 That statistic comes from the Mayor of London’s Music Venue Taskforce, which is trying to figure out why its underground live music scene is disappearing.  “Between 2007 and 2015, London lost 35% of its grassroots music venues, a decline from 136 spaces programming new artists to just 88 remaining today,” the report declared (full pdf here).  “Iconic names like the Marquee Club, the Astoria, the 12 Bar Club and Madame Jojo’s disappeared from the map.”

“Those venues were big players in the music history of London, they fed the UK’s £3.8 billion music industry with a stream of talented acts and they were part of the international story of ‘Brand Britain’.”

“…the demand by festivals and arenas for talented new acts is not being met.”

The reasons for the rapid erosion are undoubtedly complicated, though a huge shift towards music festivals could the biggest culprit.  Overall, the appetite for live music is growing, though the task force warned that depletion of smaller clubs could be choking a critical farm system of talent for festivals.  “Whilst sales of recorded music are in slight decline, demand for live performances is increasing, merchandising is thriving and music tourism is a burgeoning industry,” the report noted. “London’s live gigs and festivals attracted 6.6 million people last year, around half of which were tourists.  However the demand by festivals and arenas for talented new acts is not being met.”

“…every gig brings hundreds of people into an area who also use local pubs, bars, taxis and restaurants.”

Perhaps this is all part of a natural shift in taste and music consumption, though there are potential damaging results for London itself.  “Grassroots music venues are a major factor in regenerating urban areas,” the report warned.  “Their presence benefits town centres, high streets and local communities across London.  The local nighttime economy also benefits from audiences attending shows at music venues.  Going to a gig is an enriching social activity and every gig brings hundreds of people into an area who also use local pubs, bars, taxis and restaurants.”


Perhaps the downturn is the result of a complicated storm of issues, with the task force identifying the following laundry list of problems:

The complete report is here…