If You Read This And Still Buy Expensive Bluetooth Headphones, You’re An Idiot 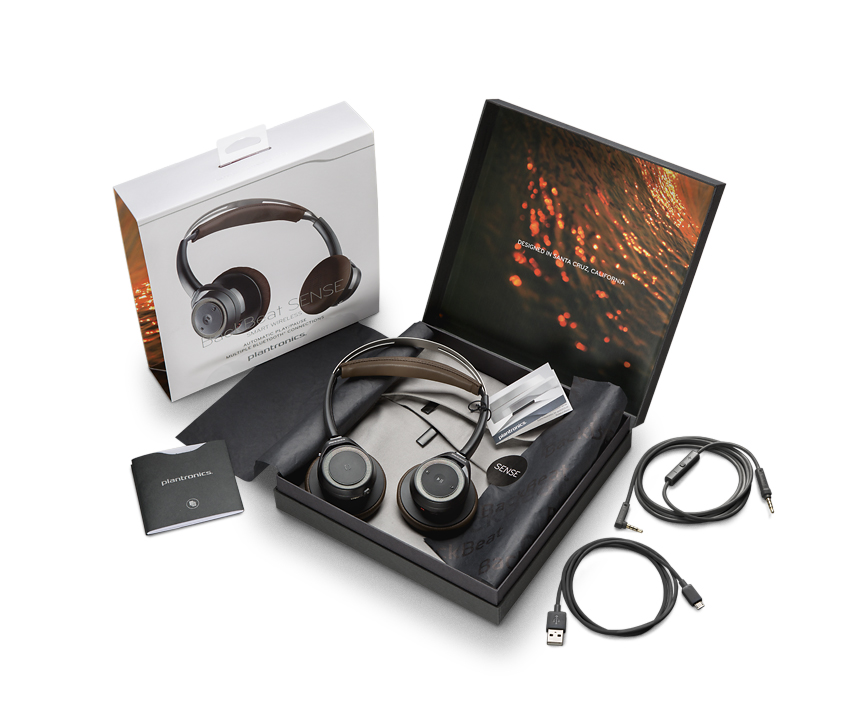 Do you actually care about how good the music you are listening to sounds? Do you like to have the price of stuff you buy at least somewhat of make sense to what the quality of the product is?

If you do care and you are still using Bluetooth audio, then you’re an idiot.

I do not understand why anyone would pay a premium for reduced quality and the minimal convenience of not having a headphone cable, yet many companies seem to be offering them. They are becoming ubiquitous in the same way 3D was among television manufacturers in 2012.

Despite this, I don’t see many people actually wearing them around, even in a pedestrian packed city where headphones are on nearly half the people I see walking around. 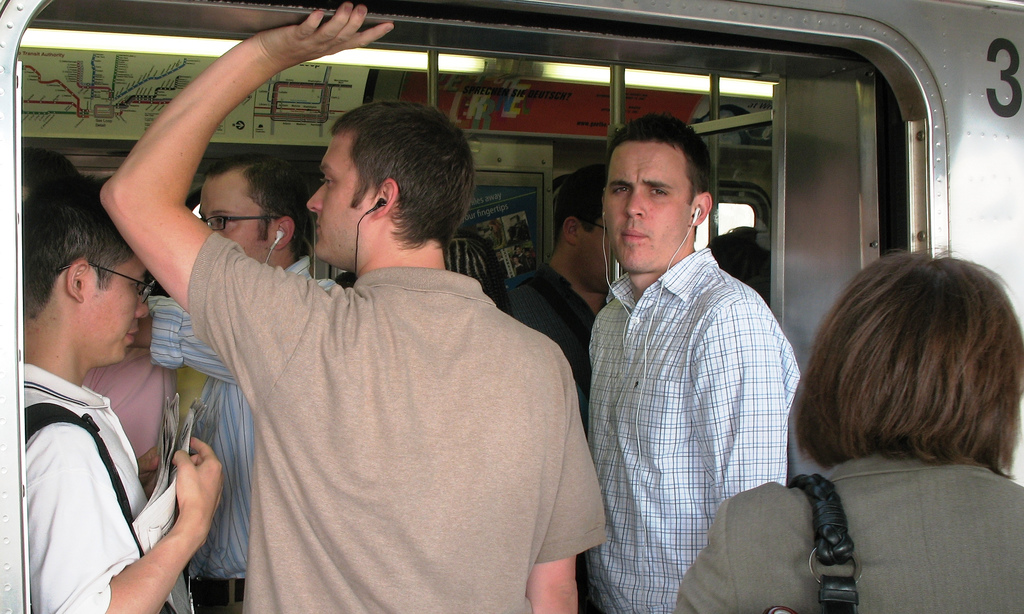 Image by TheeErin, licensed under Creative Commons Attribution 2.0 (CC by 2.0).

I think I know why: the cost increase combined with the quality trade-off is not appealing to most people.  And when it comes to the Bluetooth-enabled Backbeat Senses, a recent entrant by Plantronics, there are just too many issues. 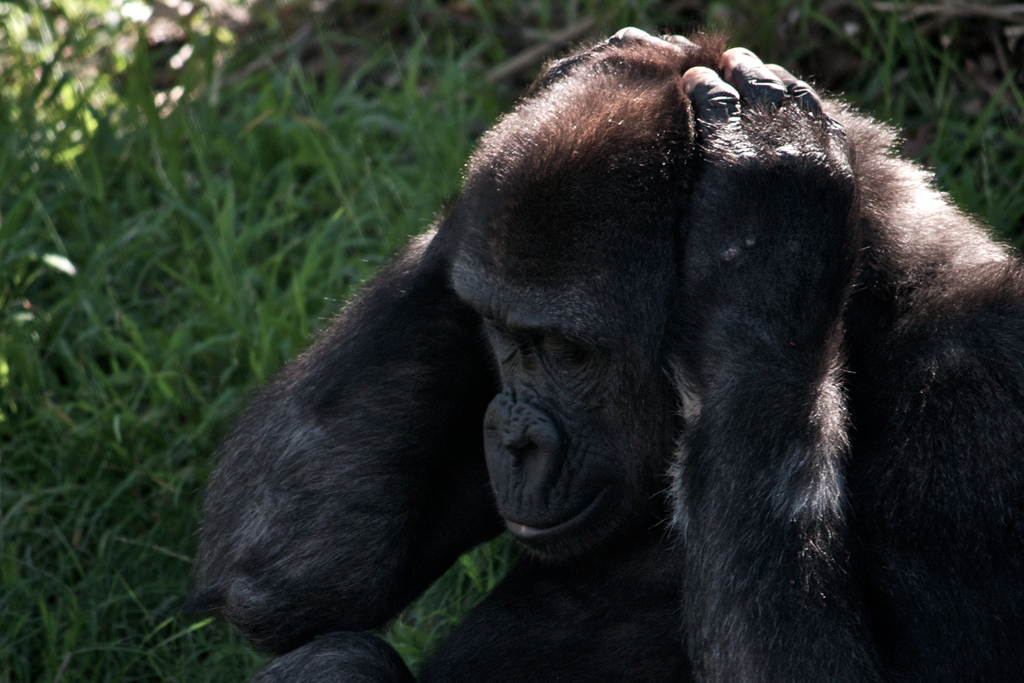 The sound quality on the Backbeat Sense’s is acceptable, when the headphones were wired.  Not great, certainly not terrible. But they’re definitely overpriced at $180!

Maybe it’s just me.  As someone who gives half-a-shit about the fidelity of sound (I get it, most people just ‘skim through’ music), the audio quality from streaming via Bluetooth causes a huge reduction in my enjoyment from listening to music.

I’m impressed by how well the Senses isolate outside noise, with cushiony earpads doing most of the heavy lifting.  The sound quality is also decent for making calls, and I was impressed with the embedded microphone.  The person on the other end of the line had no idea that I was using anything different than what I normally use (a built in mic on my Sony Xperiz Z3 or my Plantronics Voyager earpiece).

That said, the quality of the audio is greatly reduced compared to wired use.  Not only is the sound compressed and tinny, but there were interruptions in the form of gaps of silence.

Wired use produced decent sound.  The Senses are slightly weak in the midrange frequencies and strongest in the highs. The bass level was adequate.  Personally, I don’t like exaggerated bass from headphones, so the blended outcome was satisfactory.

Now, if you switch from 3.5mm stereo cable to the Bluetooth option with the Plantronics Backbeat Senses, you can expect the following:

3. Bass that lacks smoothness and only has punch-y-ness to it

4. Guitars that sound way too treble-y and dull, sort of like a washboard

5. Vocals that get lost in the mix and do not sound organic, at all

6. Interruptions and gaps in your audio

7. The headphones will go silent and need to re-connect 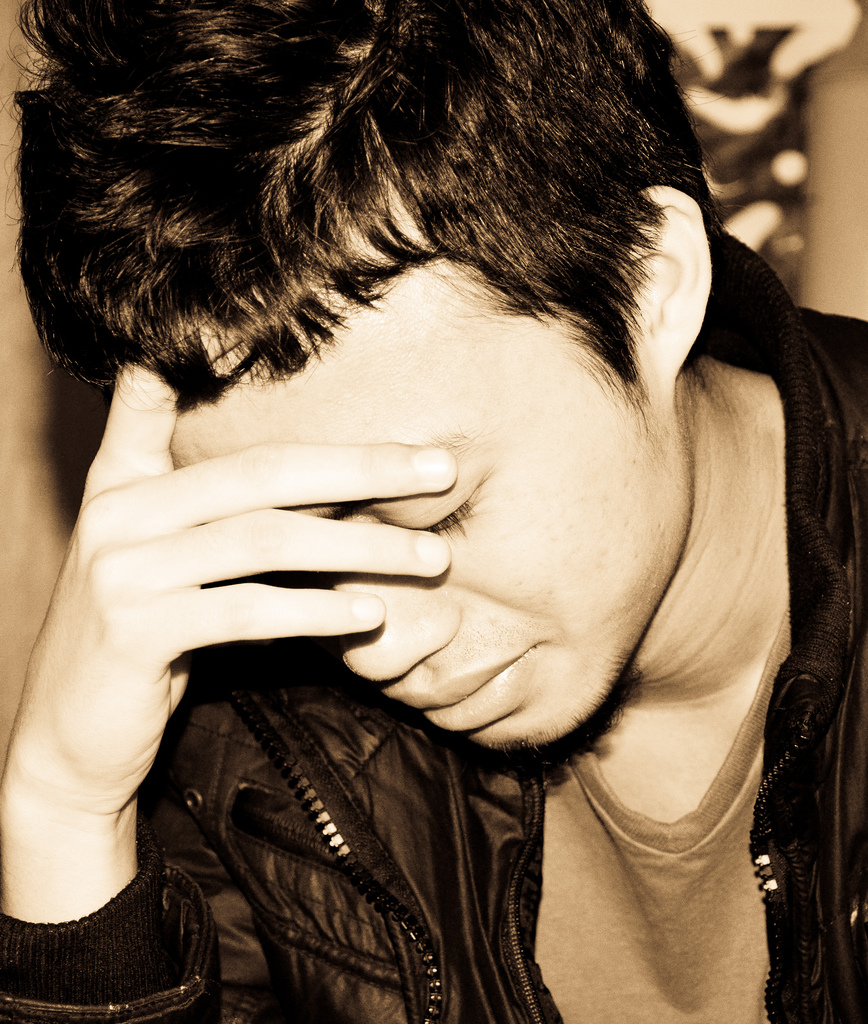 I had a number of issues with the Bluetooth maintaining a connection on the Senses, even on a full charge.  This was more of a tedious issue than a deal-breaker for me.

Perhaps more annoyingly, there were times when I felt the motion sensitivity getting in the way of the experience.  For example, the headphones have a feature that pauses and plays the music when the headphones go from a resting position (around the neck or laying on a table) to actively being used.  There would be times that I had to take the headphones on and off, then wait for the little chime, to indicate that they were active again.

The Backbeat Senses are made to connect to two devices at a single time, but I found that this capability mainly interfered with audio quality.  The experience shifted to degraded audio quality anytime there were more than one devices actively connected, and people on the other end of the line suffered as a result. 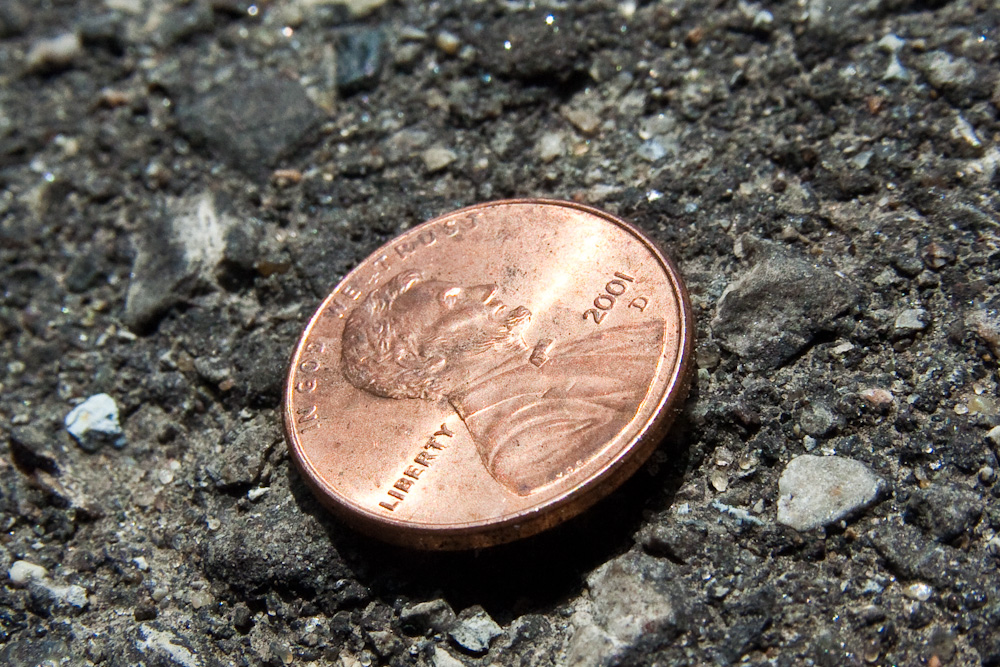 I’m in the minority for even caring about audio fidelity.  But with the Backbeat Senses, there’s a significant reduction in quality that even an untrained ear can detect.  Not only that, there’s generally cost increase for Bluetooth-based audio products, whether it be Bose, Beats, JBL, Marshall, Bower and Wilkins, whatever.

Despite this onslaught of involvement, Bluetooth seems to be the ultimately equalizer of mediocrity.  With Bluetooth-based listening, the quality of the brand ultimately has little effect on the quality of the sound.  There’s only so much EQing that can be done to a compressed signal, and that ultimately affects the ‘high end’ imprimatur.  In other words: “you can wrap a turd in gold, but it’s still a turd.” 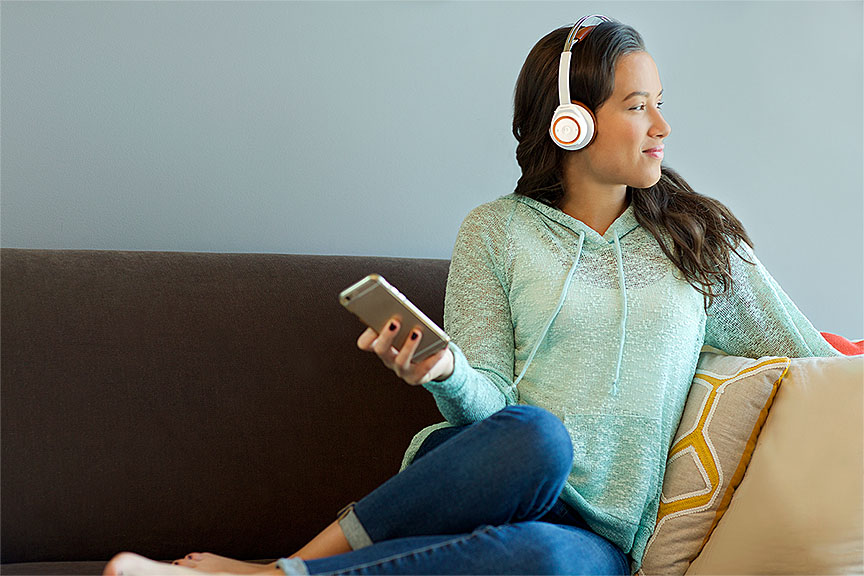 This person sure looks they’re enjoying the headphones. But that’s kinda their job… What’s she looking at anyway while holding her phone like that?

The style of them is fairly plain, which I like.  If you read my last headphone review, you already know I’m not a fan of headphones that are overly plastic, and more focused on cosmetics than decent fidelity. 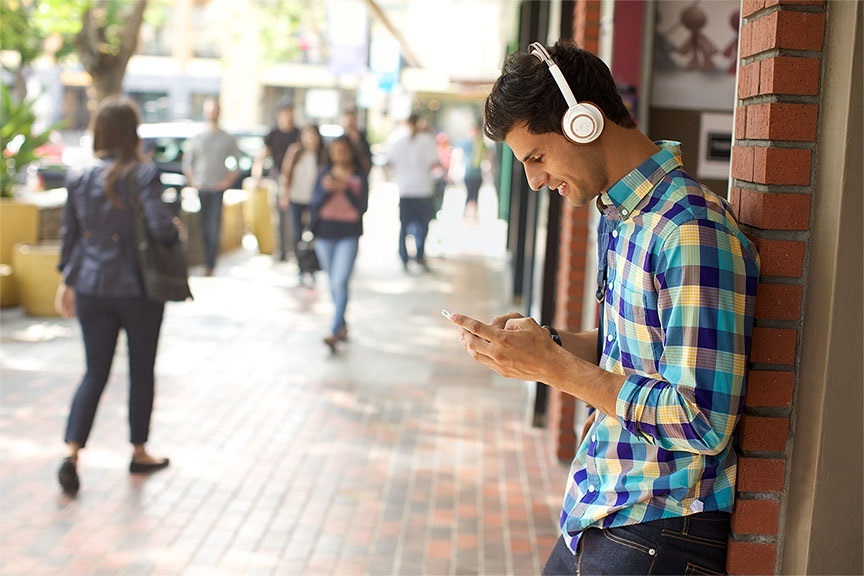 The headphones have a really interesting feature: push a small button on the bottom of the left earpad, and it activates a microphone to amplify the noises of the world around you.  Interesting, but perhaps this is a classic ‘technology in search of a problem’.

This feature is designed to allow the listener to keep the headphones on while still interacting with outside noise.  Let’s say I’m wearing headphones and I notice someone trying to speak to me.  But in this scenario, it’s easy to shift one of the earcups off the ear.  In fact, that takes the exact same amount of effort as pushing the button, which is why I question the point of it.

Additionally, few know that this technology exists, especially on this particular set of headphones.  So, for me to push a button that suddenly lets me hear someone without removing my headphones, sort of makes me look like an asshole. Presumably, you would think I was ignoring you or just trying to read your lips. 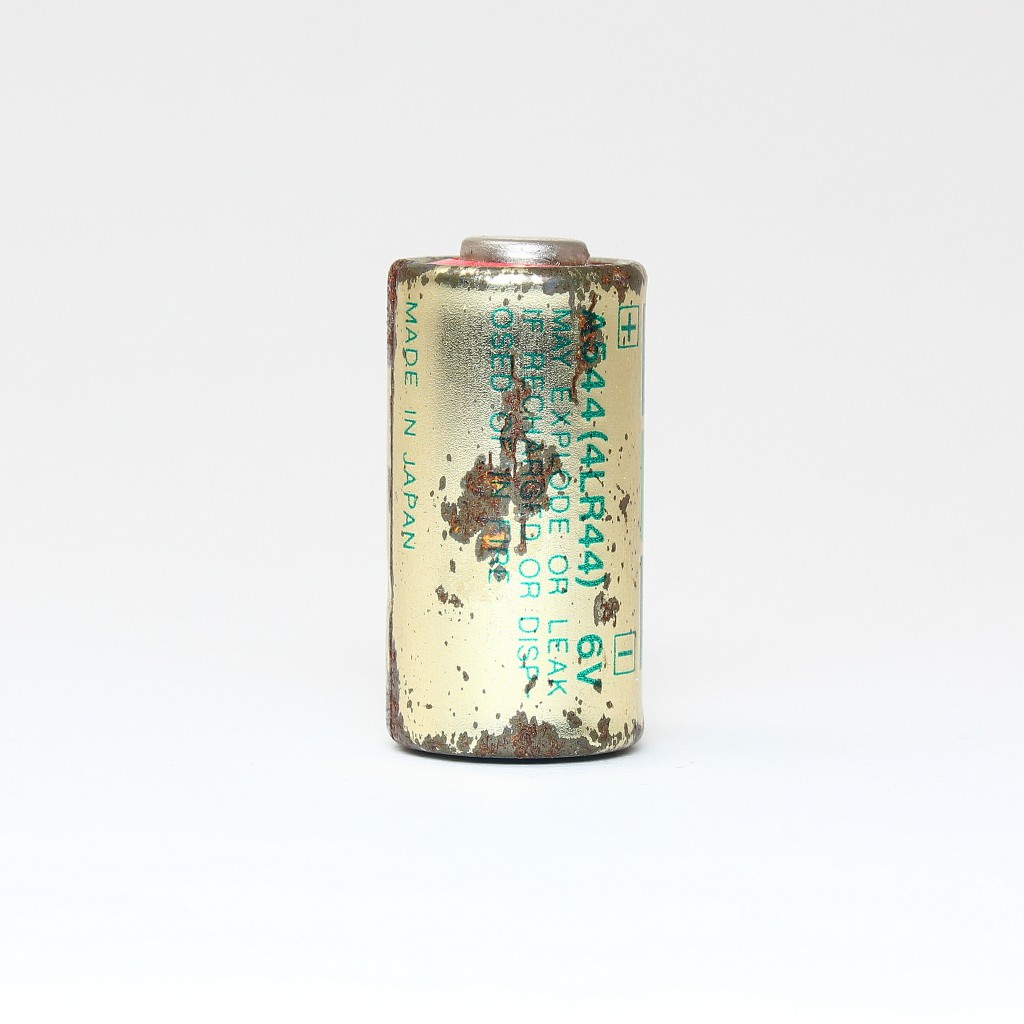 The battery on the Backbeat Senses is horrific!

I use the app PLT Hub on my phone to give me an approximation of how many hours of use I will get before needing to recharge.  The results aren’t spectacular:  PLT will say 12 hours after fully charging, despite Plantronics advertising 18 hours of music streaming on a full charge.  If I actually got 12 hours, I wouldn’t be complaining, but that is not the case.  After about 45 minutes of music streaming, a 10 minute phone call and another 20 minutes of music streaming, my battery went from having 12 hours remaining to only 8 hours remaining.  I’m not a mathematician, but something here isn’t adding up.

Here are the specs, in case you care:

So, would I recommend the Plantronics Backbeat Sense headphones?  I don’t know, they’re not bad, but they’re not worth over 100 bucks either.  If you find a pair in the $30-50 range, I’d say “why not” with about as much enthusiasm as I’d recommend drinking some water if you’re feeling a bit thirsty.

I’m not saying that Bluetooth products should never be purchased.  They make for great phone headsets for calls, a safer option for driving while using the phone.  It’s also handy have one of those little Bluetooth speakers for music, as long as you don’t spend more than $15 bucks on it.

But what do we really gain from using Bluetooth audio, aside from slight convenience?  Is that slight convenience enough for you to cough up a premium price for mediocre quality products?  I can say that I would never have paid $180 for these and I probably wouldn’t even be reviewing them if Plantronics didn’t provide them for the purpose of this review.

Here are the specs, in case you care: