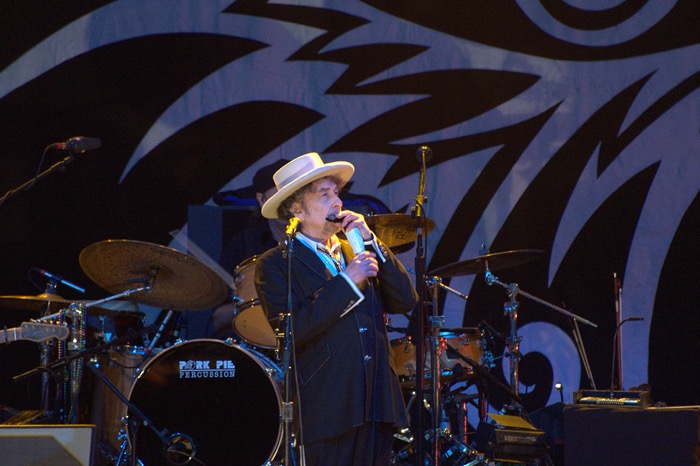 Unlike fellow artists Foo Fighters, Motörhead, Deftones, and Prince, Bob Dylan has defiantly opted to continue his European tour, which is currently winding through Italy.  But he’s not taking chances, and won’t be an open target: according to details now confirmed by at least one venue, Dylan is demanding armed guards both on-stage, at the entrances, and on the floor.

That is expected to be an ongoing demand at all European dates.

“…the demand from Dylan is more than understandable.”

The security request (or rather, demand) was first reported in the Corrriere di Bologna, where Dylan is currently playing.  At the Auditorium Manzoni di via de Monari, roughly a dozen armed guards will flank the facility, some in disguise.  That, according to artistic manager Giorgio Zagnoni, is the first time a security request has been made, but they’re happy to comply given the context.  “It’s the first time that an artist asks us to strengthen security so consistently,” Zagnoni told the Corrierer.  “Given the situation, after the events in Paris, we believe that the demand from Dylan is more than understandable.”

Ideally, the venue would have beefed-up security checks like metal detectors at the entrances, though Zagnoni indicated that there simply wasn’t enough time for those measures.  Instead, attendees may be patted down or questioned prior to entering, which sounds more like a rap show in a major US city than a Dylan show in Bologna, Italy.

Several notables will be in the audience at the Manzoni, according to the Corriere, including the mayor and prefect of Bologna.  That’s additional reason for the security measures, with Dylan undoubtedly a big, juicy American target for radical Islamic nut-jobs.

Helping matters will be a ban on cellphones, cameras, and other peripherals, though apparently Dylan had those restrictions in place beforehand (similar to other artists).

The development speaks volumes on how times have a’ changed since Dylan’s musical birth in the 60s and 70s.  But Dylan’s defiance isn’t a personal compromise, at least not anymore: “I’m not a pacifist.  I don’t think I’ve ever been one,” Dylan told the Los Angeles Times back in 2001.

“I believe strongly in everyone’s right to defend themselves by every means necessary.”