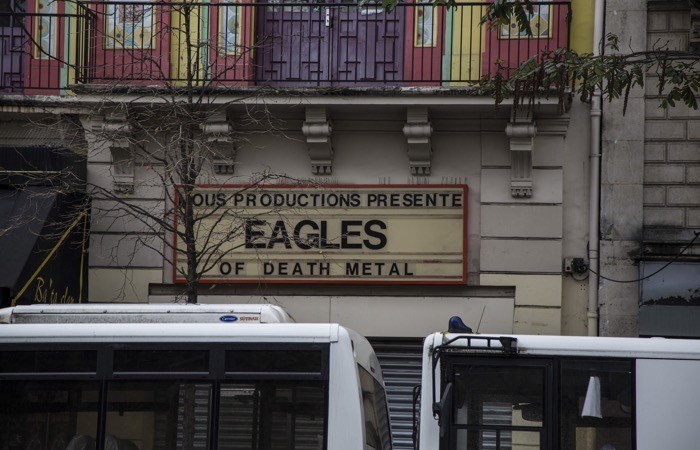 What really happened the night of November 13th at the Bataclan in Paris?  Now, the band says Bataclan security may have been in on the plot.

On the night of November 13th, the Bataclan in France was stormed by Islamic extremists who gunned down the place and killed nearly 100 people.  That’s the bloody history, and most assumed that the invasion was nearly impossible for Bataclan security to stop.

Or, maybe it’s not that simple.  Now, Jesse Hughes, lead singer of the band on stage, Eagles of Death Metal, says ‘six or seven’ Bataclan security personnel purposely missed work, with others looking deeply suspicious prior to the show.

Hughes offered more details during an interview with Fox Business News.  “When I first got to the venue and walked in, I walked past the dude who was supposed to be the security guard for the backstage,” the singer relayed.  “He didn’t even look at me.  I immediately went to the promoter and said, ‘Who’s that guy?  I want to put another dude on.’  He said, ‘Well, some of the other guards aren’t here yet.  And eventually, I found out that six or so wouldn’t show up at all.”

The Bataclan has yet to respond to the accusations, and an investigation by French authorities remains ongoing.  That said, the no-shows — if true — represent a scary bombshell in the case.

“Out of respect for the police still investigating, I won’t make a definite statement, but I’ll say that it seems like they had a reason not to show up.”

The Bataclan was ultimately raided by French special forces, who killed three gunmen.  An additional two committed suicide through the use of self-detonating explosive vests.