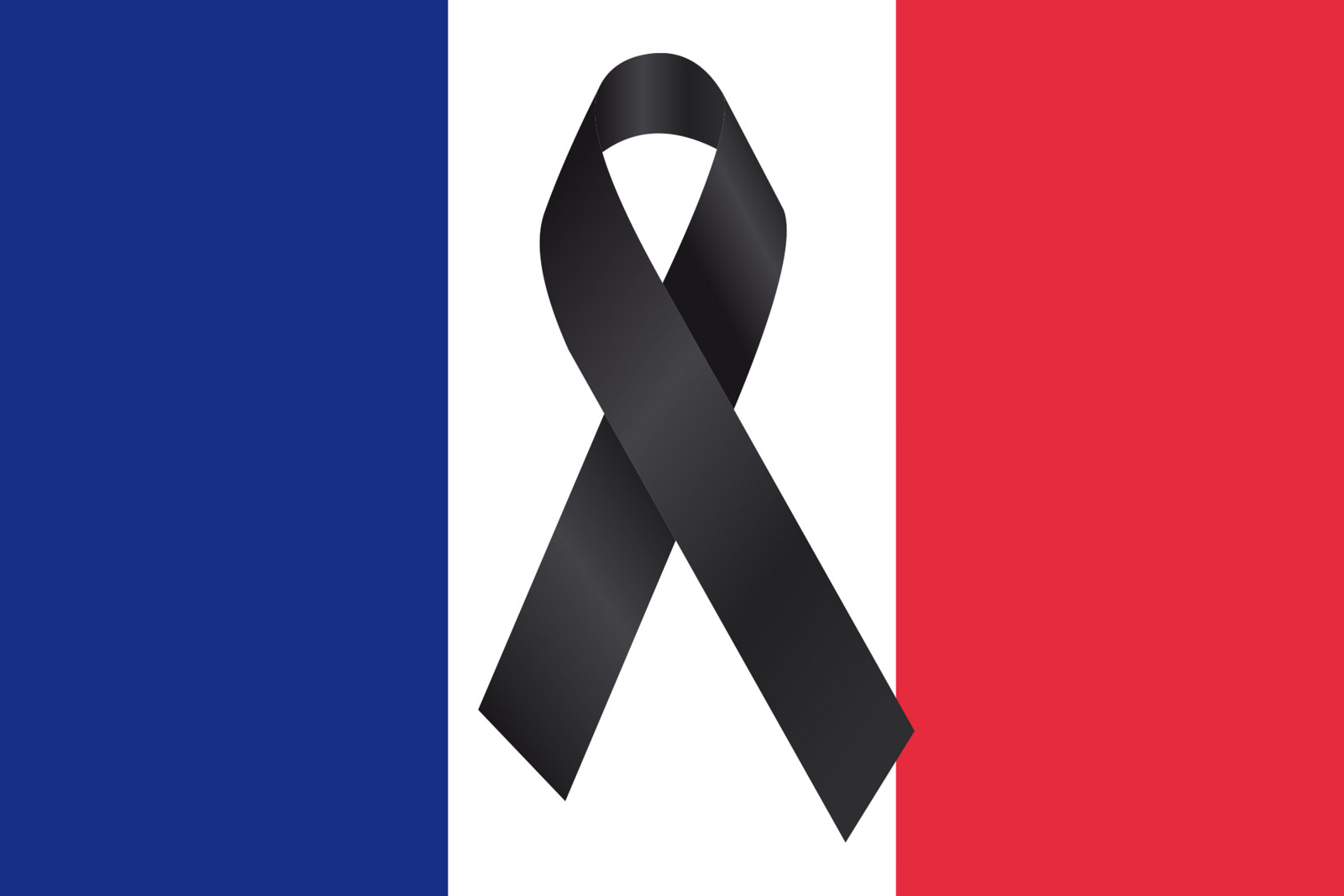 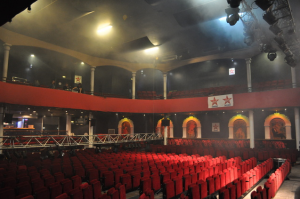 photo of an empty Bataclan; contributed by Xavier Delamare

Couple the night of the attack – please update us that these two are ok! 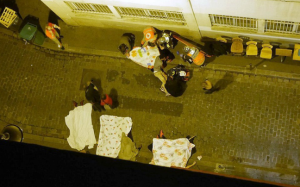 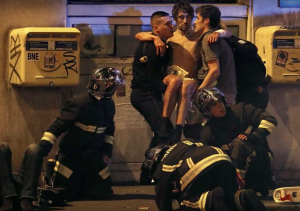 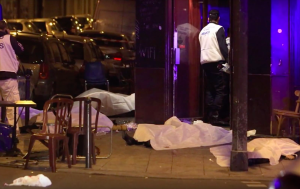 A summary of the situation.

I. Initial Reaction; Statements from Leadership.

François Hollande addressed nation early Saturday morning after declaring a state of emergency in France following the massive terrorist attack.  International borders were immediately sealed.  At Le Bataclan, site of a concert by Eagles of Death Metal, authorities raided the facility after several hours; the scene was described as a “bloodbath” by one witness at the show.  “It is a horror,” Hollande stated.

President Obama has urged Americans to stand strong and lent his moral support, though nothing close to the vows for revenge issued by Hollande.  Separately, Obama has met with world leaders, most notably Putin, and discussed the situation with Hollande.  “This is an attack on all humanity and the universal values we share,” Obama remarked from the White House, while vowing to chase any “terrorist networks” responsible.  “Those who think that they can terrorize the people of France or the values that they stand for are wrong,” Obama continued.

“We’re going to do whatever it takes to work with the French people and with nations around the world to bring these terrorists to justice, and to go after any terrorist networks that go after our people.”

Separately, the attack on Paris demonstrates an effective ISIS, with the downing of a Russian aircraft also a victory for the extreme Islamic organization.

France has already launched airstrikes against multiple Islamic State positions in Syria, with the French Defense Ministry reporting 10 fighter jets dropped 20 total bombs.  ISIS has vowed to step up attacks on France if the bombings continue.

“We know who these terrorists are,” Hollande initially stated. “These terrorists want to make us afraid and seize us with fear… This is a nation that defends itself.”

Politicians and the media were dancing around extreme Islamic ties, though this had the markings of extreme Islamic terrorism early on.  Multiple reports pointed to the gunmen screaming “Allahu akbar” (God is great), “It’s for Syria,” and other epithets.  Kalashnikov rifles were also reportedly used in the attack. 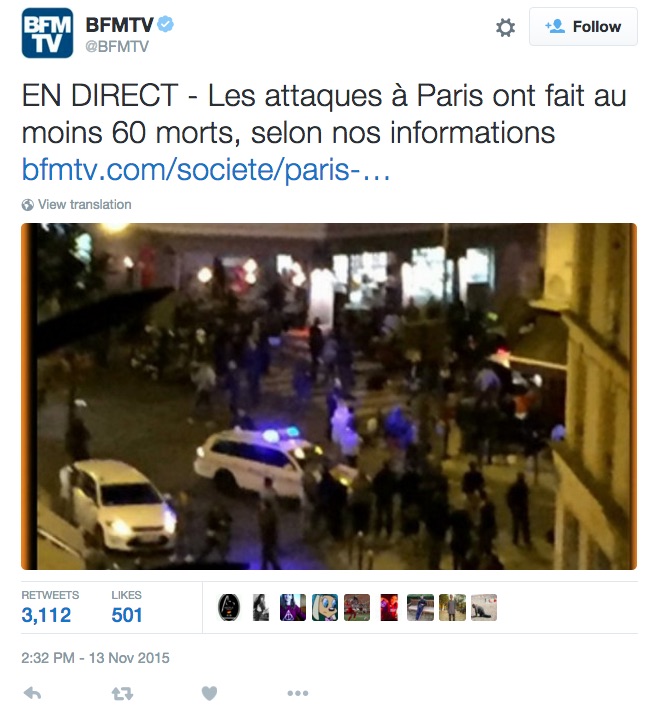 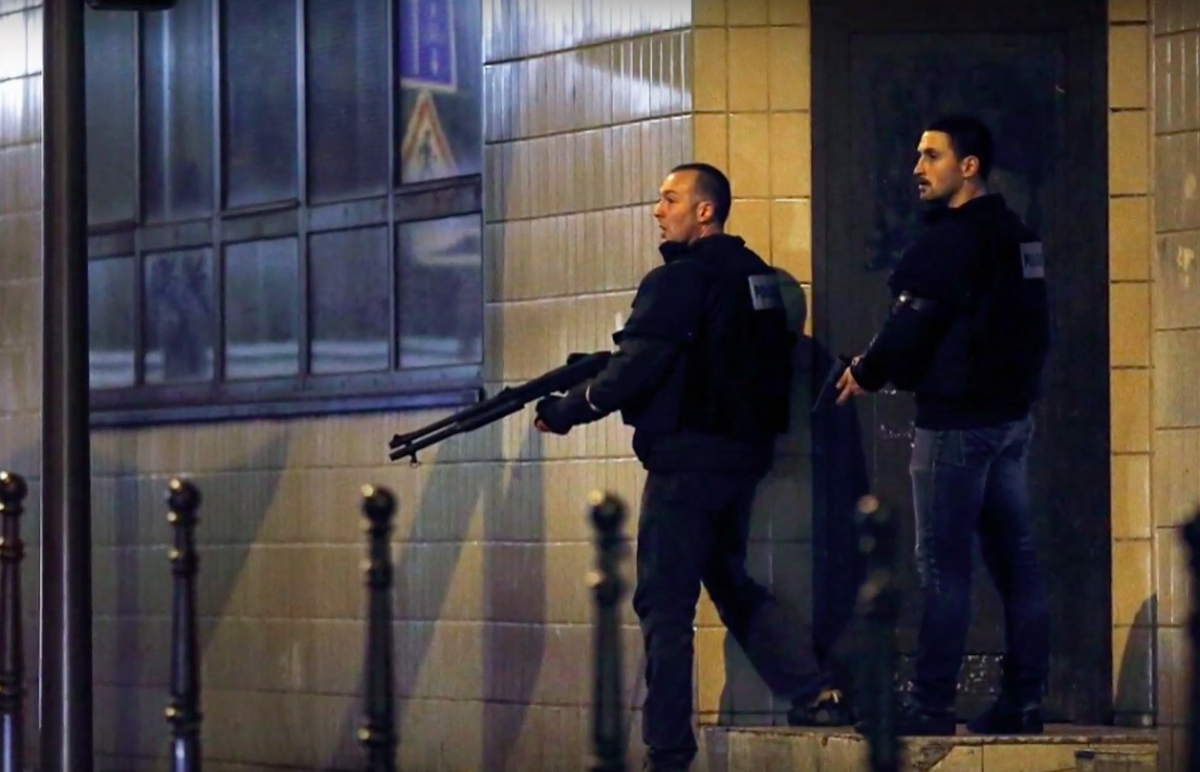 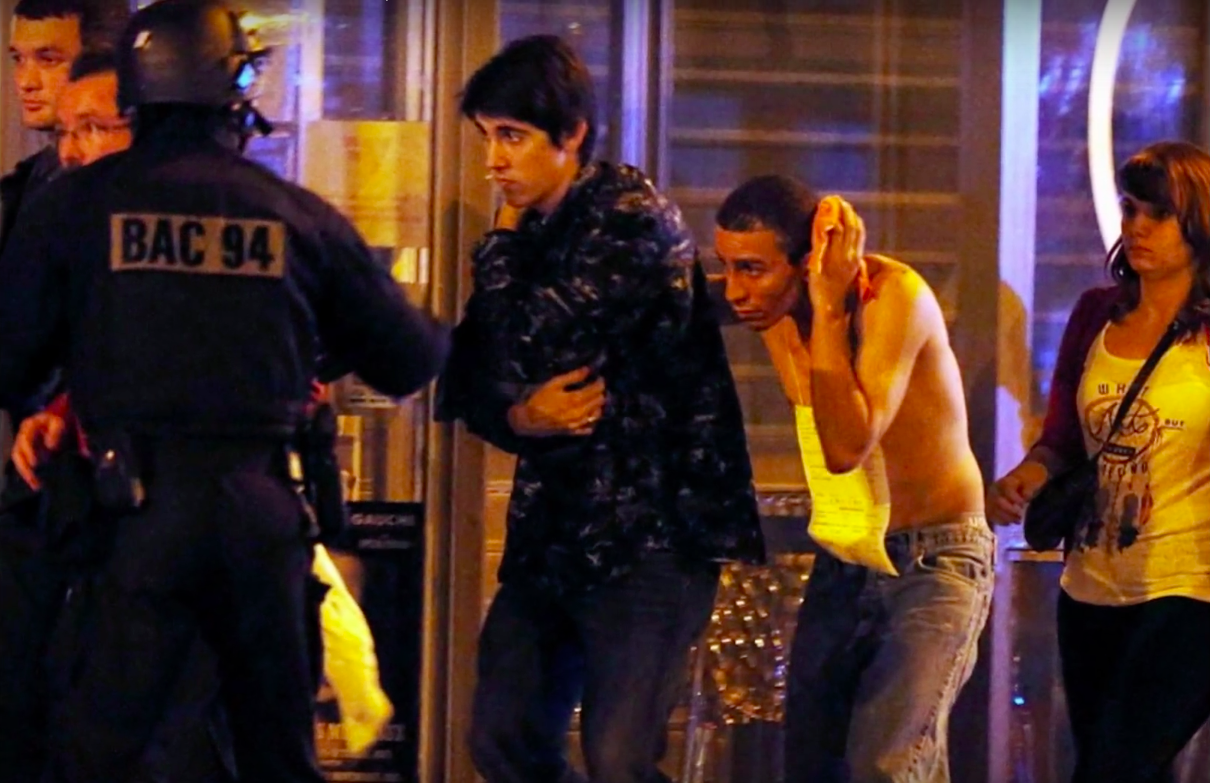 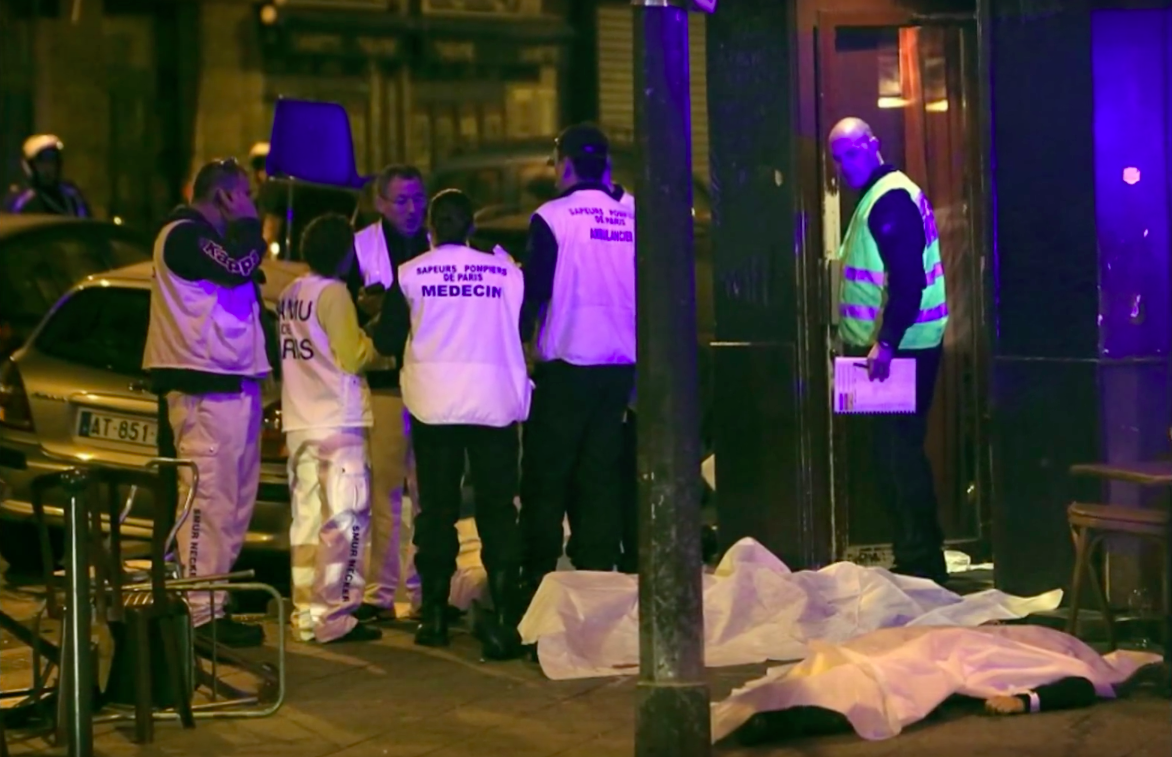 References to the radical Islamic-led attack on the offices of satirical paper Charlie Hebdo were quickly drawn.  That attack, in January of this year, involved the gunning down of multiple writers and staff members by Saïd and Chérif Kouachi, members of a Yemeni Al-Qaeda branch and Islamic extremists.  Members of the French police were also killed in that attack, billed as revenge for a cover illustrating and mocking Muhammed and strict Islamic law.

The attacks occurred at a show for the Eagles of Death Metal (from Southern California); the mass killings started several songs into the set, with the band apparently escaping backstage fairly quickly.  Radio journalist Julien Pearce told CNN that roughly 20 people were initially gunned down inside Le Bataclan arts center, while describing a ‘bloodbath’; that number has now swelled to 87.

Initially, Eagles were searching for all members of their touring crew.  It is now known that at least one member of the support staff has died, while members of the group itself have all survived.  The group’s location on stage made rear egress easy.

The situation at the Stade de France was less dire, though a small number have been counted dead.  Explosions outside the stadium initially confused attendees, many of whom ran onto the field in fear.  François Hollande was attending but was safely ushered away. 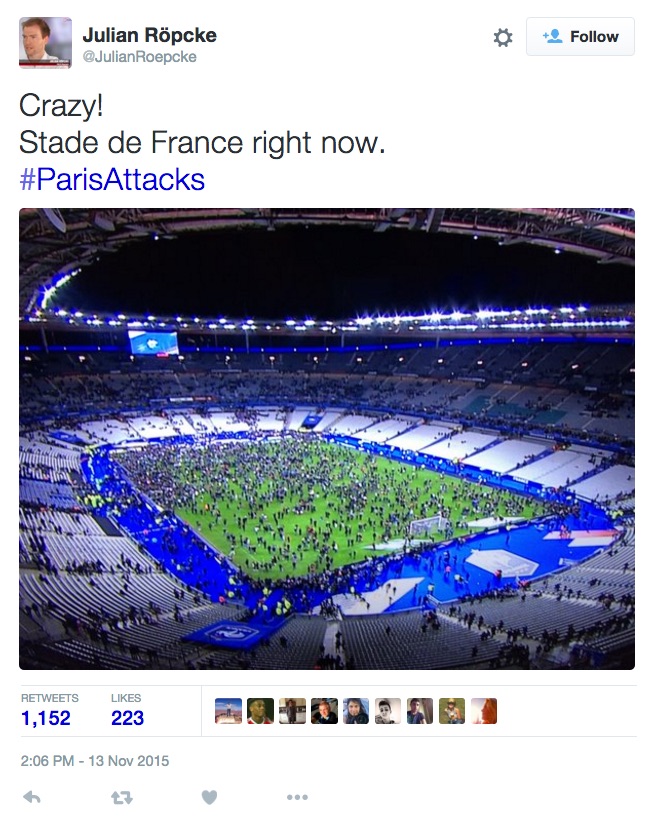 One of several restaurants attacked by gunman is Le Carillon, in Paris’ 10th arrondissement.  One or more gunmen opened fire in or around the restaurant; 40 reported dead in that attack.

VIII. No Credible Threats Against the US.

The United States has not received credible threats of an attack, though major metropolitan areas including New York remain on high alert.