Why Spotify’s Royalty War Is a Giant Industry Distraction 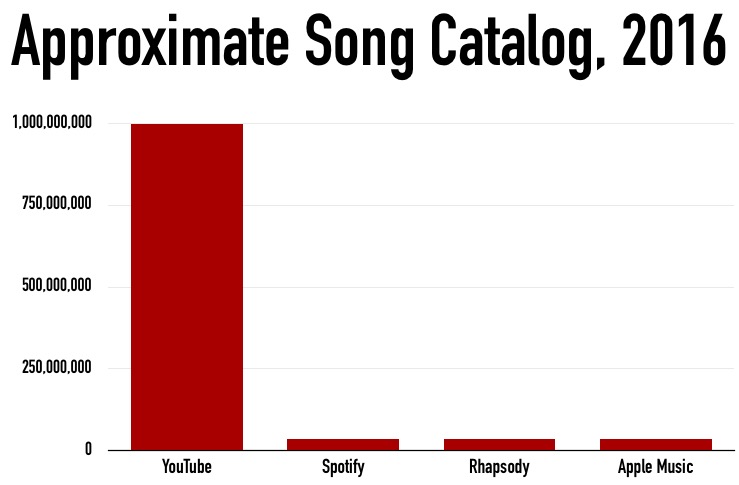 Is Spotify really the biggest problem the music industry has right now?

Spotify is constantly berated for paying meager royalties, or, not paying them at all.  Over the past few months, Spotify has been embroiled in a massive battle over unpaid mechanical royalties, with a $200 million class action sparking a major war between songwriters, publishers, and streaming services.

But that war may be distracting the industry from a far bigger problem: billions of hours of unlicensed, user-generated content that remains largely unrecognized and unpaid.

It’s not that Spotify shouldn’t pay the royalties it owes under the law.  It’s just that Spotify’s war obscures the large percentage of music that remains totally unlicensed, particularly UGC, or user-generated content.  Indeed, two of the most important music platforms today — SoundCloud and YouTube — are overflowing with remixed, or ‘derivative,’ content, with only a tiny portion of it actually licensed properly.

Spotify, meanwhile, is one of the highest-paying streaming music platforms, though it’s catalog can’t ingest remixed or UGC content at all because of licensing restrictions.  This is a serious problem for Spotify executives and investors, especially with competitors like SoundCloud trumping Spotify’s user totals and eclipsing their catalog selection.  Spotify simply can’t compete when it comes to UGC.

That is hardly an understatement: the most important song format is now shifting away from the original, studio-created version to the remixed, mashed-up, altered, or otherwise derivative version.  That’s a major shift in the way we interact with music, and it’s a shift that’s already happened.  In fact, YouTube recently noted that ‘mix music’ was its most searched-for category, across all video categories.

Meanwhile, YouTube commands as much as 52% of marketshare of all music streams, according to research estimates shared with DMN.  That dominance is largely predicated on the availability of nearly every song recorded, with SoundCloud enjoying nearly every remix created (at least those that aren’t getting torn down). 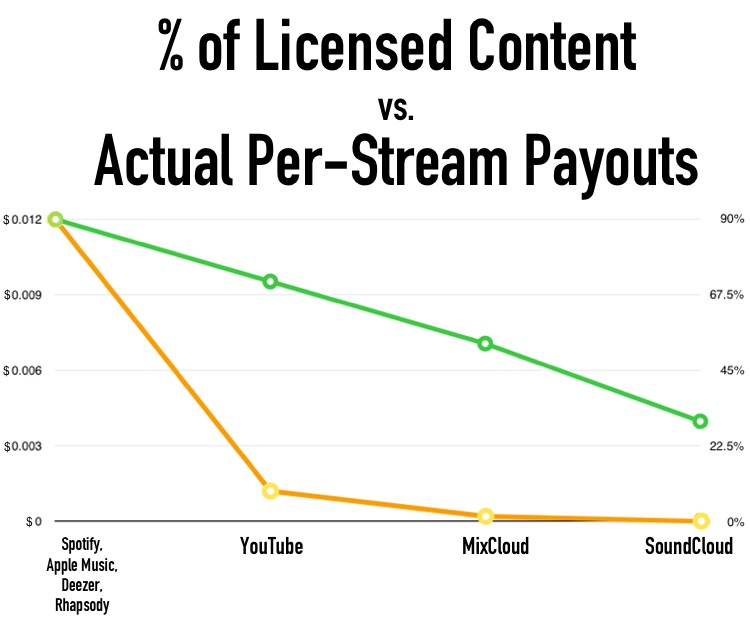 And here’s the problem with all of this: the highest-paying streaming platforms have the highest percentage of licensed, legitimate content, but the lowest total catalogs overall.  That means that the war over content licensing is happening

(a) on the platforms that pay the most (relative to other streaming services); and

“The dam has burst…”

Beyond the YouTube and SoundCloud whales, a number of similarly-oriented sites are ushering the real music revolution, one predicated on total fan participation, not to mention endless re-interpretations of original, first-run songs.  Indeed, platforms like MixCloud and Beatport have enjoyed meteoric rises (and huge valuations) based on UGC and remixed content, and that doesn’t even include a ballooning surge in podcasting.  “The dam has burst,” producer Mark Ronson relayed during his heavily watched TED talk.  “We live in the post-sampling era, we take things we love and build on them.”

That surge is creating billions of hours in totally unlicensed hours of music, with overlapping rights completely unaccounted for and unpaid.  This has been acknowledged by massive rights owners like Warner Music Group, who according to sources, are committing nearly 35 staffers to handle YouTube accounts alone, including ContentID disputes and complaints.

Sony Music Entertainment, which remains a holdout on SoundCloud licensing, is managing a similar quandary.

All of that raises the scary reality that the existing licensing infrastructure is totally inadequate and unprepared to handle this massive cultural shift.  Indeed, the ‘system’ can barely handle existing licenses around original content, which is now coming to the fore with the Spotify imbroglio.

One company attempting to solve this mess is Dubset Media Holdings, a derivatives rights licensing specialist.  Just this morning, Dubset Media kicked off a major relationship with Apple Music, a huge start to addressing this issue.  According to the deal terms, Apple will begin to ingest cleared, remixed content, with every sample track and artist capturing their sliver of the royalty pie.

Dubset Media, a DMN partner, envisions a better-licensed marketplace, and has constructed a rights exchange called MixBank that will power the Apple deal.  MixBank includes a registry for content owners, as well as a realtime scanning and clearance component, to enable quick licensing of remixed works.

The MixBank platform could eventually involve the participation of virtually all rights owners, including individual artists and songwriters, whose works can eventually be recognized and remunerated by platforms like SoundCloud.  “This is a very important day for the music industry,” Dubset Media CEO Stephen White told Digital Music News, speaking on the Apple deal.  “Until now the major music services could not offer DJ mixes and unofficial remix content in their services.”

Tiesto, one of the largest DJs on the planet, also chimed in.  “Delivering remix content to Apple Music through Dubset Media is an amazing development,” Tiesto relayed.  “Dance music fans are the biggest winners here because they will now have access to great remixes on the same platform that they listen to our original tracks.”

A similar deal could dramatically change Spotify as well.  But mega-players like YouTube and SoundCloud could also actually pay for the remixed content they offer, while pulling down content that simply isn’t authorized.  In essence, a digital marketplace that can easily license everything — original or derivative — could potentially rain billions in additional annual revenues, while further marginalizing the revenue drain from piracy.

It could also have serious implications for YouTube, whose ContentID is largely predicated on original works, but has difficulty picking apart the oftentimes multi-layered mixes of different tracks.  And this is where none of this makes sense: somehow, YouTube gets away with lackadaisical licensing or straight-up infringement that amounts to billions in unlicensed content, while Spotify gets excoriated for unpaid licenses that amounts to damages in the millions.  Perhaps the Apple Music deal is one small step towards leveling that imbalance.