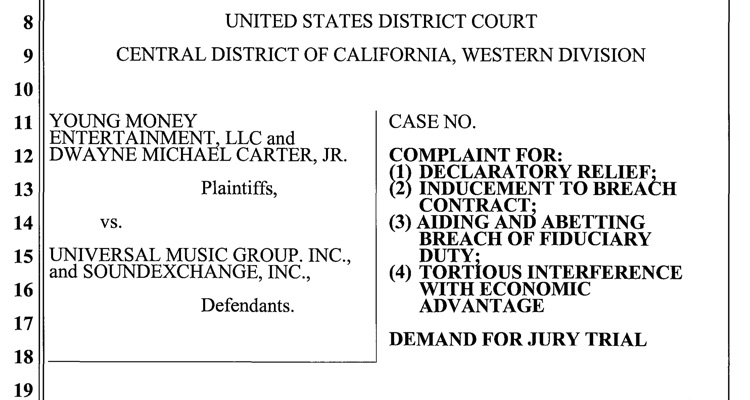 Yesterday, Lil Wayne filed a lawsuit against Universal Music, claiming that the label owes him tens of millions of dollars in unpaid royalties.

This all started when Lil Wayne’s Young Money label entered an agreement Universal Music’s Cash Money Records in 2003.  The aim of that agreement was to discover and nurture new artists into global stars, and expand on the massive impact Wayne enjoyed in the rap and pop worlds.  Wayne would find new artists, sign them to YMCMB (the joint venture), and both parties would share the profits.

Which brings us to the next part: Lil Wayne (real name Dwayne Carter) initiated legal proceedings shortly after the agreement expired, claiming Cash Money didn’t stick to the agreement.  Wayne claimed that in the signed contract, Cash Money agreed to pay a $10 million advance for each album ($8 million before recording and 2$ on completion), but this never happened.

In fact, Wayne allegedly received just $2 million of the $8 million recording advance for his Tha Carter V album – He didn’t receive anything else despite the album being completed. Wayne also claimed that Cash Money agreed to pay $200,000 a quarter for Young Money’s ‘overhead’ expenses, but also failed to make those payments.  As a result, Wayne filed a $51 million lawsuit, which is currently pending in Louisiana federal court.

Wayne’s new lawsuit states that Universal Music has been cashing in on millions of dollars that were earned directly from artists he signed to the label.  Artists like Nicki Minaj and Drake top the list, and Wayne is alleging that Universal Music is using the royalties from these artists to repay itself for the $100 million advances to Cash Money Records.

But, it doesn’t stop there, Wayne is also suing SoundExchange, the non-profit royalty collection organization that oversees digital radio royalties.