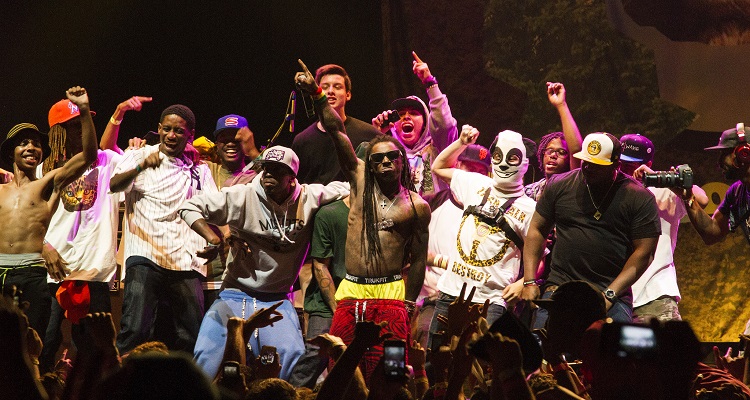 Chris Brown is now part of a narcotics investigation by federal authorities, with a $15,000 wire potentially resulting in felony charges.  Lil Wayne is also suspected to be part of the investigation.

Miami music producer Harrison Garcia loved posting images of himself on Instagram.  He uploaded photos of himself posing with Chris Brown and Lil Wayne, as well as shots of exotic cars and piles of cash.  Now, under trial for federal drug charges, federal authorities may have discovered damning evidence against the popular hip-hop artists.

The Miami Herald reports that Harrison Garcia said previously that the money was for drugs and the popular (but illegal) cough-syrup-and-soda mix ‘lean.’  A federal agent testified that following his capture last October, Garcia confessed to selling Lil Wayne ‘a lot of narcotics.’ The agent didn’t say more when Garcia’s defense attorney pressed for more details.

“It’s still an open investigation. I can’t talk about it.”

Back in December, we wrote about the massive (and illegal) pharmaceutical drug operation.  Garcia had allegedly sold the lethal lean, or ‘sizzrup’ drinks, via Instagram DMs.  Chris Brown reportedly hung out with Garcia, also known as ‘Cuban Harry’.  He would later appear on Brown’s ‘Cut It Baby (Freestyle)’ holding stacks of cash.

Garcia’s lawyers, Gustavo Lage and Percy Martinez, have suggested that their client didn’t deal drugs.  Instead, he only purchased the expensive items to showboat on social media, hoping to gain a massive following.  He used the guns ‘as props’ while dealing with an addiction to the drink made from promethazine with codeine.

“Some might say it’s a crime buying such expensive sneakers. But it’s not a crime, is it?”

Garcia also sent a screenshot of a deposit boasting the $15,000 deposit from “Christopher Brown.”

An unnamed woman texted back,

“what that for LOL”.

His defense attorneys fired back that agents were actually targeting the rappers in the investigation.  Lage told Agent Kevin Selent,

“You were very interested in the $15,000 wire transfer from Chris Brown.”

The trial will continue before U.S. Judge Patricia Seitz. If the accusations are true, authorities may soon go after Chris Brown and Lil Wayne.