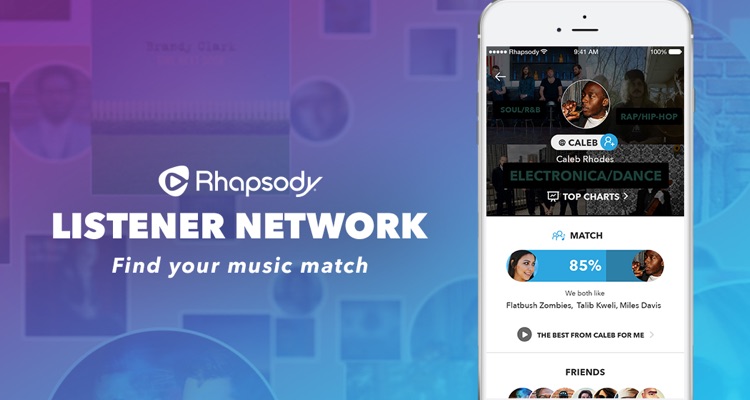 Today, Rhapsody launched ‘The Listener Network’, which is a new set of features designed to make music discovery fun and social.

The Listener Network is powered by Rhapsody’s patent-pending Music Intelligence Engine, which connects Rhapsody and Napster users worldwide to form a community which share tastes in music.  The new network also features a handy tool called Music Match which measures listeners’ music compatibility around the globe.  Once users connect with other people who match their music preferences it generates a unique and individual playlist of new songs based on shared taste.

There is also a Trending Today playlist on the home screen which is updated daily with music that is popular in the users’ network.

The addition of these new features are a great move for Rhapsody, especially if it engages users in a more game-like, social way.

Streaming services are upping their game to stay ahead in the market by continuously updating features in a bid to add value for users and differentiate themselves from competition.  Spotify has Discover Weekly, and the new Fresh Finds playlist which are both updated weekly, Tidal has playlists tailored to the users ‘mood’, like Relax, Love, and Focus, and even Soundcloud’s new subscription service Soundcloud Go has music categorized into genre as well as a ‘Trending Music’ playlist.

The last announced paid subscriber numbers for Rhapsody were 3.5 million.  If Rhapsody wants to gain a bigger share in the streaming market — like big players in the game Spotify (30 million) and Apple Music (11 million) — it will need to continue in this direction.  This will allow Rhapsody to compete more effectively and ultimately increase paid subscriber numbers moving forward.