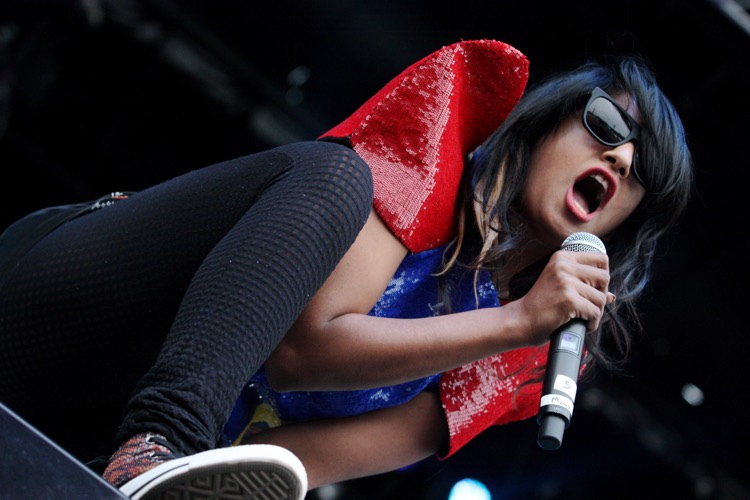 M.I.A. just lost a lucrative headliner slot. But did Afropunk go too far?

Sri Lankan rapper and singer M.I.A. has now been dropped by the Afropunk Festival after raising questions about the Black Lives Matter movement.  M.I.A., long an outspoken figure in hip-hop, was slated to headline the London-based event and is a major ticket draw.

Or, was a major ticket draw: “We are excited and honored to do our first Afropunk Festival in London and want to do it right,” Afropunk coordinators stated this weekend.  “After discussing the situation with the artist and the community, a decision was agreed upon by all involved that M.I.A. will no longer headline Afropunk London.”

The decision to drop M.I.A. comes after weeks of back-and-forth deliberation by Afropunk coordinators.  The initial controversy surfaced months ago, when the singer questioned whether Black Lives Matter was inherently exclusionary. “It’s interesting that in America the problem you’re allowed to talk about is Black Lives Matter,” M.I.A. said in April. “It’s not a new thing to me — it’s what Lauryn Hill was saying in the 1990s, or Public Enemy in the 1980s.”

The stirred a serious backlash, with Black Lives Matter proponents alleging racism while pointing to an attempt to minimize issues faced by black people.  But M.I.A., herself no stranger to controversy and conflict, simply reiterated her initial question.  “I’m not Muslim,” M.I.A. clarified.

“My question was, on American platforms what do they allow you to stand up for in 2016?”

That stirred calls to boycott M.I.A. alongside demands for Afropunk to drop the rapper.  M.I.A. initially offered to voluntarily withdraw, while continuing to question the premise of the Black Lives Matter campaign.  “Sorry I’m not doing Afropunk,” M.I.A. initially conceded.  “I’ve been told to stay in my lane. Ha, there is no lane for 65 million refugees whose lanes are blown up!”

That’s when things got confusing: at some point, the rapper apparently opted to remain in the Festival, shifting the pressure onto Afropunk to make a decision.  Perhaps torn between warring factions and sensing serious ramifications in ticket sales, Afropunk announced their decision to chop their headliner — and alter their entire bill in the process.

All of which sadly leaves Afropunk with a festival inherently divided and polarized by race, instead of unified by it.  But in its statement, Afropunk organizers pointed to a decision based on ‘educating one another, breaking down barriers, and sparking conversation,” while defending its efforts to protect its community:

Afropunk has always stood side by side with the thousands of people globally who are involved with our events each year, from the fans attending an Afropunk showcase for the first time, to the headline artists playing for capacity crowds on our main festival stages.

A key part of the Afropunk ethos has always been educating one another, breaking down boundaries and sparking conversation about race, gender, religion, sex, culture and everything that makes life worth living. This exchange has meant receiving wisdom, as well as imparting it in the most respectful way possible, with the participation of our entire community of fans, creators and artists. This community is something we are incredibly proud of, and this community will always be a priority for us.”

At this point, M.I.A. fans are likely to demand refunds after the abrupt yank.  But M.I.A. herself may have justification for seeking recourse, particularly if a contractual breach cannot be legally demonstrated.

Meanwhile, other musical artists are also finding themselves caught in the very messy crosshairs of an increasingly charged debate.  Just last week, a member of the singing group The Tenors altered the lyrics to the Canadian national anthem to include ‘All Lives Matter,’ a decision that stirred a deafening backlash.  The Tenors singer, Remigio Pereira, refused to apologize, while the group experienced numerous cancellations based on accusations of racism.  Pereira has been kicked out of the group.

Image by Moses Namkung from Outside Lands in 2009, licensed under Creative Commons Attribution 2.0 Generic.