Why Fetty Wap Is the Next Celebrity to Get Robbed 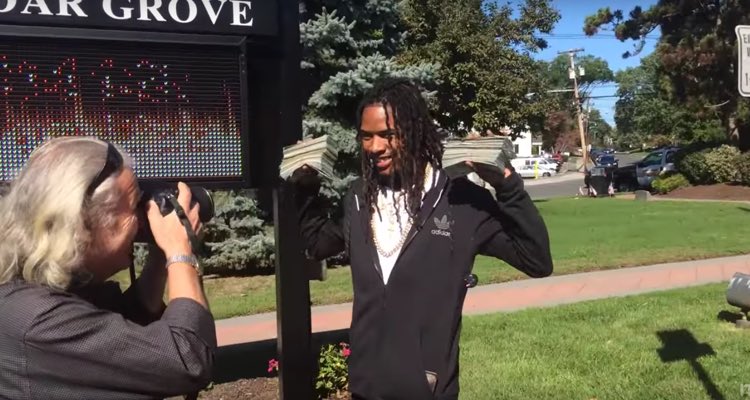 Flashing massive amounts of wealth isn’t just obnoxious, it makes you an easy target.  But is Fetty Wap really this stupid?

It was the perfect publicity stunt.  After receiving police fines totaling $320, rapper Fetty Wap flaunted the fine by bringing a stack of bills to the station.  The stack totaled $165,000.

Funny, and really effective.  After a YouTube video and a local report in NJ.com, news of the giant wad spread to TMZ, Reddit, and a dozen other outlets.  Not to mention Facebook and every other social network.  And just admit it: you’d spread this too.

It’s also a funny commentary on race relations and police tensions.  The $320 fine was actually for a raft of misdemeanors, including having tinted windows that were too dark and a malfunctioning home alarm.  So Fetty Wap brought a ridiculous stack to pay some ridiculous fines!

Here’s the 30 second video of his high-profile display, which included a photographer in tow.

So what’s wrong with this?

There’s serious doubt over whether Kim Kardashian was actually robbed in Paris.  But one thing’s certain: celebrities are immediately toning down their flashiness to avoid getting robbed, or even killed, for their possessions.  It doesn’t matter if it’s a $4.5 million ring, or $45,000 in cash.

In fact, Fetty Wap now has an extremely high chance of getting held up, simply because people can easily track his whereabouts.

That’s something everyone seems to be forgetting, even celebrities.  Plastering yourself across social media is proving extremely effective for a range of celebrities, whether Kim Kardashian or DJ Khaled.  People eat it up.  The only problem is that everyone know where you are, what you’re carrying, and oftentimes, where you’re going.

They also know what hotel you’re staying at, or even where you live.

Be safe out there Fetty Wap.