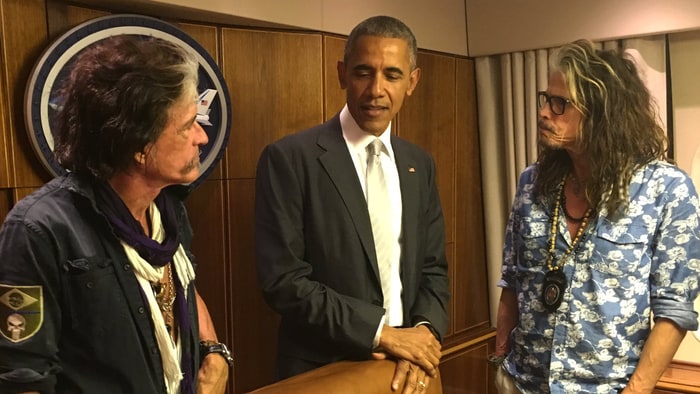 The 60s was a long time ago. Do politics really make sense for musicians anymore?

If you’ve read our guide, 17 Ways to Kill an Artist Career, well, ‘being overly political’ might be number 18.  Here’s why…

It was an amazing moment.  Steven Tyler and Joe Perry of Aerosmith had a chance meeting with Obama in Orlando.  Their jet from South America was landing on the same tarmac as Air Force One.

Maybe it was all carefully arranged.  Who knows.  But Steven and Joe posed with the President, and even sat on the steps of Air Force One.

Joe admitted that he’s conservative, but still thought it was ‘amazing’ to meet the Commander-in-Chief.  Classy and cool, deftly playing to all sides.  We’re all Americans!  Well played, Aerosmith.

But then something strange happened.  Aerosmith’s drummer, Joey Kramer, deleted the pics from the band’s Twitter account.  WTF?  Turns out he doesn’t like Obama, and decided to start a political war within the band.  “This is not representative of Aerosmith,” Kramer blasted.

Earlier, Tyler demanded that Donald Trump stop playing ‘Dream On’ at political rallies.  But I guess Kramer likes Trump.  Or something like that.  Which means people are going to take sides, and dislike Aerosmith for reasons that have nothing to do with their music.  In fact, both Trump and Clinton supporters now have something to hate.

All of which means the following for Aerosmith: fewer fans and less money!

It’s about the music, not the politics.  And if you need any more evidence of that, take a lesson from Beyonce.  Sure, what happened after Beyonce performance at the Country Music Awards last Wednesday night was sad.  Sad because there are still flat-out racists in this country.  They hate black people.  And they trolled CMA’s social media accounts and created a crisis.

But the blowback against Beyonce playing at the CMAs was a lot more complicated than that.  It wasn’t just blatant racism.  There was another layer, one focused on complicated issues like Black Lives Matter, police brutality, and other racial debates.

Forget about where you stand on these issues.  Or what Beyonce thinks about them.  There are lots of different opinions, these are complex issues.  And a lot of these country music fans now hate this artist because they disagree with her politics.  Not because of her music or performances.

That doesn’t mean they’re right, but it does mean they disagree.  Some of these people are simply racists, but most aren’t.  A lot of them can logically and coherently disagree with Beyonce’s positions.  And a big chunk of these people will never support Beyonce, ever again.

And that could shorten Beyonce’s career.

Is that worth it?

It makes me wonder whether it makes sense for artists like Beyonce to take strong political positions.  This isn’t the ‘us-versus-them’ 60s.  It’s not the anti-corporate grunge 90s.  It’s a brawl, everyone’s fighting and disagreeing, the volume is now cranked to 111.  And the channels for information, opinion, and debate are hundreds of thousands of times larger than they were fifty years ago.  Or even twenty years ago.

It’s not just your uncle that has an asshole — I mean opinion — anymore.  It’s millions of people blasting their opinions across thousands of different channels, every second.

The world isn’t Walter Cronkite and the Sandusky Register anymore.  The opinions aren’t vetted and one-way.  It’s 24-hour CNN, FOX, CNBC, Huffington Post, Drudge… TMZ.  Facebook, Twitter, YouTube, podcasts, and thousands of other information sources.  The trickle is now a non-stop avalanche, and everyone’s asshole opinion is out there.

Do we need another one from our musicians?

But what does Coldplay think?

I have no idea!  And that’s the point.  I just went to see them play a packed Rose Bowl in Pasadena.  They sold out two nights.  It was a big, giant American tent.  Chris Martin even tied a bandana of the American flag around his guitar.  Who’s gonna disagree with that!?

Every cross-section was there: older people, younger people, gay, straight, red state, blue state, foreigners, couples.  They wanted to be entertained by hits, lots of them, and a charming frontman.

And they didn’t care about Chris Martin’s politics!

But they were more than willing to pay $75 a seat, $14 a beer, and $22 for parking.  And they left happy.  They sold out both nights!  And barring disaster, Coldplay will be the next Rolling Stones, playing the same packed arenas ten, twenty, even thirty years from now.

Will Beyonce sell out both nights at the Rose Bowl in ten years?