Amazon Music Unlimited Launches in the UK, Germany, and Austria 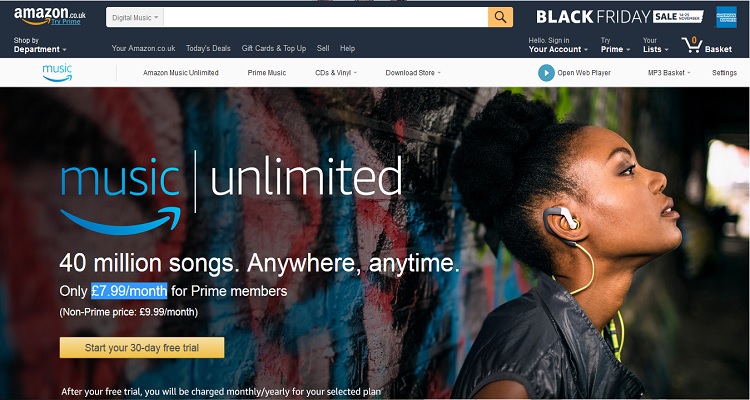 Amazon Music Unlimited isn’t only unlimited in the U.S. anymore.

Back in October, Amazon Music Unlimited suddenly launched in the United States. The biggest surprise didn’t come from its unexpected launch, but rather, it’s three-tier price plan not offered by any of its competitors like Spotify and Apple Music. The on-demand streaming service offered a $9.99 monthly plan for normal users, a $7.99 price for Prime users (or a $79/yearly plan), and a $3.99 plan for Echo-only users. However, e-commerce giant Amazon isn’t only looking to dominate U.S. shores.

As of writing, the service is now available in the U.K. with similar pricing. The service offers around 40 million songs on demand. Non-Prime users will pay £9.99/month, with a discounted price of £7.99/month for Prime users. For Echo home speaker/interactive voice hubs, users will pay £3.99/month. Of course, there’s a 30-day free trial available, as well. Amazon Music Unlimited will also launch later today in Germany and Austria.

“Amazon Music Unlimited brings real value to the millions of people in the UK who are already Prime members, with a choice of subscribing for only £7.99 a month or even £79 per year. And if you want a sense of the future of voice-controlled music, go ahead and ask Alexa for a free Amazon Music Unlimited trial, and play around on your Echo. If you don’t know the name of a song but know a few lyrics, if you want to hear songs from a specific decade, or even if you’re looking for music to match your mood, just ask. Our U.S. customers love Amazon Music Unlimited on Echo, and we think our UK customers will too.”

However, since the service’s launch here in the United States, we haven’t received any official numbers. Amazon has skirted the issue of actual numbers. Most likely, this is due to most users probably still under the 30-day free trial. However, in a Forbes article titled, Don’t Be Fooled by Amazon Music Unlimited’s Price, Bobby Owsinski asks,

“Just like Apple, Amazon has an enormous number of credit cards on file (estimated at 300 million), but that doesn’t mean that a large percentage of them will automatically subscribe to a new offering, as we saw with Apple Music. That said, it’s good to have another deep-pocketed competitor in the streaming music space, since it was starting to look like a two horse race with Spotify and aforementioned Apple Music. The question is, will music consumers feel the same way?”