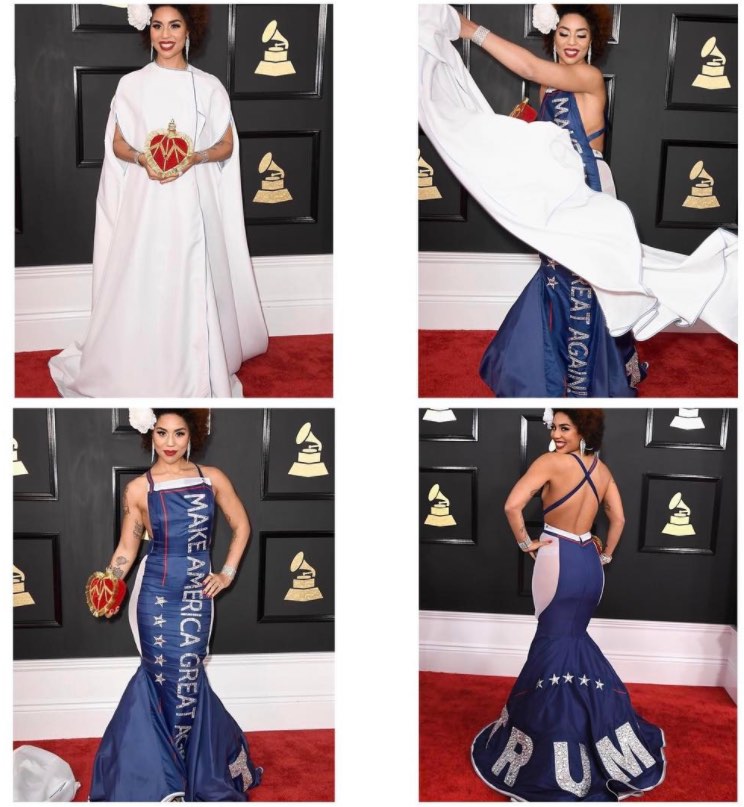 A pro-Trump ‘Make America Great Again’ dress at the Grammys is translating into a lot of money for Joy Villa.

At the 59th Grammy Awards, Bruno Mars performed a tribute to the late Prince.  Adele stole the night with 5 Grammys, beating out Beyonce in several categories.  Yet, the singer most people talked about was Joy Villa, thanks to her pro-Trump ‘Make America Great Again’ dress.

Now, this controversial outfit is making Joy Villa a lot of cash.

Following the Grammys, sales for Villa’s 2014 album I Make the Static skyrocketed in Amazon and iTunes sales charts.  In just two days, her $4.95 album sold 15,000 copies.  Apparently, Joy Villa captured Trump supporters’ attention as they wrote favorable reviewers for her support of the current President.

Billboard wrote that if current sales figures continued, Villa would debut on the Billboard chart for the first time.

Billboard’s predication came true.  I Make the Static debuted in the top 15 of the Billboard 200 chart. For the week of March 4, Joy Villa landed at the No. 12 spot.  Her album earned 29,000 equivalent album units.

Ultimately, the set sold 27,000 copies, all from digital downloads.  Her 2014 album only made ‘a negligible amount’ prior to the Grammy Awards. Based on these numbers, her album generated over $100,000 in revenues after distributor cuts.

In Top Album Sales, Joy Villa landed at the No. 6 spot, just underneath Adele’s ‘25’ and Beyonce’s ‘Lemonade.’ Her album beat out established artists’ albums, including Lady Gaga’s Joanne, Reba McEntire’s Sing It Now, and even the La La Land Soundtrack.

I Make the Static came it at number one on Top Rock Albums and Alternative Albums, beating out Twenty-one Pilots’ Blurryface. The album also faced fierce competition from Metallica’s Hardwired…To Self-Destruct and Red Hot Chili Peppers’ The Getaway.

Villa also beat out Ed Sheeran’s X and Lady Gaga’s The Fame on Catalog Albums.  And despite Adele’s wins at the Grammys, 21 came in at No. 4.

According to Billboard, the greatest share of album sales for the singer came on February 13th, the day after the Grammys.  I Make the Static enjoys 4 star out of 5 reviews on iTunes, out of 1,695 ratings.  Current reviewers for the album still come almost entirely from Pro-Trump supporters. They read,

I bought this album to support a brave and beautiful artist! She stood up for what she beilved in, despite the madness.

Glad I bought this album!”

But can the Trump bump sustain a career?   Despite its current success, industry forecasters expect the album to drop well below No. 100 in the second chart week.