Why Foreign Artists Are Freaking Out About SXSW 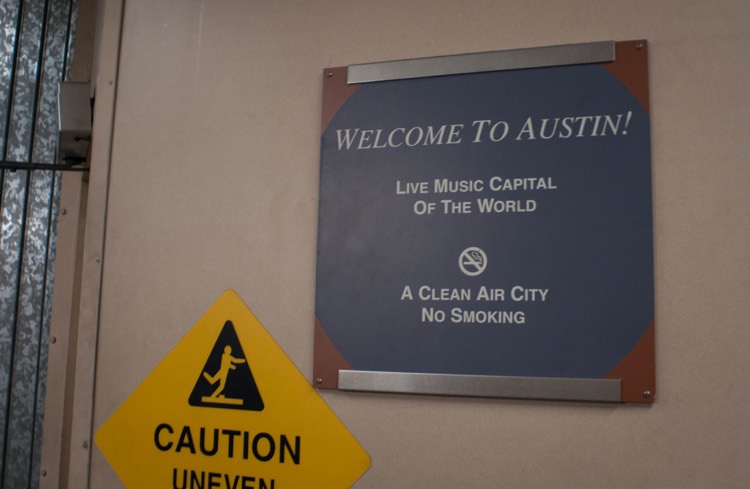 If you’re an international (non-US) artist with plans to travel to South by Southwest (SXSW), should you reconsider those plans?  A look at the potential dangers involved.

If you’re just catching up on this controversy, here’s the snapshot.  An indie band recently freaked out after reviewing their South-by-Southwest (SXSW) contract.  The band felt that language in the SXSW band agreement contained extreme and threatening language relating to US Immigration and foreign visas.

So, they pulled out.

The suspect language starts at the bottom.  It (strongly) suggests that South by Southwest organizers will be reporting international artists to federal authorities. 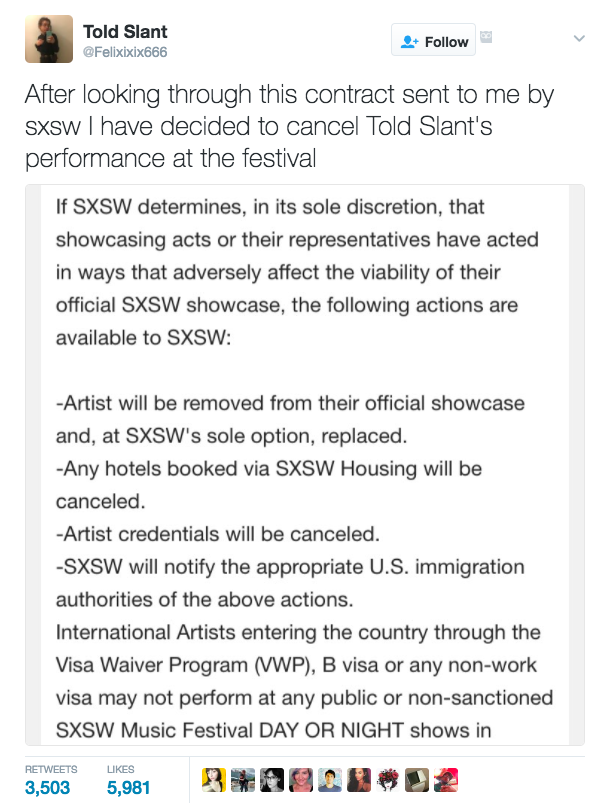 SXSW responded.   They said that language has been in the boilerplate artist agreement for years.  And like many contracts, the language is designed to prevent extreme problems.

Roland Swenson, South by Southwest’s co-founder and CEO, called the blow-up a “misunderstanding of our policies regarding international artists.”  Here’s his statement to the Austin Chronicle.

“Language governing SXSW’s ability to protect a showcase has been in the artist performance agreement for many years.  It is, and always was intended to be, a safeguard to provide SXSW with a means to respond to an act that does something truly egregious, such as disobeying our rules about pyrotechnics on stage, starting a brawl in a club, or causing serious safety issues.”

But then, he added this zinger.

“We understand that given the current political climate surrounding immigration, the language that was published seems strong.  Violating U.S. immigration law has always carried potentially severe consequences, and we would be remiss not to warn our participating acts of the likely repercussions.  We hope never to be put in the position to act on this.”

South by Southwest isn’t out to get you.  It’s a music festival in an extremely liberal pocket of Texas.  Roland doesn’t have any plans to round up foreign bands or anyone else attending from foreign countries.

In fact, Roland has spearheaded efforts to actively protect foreign artists.  They even have an army of lawyers ready to deal with situations as they arise.

They’ve even said that out loud.  “[South by Southwest] is working hard to build a coalition of attorneys to assist artists with issues at US ports of entry during the event,” Swenson told Stereogum. “We have artists from 62 countries from around the world performing and have always supported our international music community. We have never reported international showcasing artists to immigration authorities.”

This shit is bad for business and everything SXSW stands for.  And SXSW is doing what they can.  But at the same time, they’re also warning international artists to prepare for the worst.  Because SXSW’s lawyers can only do so much to help you.  You might get caught up.

If the US Immigration, the US Government, or any other agency (official or otherwise) starts some beef with you, you might be on our own.

Is SXSW going to fight for you if you are detained, arrested, or hassled?  Or will they be good boys and comply with whatever the State of Texas or United States demands of them?  Right now, we have no idea.  It really depends.

Keep in mind that FBI director James Comey will be doing a keynote interview at this event.  They’ll be massive security, on the ground and in the air.  People will be checked, monitored, even cross-examined.

The airport will be a high security zone.

This isn’t a fun little music event anymore.  It’s a massive mega-festival with pervasive problems of violence and crime.  There have been major crowd control problems over the years.  Not to mention shootings and even high-speed police chases with dozen injured or killed.

I know, that’s not the ‘rah rah’ version of what SXSW is.  I’m supposed to write about showcases and great BBQ.  But the reality is that there will be a ton of cops —local, state and federal — crawling at this event to make sure shit stays under control.  And things sometimes get out of control.

+ A White Man Explains Beyonce and The Grammy Loss

Is there a problem with your non-work visa?  Maybe there’s a detail that lots of traveling artists are unaware of.  Getting detained, busted, or otherwise harassed isn’t worth the risk.  Especially for something you can’t predict.

But maybe there isn’t any problem, outside your band being from outside US.  Will we hear about a band being detained in nearby Dallas, while missing their showcase over some nonsense?  Or maybe a band will be attacked outside of a showcase because of the way they look.  There’s a pretty decent chance.

Is that worth the risk?

Hey, if you still decide to go I understand.  I just don’t think it’s the right climate, or the right time to do it.  And I don’t think SXSW can protect you as much as they think they can.

Here’s some additional information on various visas, as well as SXSW FAQs on international travel: