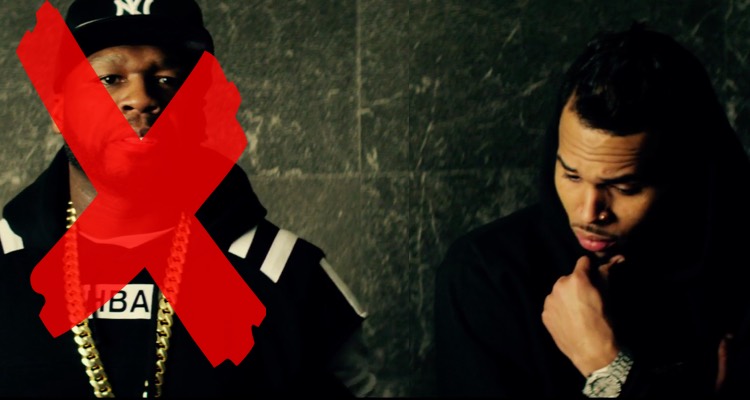 Looks like 50 Cent is officially out of Chris Brown’s ‘Party Tour’.  What happened?

Did Chris Brown just turn another ally into an enemy?  As of early this morning, 50 Cent is officially out of Chris Brown’s upcoming Party Tour.  50 Cent’s name has been removed from all Party Tour dates across the United States.

A quick survey of the two-month tour on Ticketmaster shows that 50 Cent has now been deleted from all tour stops.  No refunds or concessions are being offered to ticket buyers, even those who purchased tickets to see 50 Cent.

At this stage, neither party has offered any explanation for the cancellation.  The pair has collaborated numerous times in the past, including the song ‘I’m the Man’ and ‘No Romeo No Juliet’.  50 Cent has also defended Chris Brown in the past, on numerous occasions.

After Chris Brown pointed a gun at one of 50 Cent’s party guests, 50 quickly pointed out that the accuser — Baylee Curran — was trying to steal items from his home.  “This bitch was trying to steal something, got kicked out, then called the cops,” 50 Cent wrote on Instagram. “Smh. You can’t make this shit up.  Lol.”

50 Cent has also been supportive in other settings.  But a long list of other prominent rappers have distanced themselves from the rapper.  That includes heavyweights like Drake and Jay Z, who sharply criticized Brown after he leveled a defenseless Rihanna.

Others have flat-out blasted Brown as a ‘punk ass pussy bitch’ who would wither in a fight against someone his own size.  Now, the question is whether 50 Cent is joining those critics.

Meanwhile, there are no known changes to the other ‘Party Tour’ collaborators.  Fabolous, O.T. Genasis and Kap G are all still listed, at least according to Live Nation’s site.