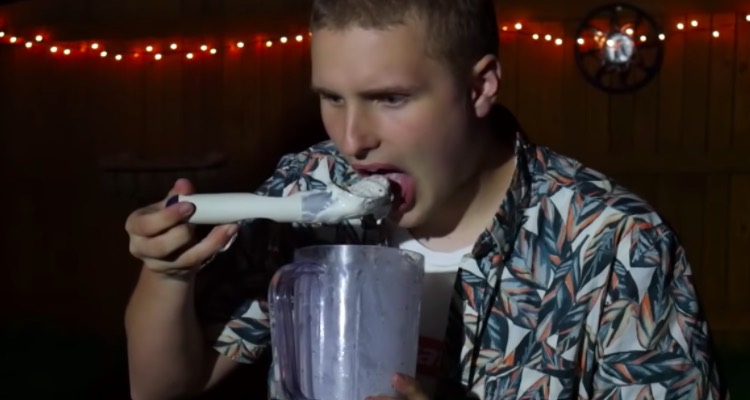 Rumors were spreading that Kendrick Lamar was dropping an album on Easter.  Here’s the fan that offered to eat his hat vinyl if that didn’t happen.

Please note: we apologize in advance for writing this post.

Would you eat vinyl for the right artist?  Of course you wouldn’t.  But this guy did.  Here’s his story.

The whole thing started with a vicious rumor, borne in extreme Kendrick Lamar fandom.  On Reddit no less.  After Kendrick dropped a brand-new album on Friday (i.e., Good Friday), a theory emerged that another album was slated for Easter delivery.  Other rappers, most notably Frank Ocean and Future, recently dropped back-to-back albums.

The Friday album was titled DAMN, and actually featured a fictional murder in Lamar at one point.

+ Note to Self: Never Remix the Muslim ‘Call to Prayer’ In a Tunisian Club

The theory gained steam with the religious holiday.  As Good Friday denotes Christ’s death and Easter his resurrection, fans postulated that Kendrick Lamar was planning a similar arc.  And, commemorating both moments with a full-blown album.

Hence the best, which started on a Lamar subreddit (because of course it did).  The fan, Cousin Tyrone, promised to consume vinyl in the presence of others if the ‘resurrection’ did not occur.

So here’s a video of a guy eating blended vinyl in a milkshake format.

Here’s the report roughly 16 hours after the point of consumption.

“I took A LOT of laxatives to help pass the vinyl as fast as possible. It’s been around 16 hours since I did this and I’m still feeling the effects of it.

Overall, I do not recommend eating vinyl. I’ll answer more questions if you have any.”

No response yet from Kendrick Lamar.