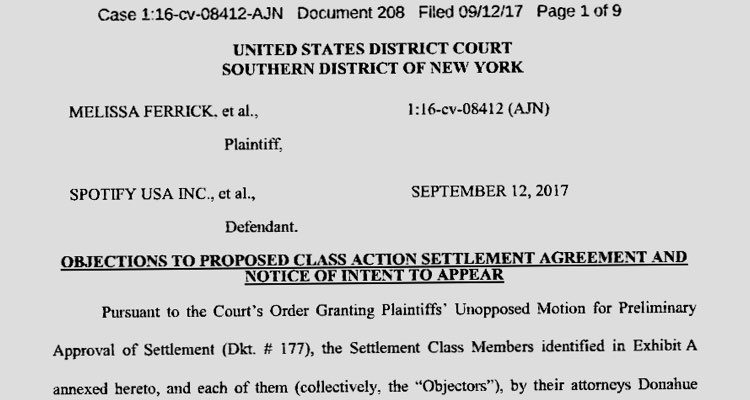 Last week, major music publishers promised a war against Spotify.  But it looks like another army has beaten them to the punch.

In paperwork filed in federal court this week, more than one hundred musicians and songwriters demanded that Spotify pay its fair share of publishing royalties.

And yes — the specific royalty in question is the ‘mechanical’ reproduction royalty.  Spotify has now declared that reproduction rights don’t apply to them, but potentially billions in legal damages say otherwise.  And the list of artists demanding compensation is enough to create a serious public relations nightmare.

The list of protesting artists is impressive: Tom Petty, Zach De La Rocha and Tom Morello of Rage Against the Machine, Dan Auerbach of the Black Keys, Rivers Cuomo of Weezer, David Cassidy, the heirs of Sony Bono, Kenny Rogers, and Kim Gordon.  Even Anthony Hopkins, who apparently moonlights in classical composition, is on the list.

Shepherding the rebuttal is Wixen Publishing, just one of a number of publishers upset with Spotify payouts.

At root is a recently-drafted, $43 million settlement over unpaid mechanicals.

This was actually signed before Spotify decided that the entire mechanical license was bullsh-t.  But the $43 million accord, one of two major agreements surrounding mechanicals, seemed to offer Spotify an easy escape from a harrowing licensing dispute.  But that was wishful thinking.

Now, the overwhelming sentiment is that $43 million is an insult.

“The Settlement Agreement is procedurally and substantively unfair to Settlement Class Members because it prevents meaningful participation by rights holders.  It offers them an unfair dollar amount in light of Spotify’s ongoing, willful copyright infringement of their works.”

Actually, this isn’t even a $43 million settlement, according to the plaintiffs.  After legal fees, the entire class of writers and publishers have $28.7 million to pick from.  After dividing that by over 7.5 million potential claimants, and the per-award fee is about $3.84.

At least that’s the logic of the filing:

The blowback could make a settlement impossible.  In the unlikely event that the agreement stands, none of these people will buy into the settlement.  Instead, they’ll pursue separate claims, with damages reaching $150,000 per infringed work.

Actually, that’s already happening on a separate front.  Back in July, Bluewater Music Services and Bob Gaudio decided to file their own lawsuits, with damages approaching $365 million.  The led to Spotify’s eventual decision to challenge the entire license itself, with Bluewater & Co. now bristling back and rallying additional publishers to the fight.

All of which makes this a multi-billion dollar war — one that is only just beginning.

Now about that IPO…