Guitarist At Las Vegas Shooting: I Was Wrong To Oppose Gun Control 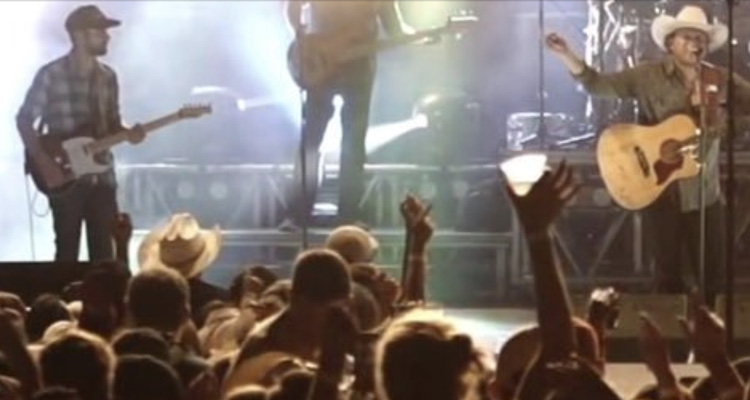 Josh Abbott Band’s guitarist, Caleb Keeter, who performed at the Route 91 Harvest Festival in Las Vegas on Sunday — just hours before Stephen Paddock killed 59 people and injured 520 — has flipped his stance on gun control and support for the 2nd amendment.

Caleb Keeter, an adamant, lifelong supporter of the 2nd Amendment, took to Twitter Monday morning to express his newfound awareness and enlightenment:

“I’ve been a proponent of the 2nd amendment my entire life. Until the events of last night. I cannot express how wrong I was.” – Caleb Keeter, Josh Abbott Band guitarist.

He went on to say that some of his band and crew members actually had firearms on the bus, but couldn’t touch them for “fear police might think we were part of the massacre and shoot us.” He concluded “My biggest regret is that I stubbornly didn’t realize it until my brothers on the road and myself were threatened by it.”

His full statement is below:

“I’ve been a proponent of the 2nd amendment my entire life.

Until the events of last night. I cannot express how wrong I was. We actually have members of our crew with CHL licenses, and legal firearms on the bus.

We couldn’t touch them for fear police might think we were part of the massacre and shoot us. A small group (or one man) laid waste to a city with dedicated, fearless police officers desperately trying to help, because of access to an insane amount of fire power.

Writing my parents and the love of my life a goodbye last night and a living will because I felt like I wasn’t going to live through the night was enough for me to realize that this is completely and totally out of hand. These rounds were powerful enough that my crew guys just standing in a close proximity of a victim shot by this fucking coward received shrapnel wounds.

My biggest regret is that I stubbornly didn’t realize it until my brothers on the road and myself were threatened by it.

We are unbelievably fortunate to not be among the number of victims killed or seriously wounded by this maniac.”

You are all absolutely correct. I saw this happening for years and did nothing. But I'd like to do what I can now. https://t.co/5mYA7D90X3

It's frustrating that some don't call the fire dept until the blaze is at their own front door. But we need more ppl on our side. Welcome.

An important point he realized, I think, is this experienced shattered the sad myth he held that more guns could prevent/help these attacks.

Seconded. Thank you, Caleb, for your courage to speak publicly, especially in the aftermath of your own trauma. We're with you.

I guess for some people, it takes getting shot at to support any kind of gun reform.

But hopefully he can now bring awareness and understanding to other adamant gun rights supporters that it is time for America to wake up.

There is no reason people need military style assault rifles.  Especially not 17 (the number of firearms the found in Paddock’s hotel room).  There is no reason there shouldn’t be universal background checks and waiting periods.  It’s astounding how many people are blind to this — until they are shot at by a mass murderer.

America is the only developed nation in the world with an endless stream of mass murders.

It’s time to put politics aside and implement what the experts say need to happen to stop these kinds of tragedies from continuing.

Not what the NRA says.  Not what the gun industry says.  What the non-partisan experts who study this say.

Don’t merely analyze the shooters, analyze the means.  Guns are the common denominator with mass shootings.  People thought Obama would take away their guns.  Gun sales were never higher than during the Obama years because the NRA and conservative outlets scared their base into thinking Obama was going to take away their guns.  He didn’t.  And now, today, gun stocks are soaring because after every mass shooting gun sales skyrocket.  That’s disgusting.

People profiting off of these tragedies should be ashamed of themselves.

I’m honestly confused how people can continue to defend absolutely zero gun reform and merely send “thoughts and prayers” as if this is now inevitable.  This is now America.  If you’re truly a patriot you’d want to do something about it.

I appreciate that Keeter has now been shaken out of his ignorance.  And I applaud him for admitting he was wrong and bringing light to this issue.  We are all wrong at various points in our lives.  But it takes someone with true courage to publicly admit it.

In this case, Keeter is helping change the course of America.