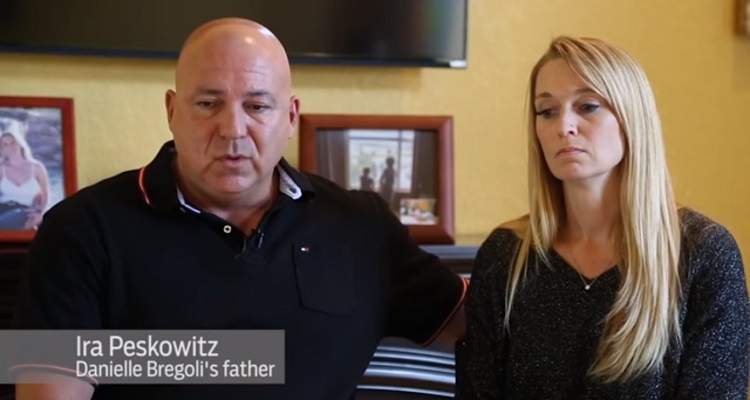 Has the Cash Me Outside girl’s management team fabricated a talent that she may not have?

In her first single, ‘These Heaux,’ Danielle Bregoli (aka Bhad Bhabie) proudly rapped about the money that she had.

“I ain’t nothin’ like these hoes / Don’t compare me to no one / Money green like Cee Lo / Yeah my pocket so swollen.”

Weeks later, the ‘Cash Me Outside’ girl (as she’s best known) landed a multi-million dollar deal with Atlantic Records.

Yet, some people would say that compared to other hard-working artists, the 14-year-old rapper doesn’t deserve her success.  Especially her father.

The ‘Cash Me Outside’ girl’s father shares his concern over his daughter’s well-being.

For the past 24 years, Ira Peskowitz has worked as a Palm Beach County Sheriff’s deputy.

Speaking about his daughter’s erratic and criminal behavior that would soon land her in court, Peskowitz said,

“That behavior is appalling.  And it’s appalling that anyone can think it is acceptable behavior.”

Not much has changed.  This time, however, he pins the blame person the girl’s mother and management team.

In a sixteen minute interview on The Domenick Nati Show, Peskowitz shared that he recently spoke with his daughter.  He shared intimate details about their troubled relationship before and after her rise to fame.

When he called Brelogi on her fourteenth birthday, a bodyguard (on the mother’s request) told Peskowitz and his nine-year old son,

“She calls me Daddy now, not you anymore.”

But why would a 14-year-old girl even have a bodyguard?  According to Peskowitz, it’s “all part of a show” staged by Bregoli’s management team.  Without a bodyguard, people wouldn’t recognize Bregoli as an artist.

Dismissing an earlier claim posted on TMZ that he no longer pays child support, Peskowitz said,

“For now, for the majority of the fourteen years, I’ve been paying close to $1,100 in child support.”

Frustrated about the payments, however, he added that Bregoli lives in Airbnb homes and has new jewelry.  Her mother also lives on disability, yet has managed to live an extravagant lifestyle with Bregoli prior to her rise to fame.  This led to her troubled childhood and erratic behavior, according to Peskowitz.

“There [are] pictures of [her mother] Barbara and her getting gold… with diamonds on it.  New Nike sneakers, you know, fancy dinners… What am I paying child support for?”

Despite his complaints, however, Peskowitz shared that he still worries about his daughter’s well-being.

When asked about whether he considered Bregoli a “troubled child,” Peskowitz confessed,

“Domenick, Danielle has been exposed to more things than any other child or human-being should ever be exposed to.”

He also shared that he doesn’t want his 14-year-old daughter hanging around Kodak Black, a “convicted felon.”  Kodak Black featured her in a music video last February, seemingly prompting her rise to fame.

“You give me one name of one father that… they want Kodak Black around.

“Kodak Black is a convicted felon… crimes against children, drugs, guns, and that’s who they [her management team] allow her to associate with?”

When asked about whether Bregoli has talent as an artist, Peskowitz shared intimate details about his daughter’s life.

According to him, in multiple music videos, people can see that she has never rapped before.  Her management team on the other hand, says Peskowitz, simply created a rapper without forming her artistic talent beforehand.

“How about this?  Do I think that Milli Vanilli was awesome?  You saw what happened to Milli Vanilli… I want to listen to the words before the music and the digital enhancement is done.

“I think her management team was able to set-up one piano lesson… they did it for a publicity stunt.”

Bregoli’s father also doesn’t think that her rise to fame is fair to talented artists in the music industry.

“So think about those millions of people who focus their whole entire life to get that opportunity that my daughter has gotten.  And the doors have been shut in their face.

“These are all good people…[They] are thriving for the opportunity for someone just to listen to their music or their instrument playing.”

He ended the interview asking fans not to trash his daughter on social media.   Peskowitz also requested that fans remain alert for pedophiles that may harass Bregoli.

You can check out the complete interview below.