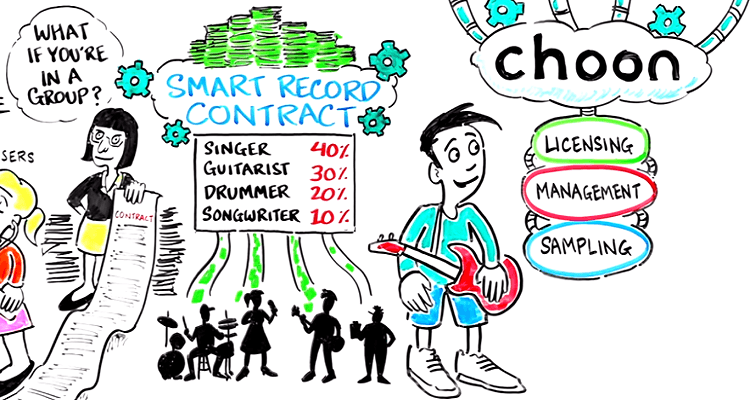 With his new start-up called Choon, Gareth Emery has promised artists 80% in streaming revenue payouts.  The payments will be in Ethereum, administered over blockchain.

British indie DJ and producer Gareth Emery has an idea.

Next year, Gareth Emery will launch a new music start-up.  Dubbed ‘Choon’ (British-speak for ‘a piece of popular music’), the publishing and distribution platform will focus on getting artists paid a whole lot more than other streaming platforms.

With the startup’s ecosystem based on the Ethereum blockchain, Emery has made an ambitious promise to independent artists.

Choon will return 80% of all streaming revenues to musicians on the platform.  By stark contrast, artists have little idea what percentage they receive on Spotify.

Way, way downstream is the major label artist, who gets a fraction of that.

“When it comes to getting paid fairly, artists get a worse deal today than ever.  Contrary to popular belief, there is money there, but it’s going to the wrong people.  We want to radically change the game.  Finally giving new and emerging artists a chance to get be fairly paid for their music, and making it far easier to create contracts for collaborations, management, samples and licensing.”

But, how will Emery manage to achieve his ambitious promise of higher payouts?  Simple.

On Choon, artists will have complete control over their content.  They’ll share their music directly to consumers.  Choon will use its own payment tokens dubbed NOTES, as well as ‘Smart Record Contracts.’  According to Emery, this would make ‘contracts permanent’ and ‘replace many of the procedures for licensing and contracting today.’

Fans can purchase music using NOTES.  The value will vary.  Emery told Billboard that the value will be “fluid and ultimately determined by supply and demand.”  He promised that at launch, users could purchase NOTES at five cents each.  He didn’t specify how much a track or an album would cost.

Choon will also use a music discovery process similar to SoundCloud and Spotify.  But don’t expect to find classic songs on the platform, Emery explained.

“We’re not interested in trying to stream The Beatles, or indeed any music that’s signed into the old legacy system of major labels and publishers.  These companies are just too difficult to deal with, and would likely force us into deals that would make it hard for us to pay smaller artists fairly.  So almost every artist on Choon will be on the newer side, or just happen to own the rights to their old music.”

Emery added that artists can’t upload songs “that sample major label artists.”  But they can sample songs from artists on the platform using “Smart Sample Contracts” with 50% remix profits.

(That could change in the future, thanks to a few startups aiming to calculate and compensate the considerable body of sampled content online.)

Emery remained confident in his ambitious promise of higher payouts to artists.

Yet, he also admitted that it will take time to develop a truly perfect publishing, distribution, and streaming platform.

“I’m not going to claim we’ll have everything perfect on day one, because we won’t.  A lot of the more advanced functions of the Choon ecosystem will likely take a few years to develop, but they will be worth it when we roll them out.”