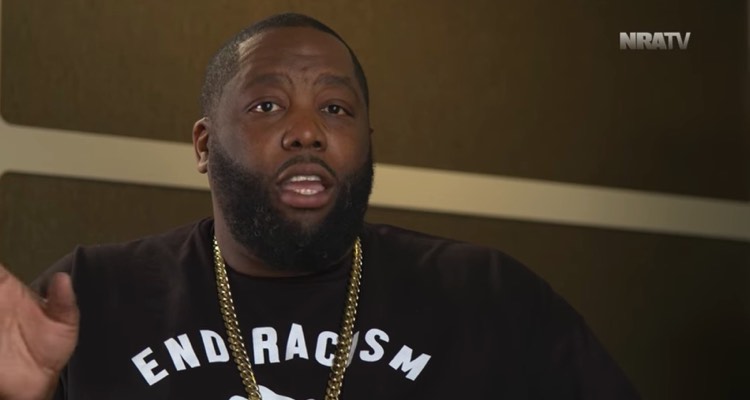 Michael Render —  aka Killer Mike — has always been highly vocal about his social and political views.  Render is used to being outspoken on controversial issues such as police brutality, inequality, and systemic racism.

Killer Mike, together with El-P, is behind the duo Run The Jewels.

In an interview with NRA TV, Killer Mike talked about defending gun ownership.  Not only that, he sharply criticized National Walkout Day, as well as anti-bullying campaigns.  The rapper, who stumped for Bernie Sanders in 2016, threatened to disown his children if they walked out of school to protest gun laws.

All lighthearted topics that will make you think about our bright, bright future.

But here’s where this got sticky.  The interview was aired while hundreds of thousands of people took to the streets last Saturday.  That was of course the date for March for Our Lives, a massive, nationwide series of coordinated demonstrations against current gun policies in America.

The result?  While endless coverage of the March was broadcast, Killer Mike was also broadcasting opinions like these:

Of course, a rapper with strong opinions is nothing new.  And Killer Mike undoubtedly has the right to them.  It’s just that his latest outspokenness may be affecting his career.

Recognizing the obvious damage, Killer Mike is now apologizing to his outraged fanbase.  He shared a pair of videos explaining that he actually supports the message behind March For Our Lives, and described it as a ‘noble campaign.’

He also pointed blame back at NRA TV, which actually recorded the interview one week before the March for Our Lives.  But, critically, aired it to coincide with the exact moment of the March.  Killer Mike says that was done intentionally, and obscured his broader message about African-American gun ownership.

He also apologized to the young people behind the movement.  According to him, he wasn’t aware that the NRA would use his interview to disparage the movement.

As a result, Render has drawn enemies on both sides of this debate.

The NRA is blasting the rapper for backing down, while anti-NRA protestors aren’t buying the apology.  Funny how that works.

All of which — once again — raises the question of whether musicians really benefit by standing up for political causes.  Or, if they simply end up dividing their audiences, or alienating them entirely.