The Most Popular Slang for Every Drug In the U.S. 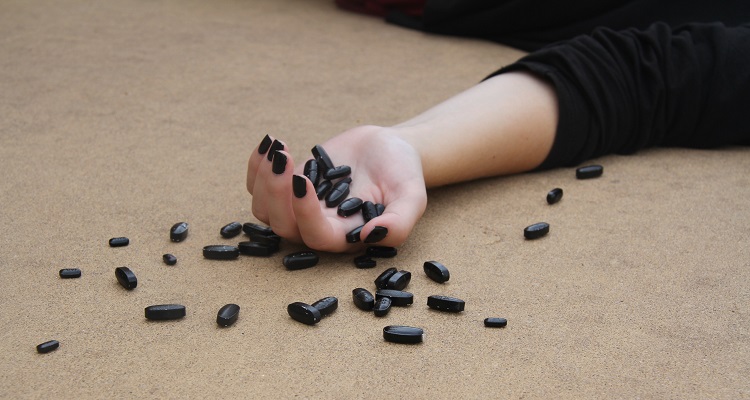 In an attempt to keep tabs on drug-related jargon across the US, the Drug Enforcement Administration (DEA) released an extensive report in 2017.  The report identified many of the known words and slang associated with commonly-used drugs.  This includes cocaine, MDMA, heroin, LSD, and Xanax, among others.

In 2016, over 10,000 Americans died from cocaine-related overdoses.  In a survey of over 1,150 Americans over known drug vernacular, Project Know asked what terms people attempt to use hide illegal substance use.

Addicts coined the phrase “Coca” to request the drug which, unsurprisingly, refers to the coca plant from South America.  People loved using the term in Texas, Utah, Colorado, Wisconsin, and New York.

In California, Oklahoma, Missouri, Illinois, and several Southern states, “Flake” emerged as the most popular and unique term.

“Yayo” also overtook “crack” as the most-used drug slang for cocaine in multiple states across the US.  You’ll likely hear the phrase at music festivals in Oregon, Nevada, New Mexico, Virginia, and in the New England region. 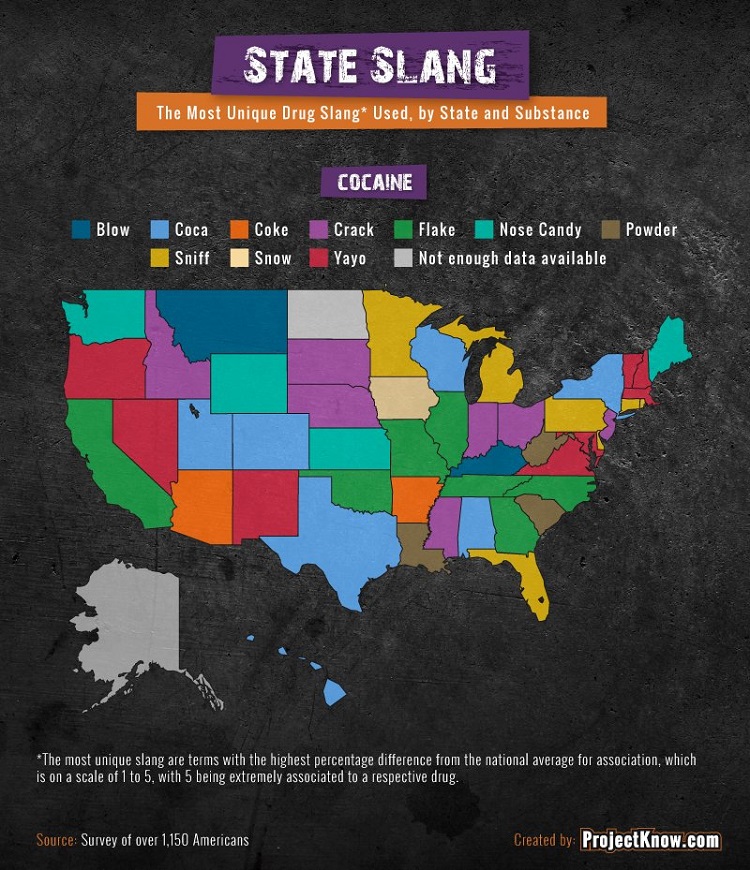 Smacking a boy with some brown dope.

Underscoring rising heroin use in the US, nearly 13,000 people died from heroin-related overdoses in 2015.

At music festivals and large-scale concerts, you’ll still find terms like “dope” and “smack” used to refer to the drug.  Yet, in states like Texas, Colorado, and New Mexico, addicts and users have coined the term “brown.”  Of course, this refers to heroin’s color and physical state, often turning black, white, or brown.

“Skag” also rose in popularity, becoming the most popular and unique slang used in Arizona, Montana, Illinois, New York, Alabama, North Carolina, and the New England region.  “Boy” remains a popular term for the drug in the Midwest and the South. 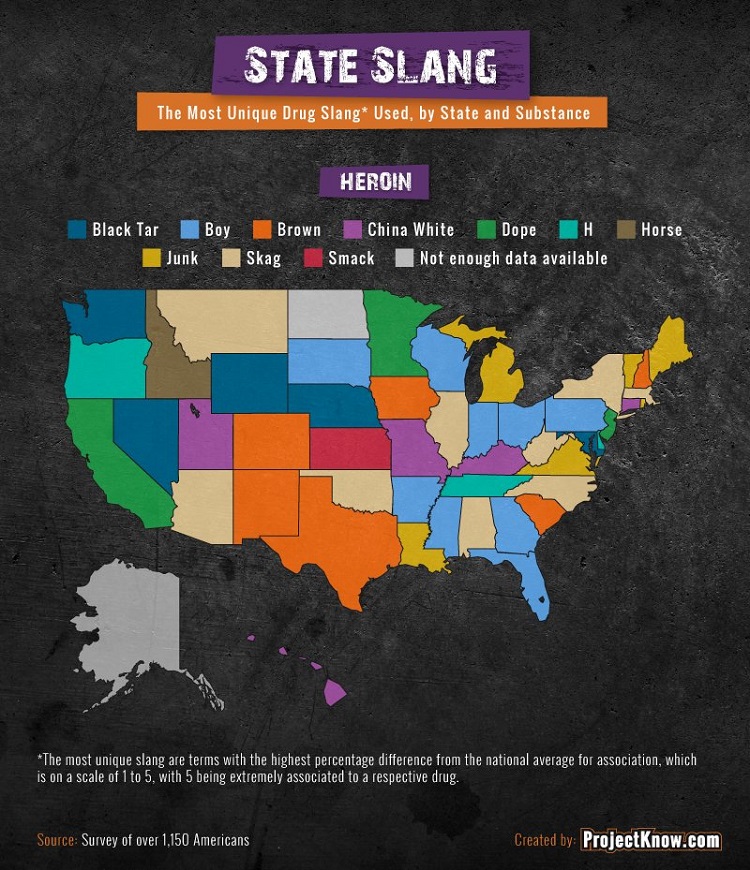 Lucy in the Sky with Diamonds…and blotter acid.

While it remains a popular party drug, modern LSD usage now comes with greater psychological risks.  Users have reported suffering from anxiety, panic attacks, and paranoia, as well as physical side effects.

The term “Lucy” remains popular in Texas and California.  Yet, a new term has recently emerged.  In the Midwest, drug users now refer to the substance as “blotter acid.”  LSD users in Arizona, Florida, and several other states in the Midwest, coined the simple term “L.”  You’ll likely hear the word “Alice” at music festivals in Montana, Minnesota, Iowa, and Nebraska. 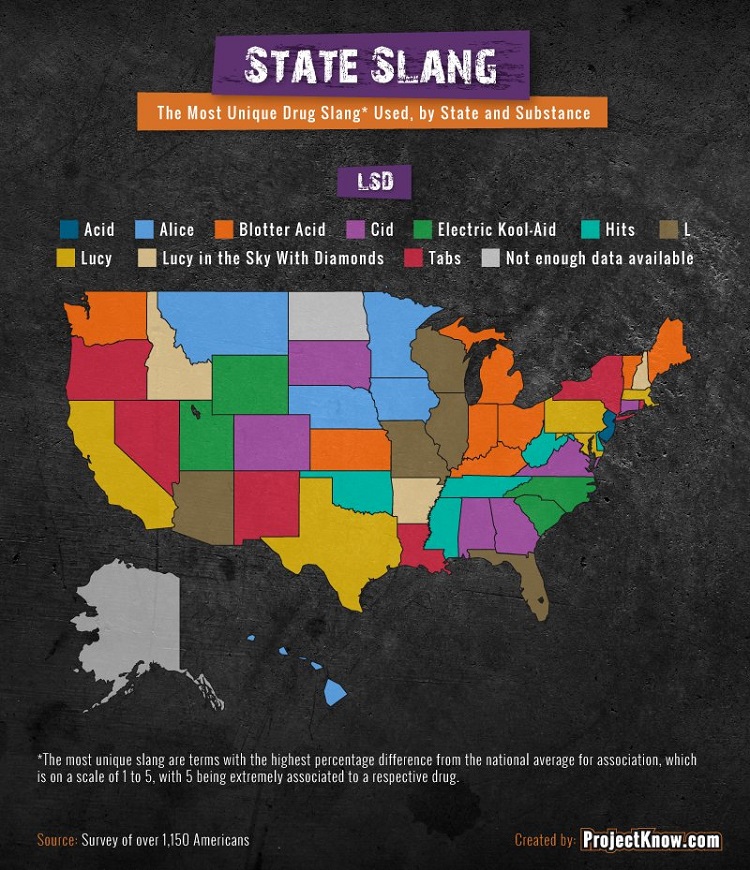 Too dope to change.

Drug users have coined many words to marijuana over the years.  As of 2017, 29 states, including Washington D.C., have passed laws legalizing marijuana.  In seven states, people can now smoke marijuana recreationally.

“Dope” remained the most common term in the United States for marijuana.  Yet, “Ganja” has emerged as the second-most popular word for the drug.  You’ll probably hear this term at concerts in Washington, Idaho, Colorado, New Mexico, and a handful of states in New England. 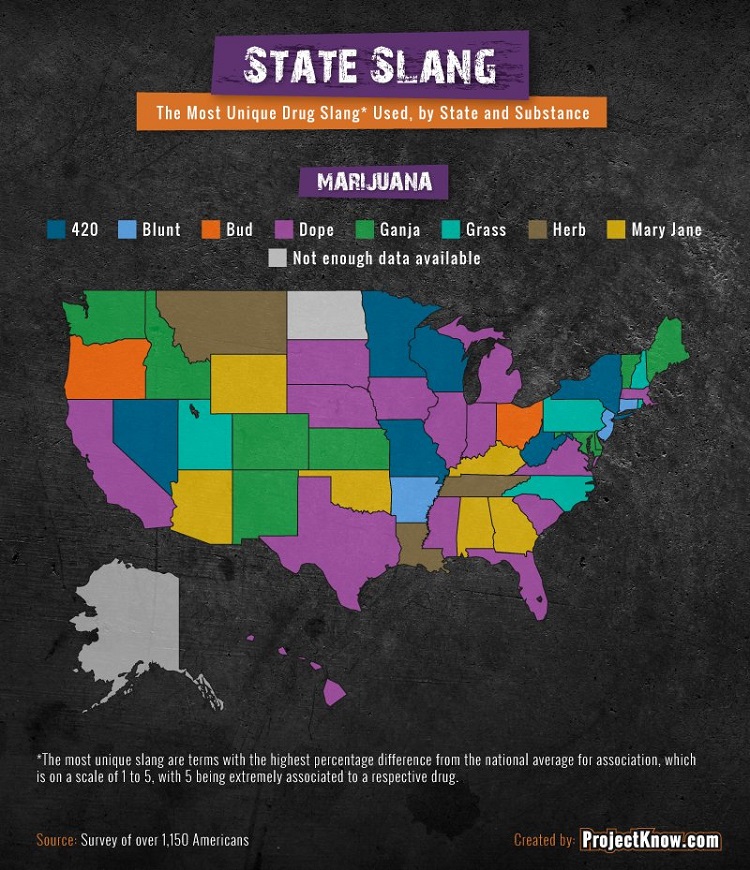 Over the years, musicians across the industry have created a ton of songs about MDMA with the phrase “Molly.”  Miley Cyrus and Kanye West, for example, have sung about popping a ‘Molly.’  Yet, modern MDMA substances have only grown stronger.  Researchers have found that two years of heavy “Molly” usage may produce decreased cognitive function.  Users may also likely suffer from sleep disturbance, a lack of appetite, and depression.

So, how do people hide their MDMA usage?  Simple.  With the term “vitamin E,” used mainly in seven states, including Arizona, Utah, and Washington.  “Happy Pill” and “Roll” remains popular and unique terms in the South and Midwest.  Festivalgoers will likely hear the word “Molly” in only 2 states: Wyoming and New Jersey. 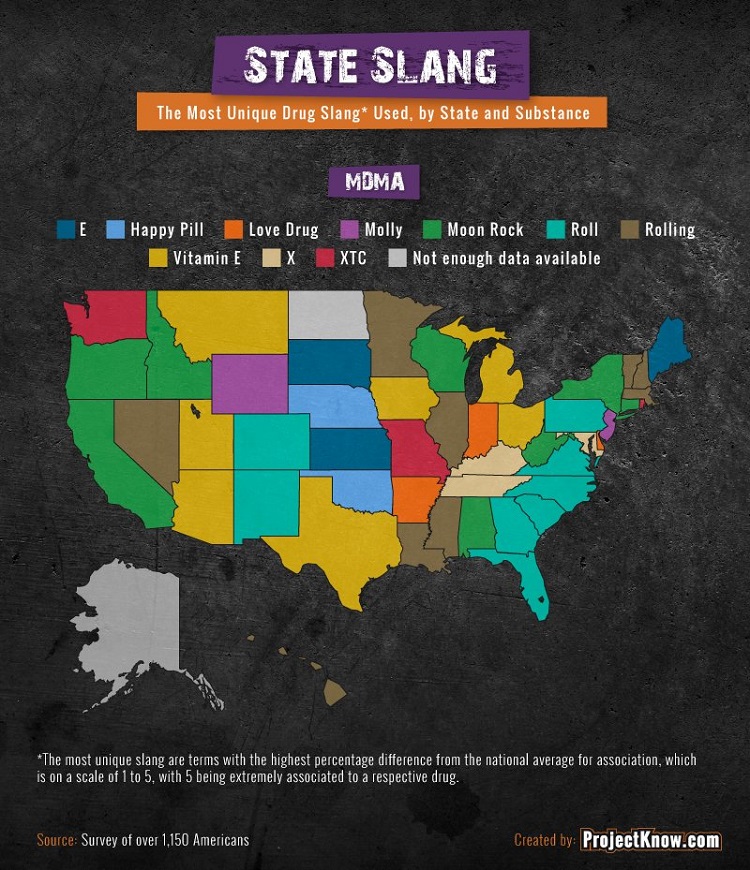 Between 2010 and 2014, the number of fatal methamphetamine overdoses doubled across the United States.  According to research, people who overdosed on the drug hadn’t used other illegal substances.

In California, Las Vegas, Idaho, and Wyoming, “tweak” emerged as the most popular and unique way to refer to methamphetamine.  The term “shards” remains popular in the West, including Washington, and Oregon, as well as in Texas. 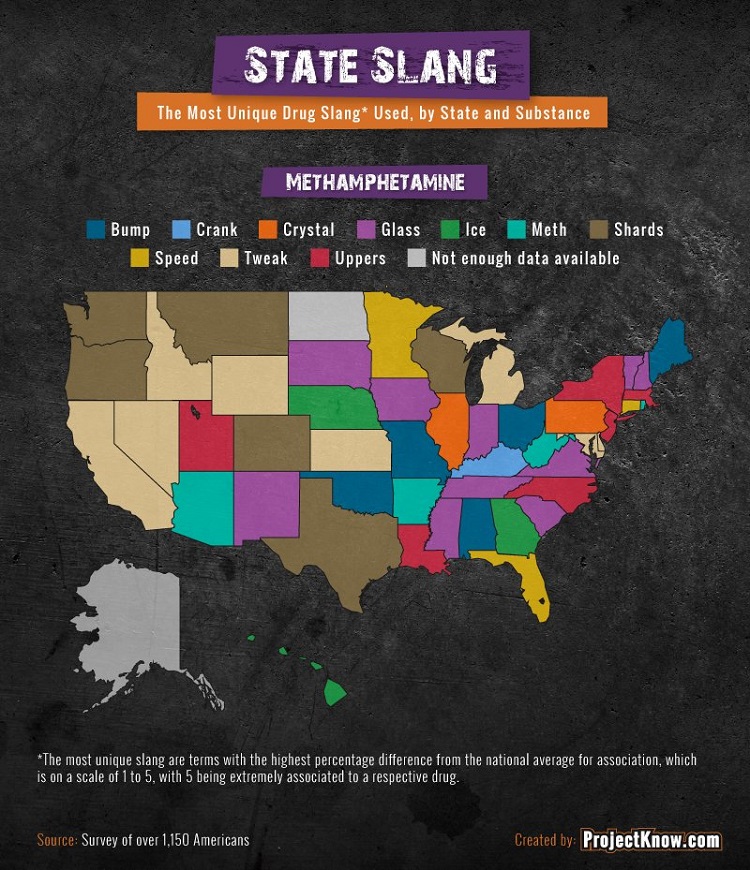 Xanax has emerged as the ninth best-selling drug in the US as well as the fifth most prescribed.  Yet, 125,000 people end up in the ER each year due to complications related to Xanax use.

Due to its small, green, and bulky design, the term “Hulk” has emerged as the most used term used to describe the drug.  Across the South, people coined the code name “Footballs,” followed by “School Bus,” “Zanbars,” and “Ladders” in other regions. 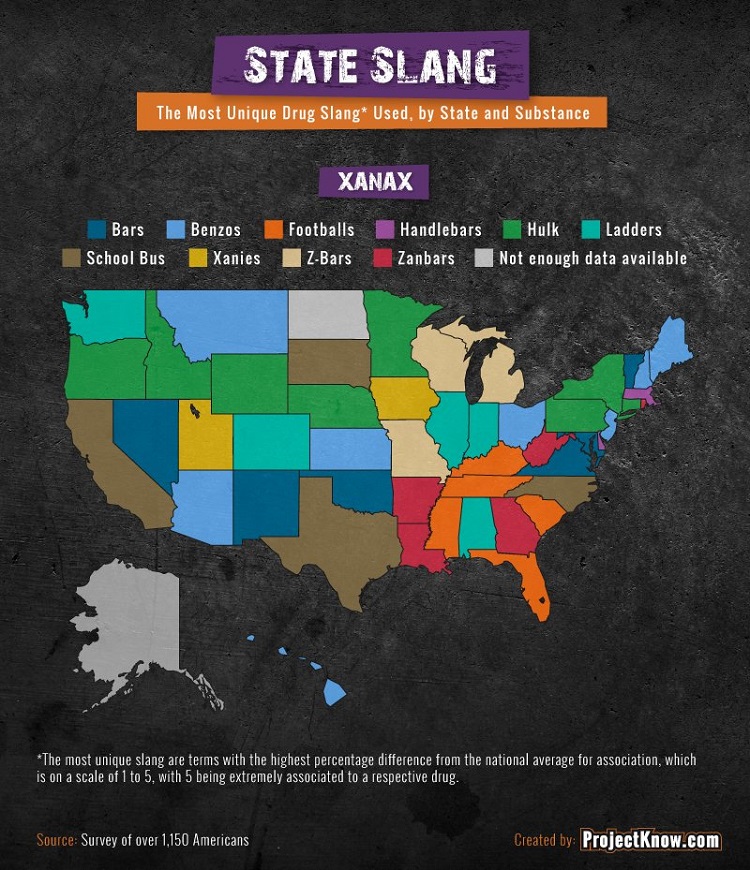 For those who don’t consider themselves cool, “Nose Candy,” “Horse,” “Electric Kool-Aid,” “Grass,” “XTC,” “Meth,” and “Benzos” emerged as the most recognized phrases.  Under the ‘moderate to the extremely cool’ audience, “Yayo,” “Boy,” “Tabs,” “Ganja,” “Roll,” “Bump,” and “Handlebars” were the most used.

Blame your friends and family.  Oh, and also the internet…and the drug itself?

So, how do most Americans pick up obscure drug terminology?  81% claimed that they learned it from their friends.  70% said from the internet, 46.1% at school, 31.3% cited using the actual drug, and 23.3% pinned the blame on the family. 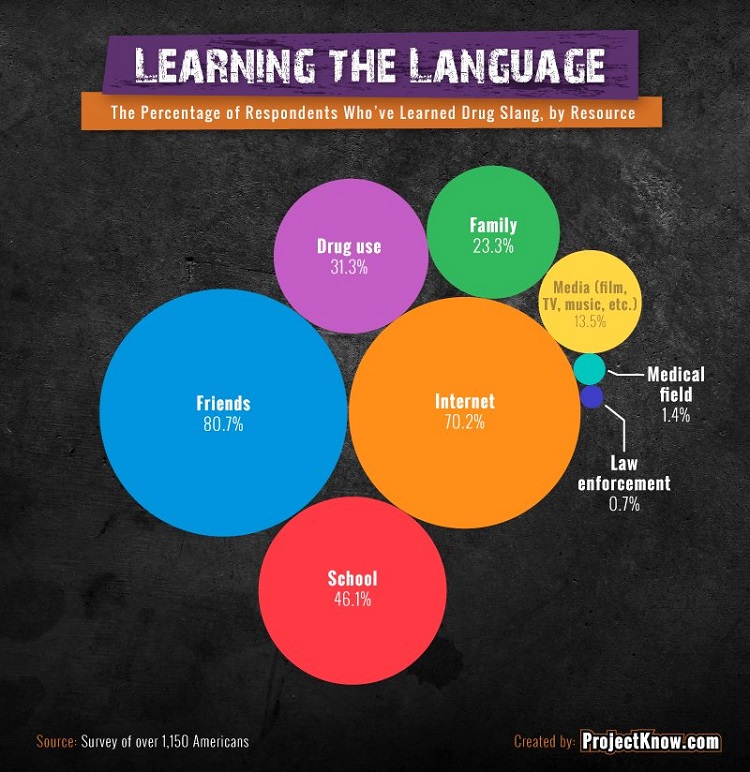 With the 2018 concert season about to start, Digital Music News uncovered the most popular ecstasy pills in the world.  Last month, we covered the effects and prevalence of the “Blue Superman,” the “Green Apple,” and even the highly-toxic “White Mercedes.”  Today, we’ll take a look at exactly how people, especially festivalgoers, attempt to hide drug usage with curious and unique language.

For more information on this study, you can check out ProjectKnow here.