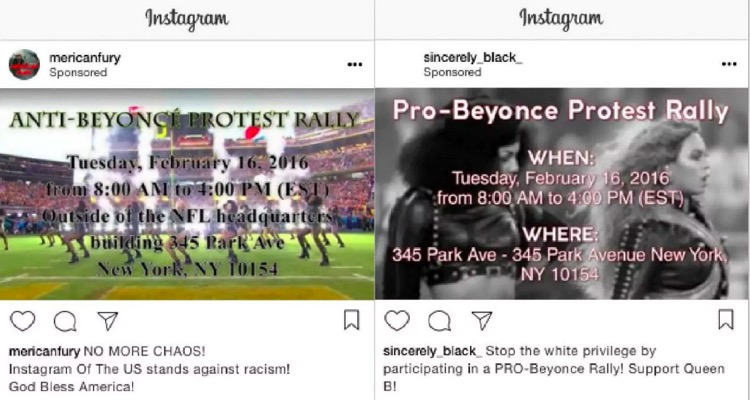 These ads were purchased by the same Russian-backed operatives.

Russian operatives used than 3,500 Facebook Ads in a massive disinformation campaign.  Those include ads targeted at Beyonce fans — and haters.

We’re all familiar with how Russians operatives used Facebook to manipulate public opinion during the 2016 elections.  But now we’re starting to see this ugly animal’s fangs.

And, intelligence for exploiting controversial public figures.  Like Beyonce.

Earlier this week, Democrats on the House Intelligence Committee revealed more than 3,500 Facebook ads purchased by Russians between mid-2015 and mid-2017.  These ads were used to spread disinformation on issues ranging from immigration to gun control.

The disclosure demonstrated the sheer magnitude to which Kremlin-directed forces used Facebook to create social, cultural and political unrest.  With razor-like precision, Russian operatives were able to use the platform’s targeting tools to deliver fake information to highly-specific targets.

+ Spotify May Face Legal Action Over a Simple Russian Hack

The Internet Research Agency (IRA), a Russian company also known as the ‘Russian Troll Farm,’ ruthlessly targeted any excitable group.   That includes those that might react to something about Beyonce.

In a 2016 Instagram post, the group targeted people believed to be police officers, firefighters, and military officers, urging them to appear at a protest of Beyonce outside of NFL headquarters.  Simultaneously, in another account, the same group was targeting black users and directing viewers to a pro-Beyoncé protest at the same location.

Although nothing happened, the effort demonstrated just how far IRA would go to create and manipulate issues and situations.

The disclosure raises serious questions about what level of disinformation is currently permeating Facebook.  And, what can be done about it — if anything.

“The only way we can begin to inoculate ourselves against a future attack is to see first-hand the types of messages, themes, and imagery the Russians used to divide us.  We would like to be able to show the country the full [breadth] of what the Russians were doing on social media to influence the American electorate, so we’re continuing to work with Facebook.”

Facebook in a statement said that: “This will never be a solved problem because we’re up against determined, creative and well-funded adversaries. But we are making steady progress.”