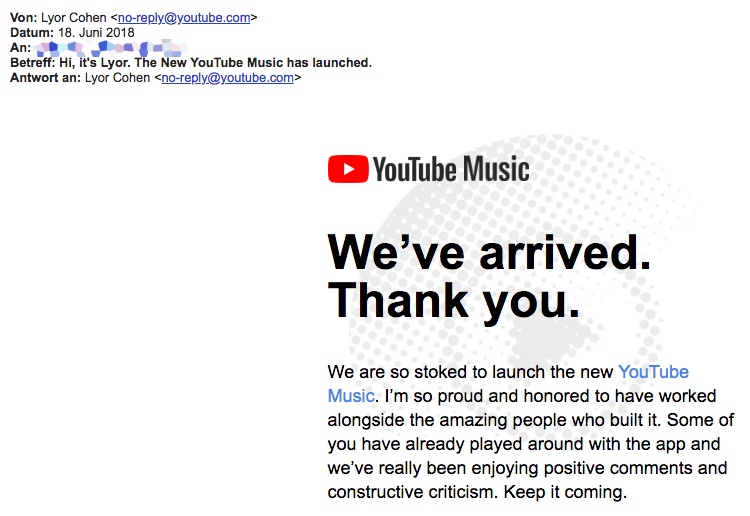 YouTube Music chief Lyor Cohen is blasting email alerts to users in 12 more countries.  That brings YouTube Music’s rollout to 17 countries worldwide, though not everyone is playing along.

After a stalled start, YouTube Music is finally getting rolling.  The initial launch now includes 12 more countries, for a total of 17.

Earlier, YouTube Music announced an initial launch in the U.S., Australia, New Zealand, Mexico and South Korea.  That was back in mid-May (here’s our complete coverage).

That brings the total to 17 nations, though not everyone has access.  One user in Russia shared a ‘Coming Soon’ screen, despite the announced expansion.  We’re not sure if other countries are experiencing similar issues, though YouTube Music was displaying a ‘Coming Soon’ placeholder for roughly three weeks after its splashy announcement in America.

Even more problematic: YouTube started unleashing a major advertising campaign, with users rushing to a nonexistent app.  Strangely, those issues seem to be continuing, despite the aggressive announcements this morning.

But the bigger problem may involve bigger superstars, including Beyonce and Jay-Z.

Just this weekend, music’s power-couple — Beyonce & Jay-Z aka ‘The Carters’ — released a surprise album on Tidal.  Initially, the release, titled, Everything Is Love, appeared to be a Tidal-only exclusive.  By Monday morning, however, the album was on Spotify Premium, Amazon Music, Deezer, and Apple Music.

But not YouTube Music.  A quick search of ‘The Carters’ returns nothing remotely related to Beyonce & Jay-Z.  Similarly, a query for ‘Everything Is Love’ only returns similarly-titled albums from lesser-known artists (guess it’s a popular catch-phrase for albums).

Other gaps are also noticeable.  Beyonce’s Lemonade isn’t licensed to YouTube Music, though in classic YouTube form, a video playlist titled ‘Lemonade’ is available.  The artwork is clearly a generic image, and the playlist looks like a good target for removal.  It’s definitely not from Beyonce, her label, or her representatives.

Those scenarios are routine on mainline YouTube, though hopefully YouTube Music is doing something about it.  Otherwise, missing videos and tracks will become a major sticking point for users — especially those used to more reliable collections on Spotify and Apple Music.  All forgivable issues in the past, but less permissible once people are paying for the privilege.

Outside of Everything, Jay-Z tracks and videos are on YouTube Music, but the rapper has clearly withheld licensing for his most powerful albums.

Actually, older Beyonce albums are available.  But Jay-Z appears to have assumed a harsher stance towards the video platform.

Taylor Swift fans, however, may be delightfully surprised.  Not only is reputation available on YouTube Music, but so are older albums like 1989 and Red.

And what about that Google Play Music integration?