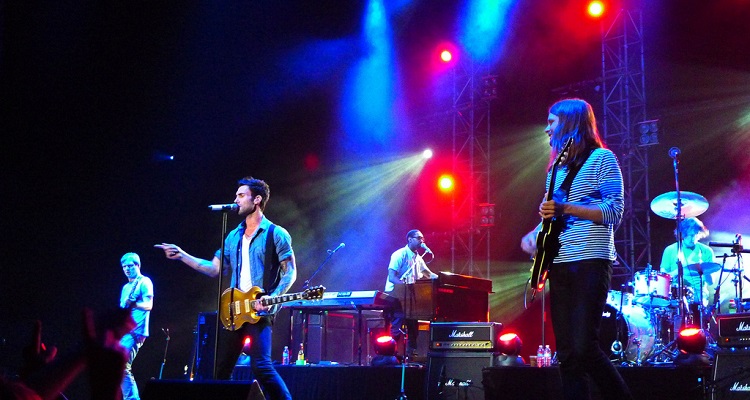 Thanks partly to Amy Schumer, a Change.org petition has called on Maroon 5 to renounce its still-unconfirmed Super Bowl LIII halftime performance.

Several weeks ago, Rihanna declined an invitation to play at the upcoming NFL Super Bowl LIII in Atlanta, Georgia.

She reportedly rebuffed the offer to show support for beleaguered former San Francisco 49ers quarterback, Colin Kaepernick.  The controversial quarterback has sued the NFL and its owners, claiming they blocked his reentry into the league.

Amy Schumer, not currently involved in any promotional activity for the league or Super Bowl, shared her opinion.  The comedian sharply criticized white NFL players who haven’t kneeled, declaring them insensitive to racial injustices.

“I wonder why more white players aren’t kneeling.  Once you witness the truly deep inequality and endless racism people of color face in our country, not to mention the police brutality and murders.”

Then, pushing for a wider boycott of the event, Schumer urged Maroon 5 to back out of the group’s upcoming performance.

“I think it would be cool if @maroon5 backed out of the Super Bowl like @badgirlriri did.  I personally told my reps I won’t do a Super Bowl commercial this year.”

So far, the controversial comedian has not been asked to participate in a Super Bowl commercial or event.  That invited some jeers that Schumer was rejecting the NFL before they could reject her — though regardless, we definitely won’t be seeing Schumer in a Super Bowl spot next year.

But according to multiple reports, Maroon 5 will perform at the Super Bowl halftime show.

Yet, one key problem exists – the group has yet to formally confirm the invitation.  Still, the call for Maroon 5 to boycott the NFL has sparked immense interest in social media.  Now, thousands of users have taken to the internet to voice their opinion.

A Change.org petition has begged the group to openly refuse to perform at the Super Bowl.

“Until the league changes their policy and support players’ constitutional right to protest, no artists should agree to work with the NFL.”

At present, nearly 50,000 people have signed the petition.  The Change.org page continues,

“The band has a chance to stand on the right side of history.  If they don’t, they will be remembered for choosing to side with the NFL over its players.”

“If the band can take a stand for LGBT rights, they should do the same for these players.”

Praising Kaepernick for “sacrificing his NFL career to call out violent racism,” the post ends,

“Sign to tell Maroon 5 to drop out of the Super Bowl halftime show in solidarity with Kaepernick and players who #TakeAKnee.”

You can view the petition here.