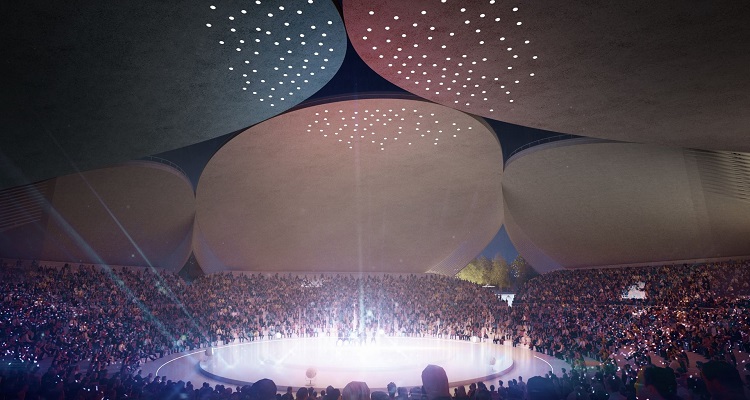 A rendering of AEG and CJ LiveCity’s Seoul Metropolitan Arena.

AEG has confirmed a new deal.

The global live entertainment giant has partnered with CJ LiveCity Corporation to jointly build the Seoul Metropolitan Arena, a 20,000-capacity arena in Seoul’s Goyang City in the Gyeonggi Province in Korea.

CJ LiveCity will include the Seoul Metropolitan Arena as well as a studio complex, a K-culture themed entertainment district, and a waterfront park.  Both companies hope the new metropolitan arena will become a landmark tourist destination.  A future landmark, both write, would revitalize the national economy as well as the economy of the northern Gyeonggi Province.

The selected site has proximity to five of Korea’s largest cities, which have a combined population of more than 150 million people. The site, slated to open in 2023, also remains close to the upcoming GTX highspeed express train, connecting CJ LiveCity to the Gangnam District.  It will also be a 40-minute drive from Seoul’s Incheon International Airport.  The Gimpo International Airport is a closer 20-minute drive.

Both companies hope the new site – described as Korea’s “first world-class arena” – will also serve as the region’s largest and ‘most advanced’ live performance venue for K-Pop, international artist tours, sports events, and Hallyu (New Korean Wave) content.  The arena will offer both an indoor and outdoor experience.

The agreement marks AEG’s official entrance into the Korean live entertainment market while expanding the company’s footprint in Asia.

“CJ has an in-depth understanding of the Korean and Asian markets and unparalleled experience in entertainment.  We believe that the Seoul Metropolitan Arena will become a must-play destination for world tours and look forward to breaking new ground together.”

“The collaboration with AEG, which is one of the world’s leading venue operators and global live music companies, will be one of the most important factors for the arena’s success.”