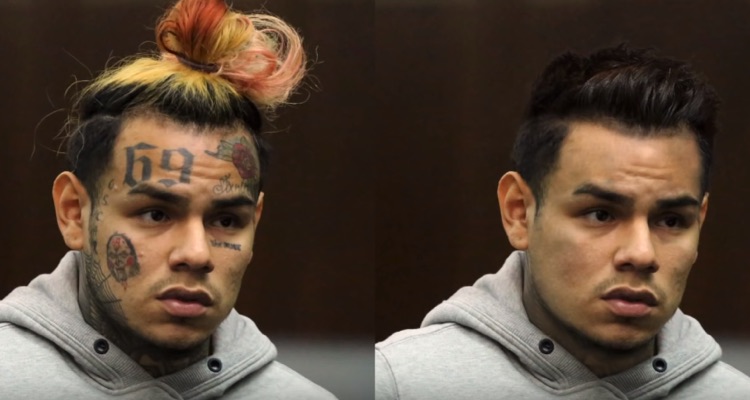 A Photoshopped look at Tekashi 6ix9ine without his famous face tattoos; the rapper will not enter the Witness Protection Program.

According to U.S. Government law enforcement officials, the program is available to Tekashi 6ix9ine, whose real name is David Hernandez.  But the rapper has now opted not to enter the program, which is entirely voluntary, according to one attorney with knowledge of the rapper’s case.

The source emphasized that the decision is not yet final, and could change once Hernandez reconsiders matters inside prison. 6ix9ine is only expected to serve a minimal sentence in exchange for his testimony.

Over the course of the past two weeks, federal court testimony by Hernandez has greatly aided the FBI, DEA, and local law enforcement officials to build convictions against various gang members and associated figures. That includes notorious members of the Nine Trey Bloods gang, based in New York, once staunch allies of the rapper.

That gang is undoubtedly targeting Tekashi 6ix9ine following his testimony, as well as the rapper’s family members. The threats will begin during the expected prison term, which Hernandez is expected to serve shortly after his courtroom hearings end. The rapper is expected to receive protective treatment on the inside, though the U.S. prison system is notorious for intentional breaches and security lapses by prison officials, often in exchange for bribes or to settle personal grudges.

Tekashi 6ix9ine was facing an estimated prison term of 50 years for racketeering, firearm possession, drug trafficking, and conspiracy to commit murder. His testimony was negotiated in exchange for a much lighter sentence, as well as options that included Witness Protection. It’s unclear what level of protection Hernandez has negotiated for his prison term, though it’s likely that federal law enforcement officials will work to protect their star witness from other inmates — if only to encourage others to feel safe sharing sensitive details on alleged crimes.