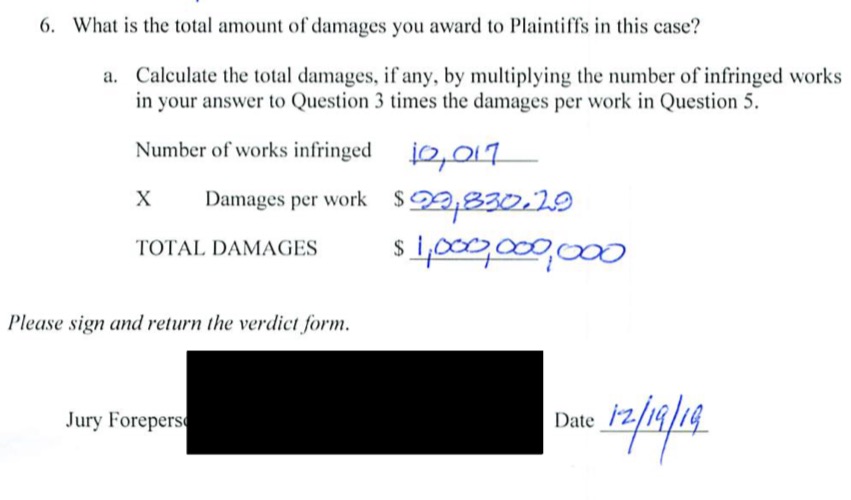 Question 6 of the jury verdict form in Sony et. al v. Cox Communications, filed Thursday (12/19) in the U.S. District Court for the Eastern District of Virginia.

Mega-ISP Cox Communications has now been slapped with a monstrous, $1 billion fine for massive copyright infringement of both publishing and recorded music copyrights.

The jury decision, handed down just hours ago, pretty much threw the book at Cox Communications.  The ISP has been battling major label groups and other music rights owners for years over allegations of massive music copyright infringement.

Among the long list of plaintiffs are Sony Music Entertainment, Universal Music Group, and Warner Bros. Records, with the Recording Industry Association of America (RIAA) corralling the litigants.  That group first filed against Cox last year (you can find the full, initial complaint here).  But despite continued defense efforts by Cox, the jury found the ISP guilty of both vicarious and contributory infringement on more than 10,000 works.

The completed jury form, shared with Digital Music News this afternoon, can be found here.

The result comes years after litigation against Cox by BMG Rights Management.  That contentious suit eventually resulted in a $25 million verdict against Cox, though the ISP managed to reverse the ruling on appeal. Ultimately, the parties settled, though the battle was just the beginning of a major war for Cox.

In both cases, Cox has been assailed for failing to clamp down on infringement by subscribers.  Instead of penalizing infringing users, Cox oftentimes ignored bad behavior, or simply reinstated accounts after a modest suspension.  In total, the major label groups accused Cox of harboring and protecting more than 20,000 repeat infringers.

These days, illegal downloading has given way to legitimate streaming, with the latest data demonstrating an extreme drop in pirated music content. Of course, piracy still exists, though the heyday of illegal P2P file-sharing is long over. In fact, it’s questionable whether decades of hardline enforcement and litigation by the RIAA, IFPI, and major labels ultimately reduced download piracy, or whether surging streaming platforms like Spotify, YouTube, and SoundCloud are largely responsible for the declines.

So what happens next?  Major labels and publishers should probably keep the bubbly corked — at least for now.  After multiple years of warfare, we’re expected Cox to appeal this monstrous ruling, with an eye towards scoring another reversal.