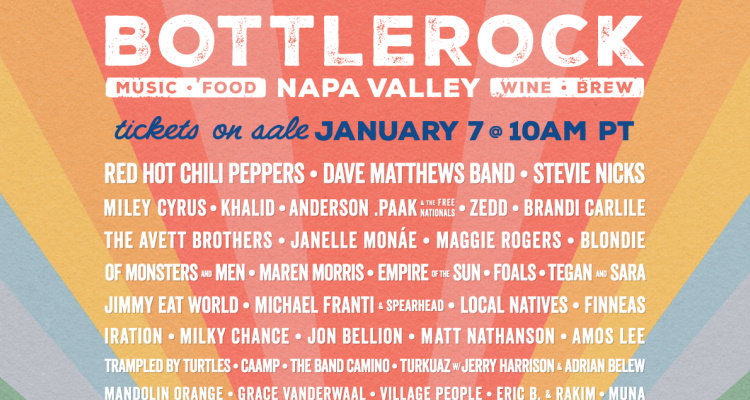 BottleRock Napa Valley has revealed the line-up for its 2020 show. It’s the seventh anniversary of the festival, with more than 75 acts appearing.

Official headliners for the show include The Red Hot Chili Peppers, Dave Matthews Band, and Stevie Nicks. Other artists who will appear this year include Khalid, Anderson Paak, Janelle Monae, Maggie Rogers, and Miley Cyrus.

Cyrus’ appearance at BottleRock Napa Valley will be her first live performance of 2020. The mix of artists across multiple genres is designed to appeal to a combination of music fans. BottleRock festival ticket sales will start on January 7. Three days pass sales start Tuesday at 10 am PST. The general admission ticket cost is $359.

A VIP pass that includes access to the VIP Village starts at $849. A Skydeck Pass offering elevated viewing platforms is also available for $1599. Finally, a platinum pass with on-stage or front-row seats starts at $4350.

The official festival website says BottleRock will also feature a culinary stage. Celebrity chefs will cook alongside musicians and entertainers for “culinary-infused antics.” The festival will also have several Napa Valley wines to sample.

BottleRock appears to be embracing a line-up to appeal to a broader mix of musical tastes. Coachella’s recent musical line-up has trended increasingly younger in favor of pop, hip-hop, and EDM over rock. BottleRock is a place where generational gaps can collide.