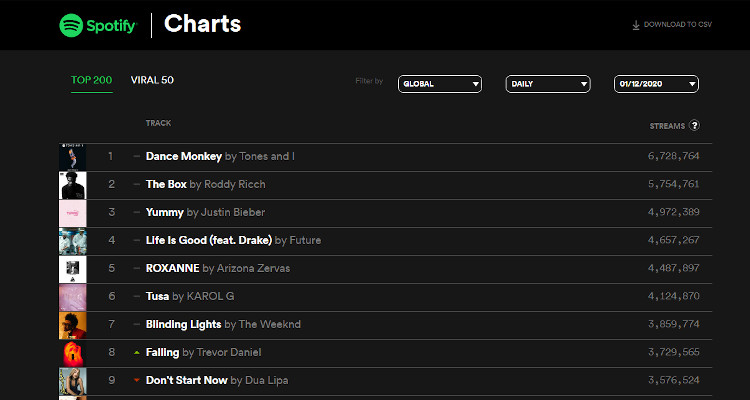 Photo of Spotify Charts showcasing the ascent of “Yummy” by Justin Bieber.

The controversial attempts of singer Justin Bieber and/or his team to game the charts and make “Yummy” a No. 1 song seem to be coming up a little short.

For the moment, Bieber’s fans have been unable to bring his new song to the top of the charts. Some are speculating that the reason might have to do with Spotify removing what it considered fake plays from its charts. Another possibility may be that Bieber’s fans just didn’t care enough to game the system or felt that it was perhaps improper to do so.

On the weekly charts, “Yummy” is doing better.

The rapid ascent of “Yummy” is also on display at Billboard. It debuted on the Hot 100 chart at No. 2. This was after its first full week of tracking. The song was released on January 3rd.

According to Billboard, 71,000 digital copies of the song were sold during the week, which they say was the most since Taylor Swift’s “You Need to Calm Down” sold 79,000 copies in June of last year. This made “Yummy” the No. 1 song in terms of sales. It was further No. 2 in terms of streams, with 29.3 million in total across all platforms.

The song is Bieber’s 17th Top 10 hit song. Keeping him from the overall top spot was Roddy Ricch’s “The Box,” which was the first No. 1 song for the rapper.