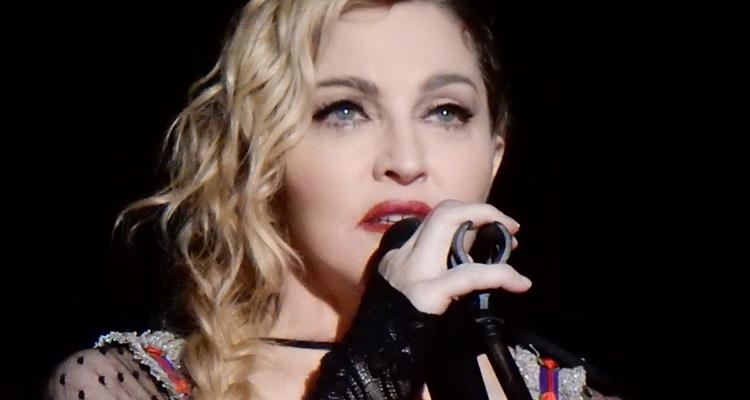 Madonna canceled her London shows via social media per her doctor’s orders. She is undergoing six hours of rehab per day.

The 61-year-old singer took to social media to share the news with her fans in a lengthy statement. “As you all know, I have multiple injuries and have had to cancel shows to give myself time to recover,” an Instagram post reads.

“So as not to surprise you, I want to let you know ahead of time that I will be canceling two shows — February 4 and February 11 at the Palladium in London,” she follows up.

She admitted that doing three consecutive shows may be too much for her to handle. Doctors asked her to take at least a day off of performing after each show. 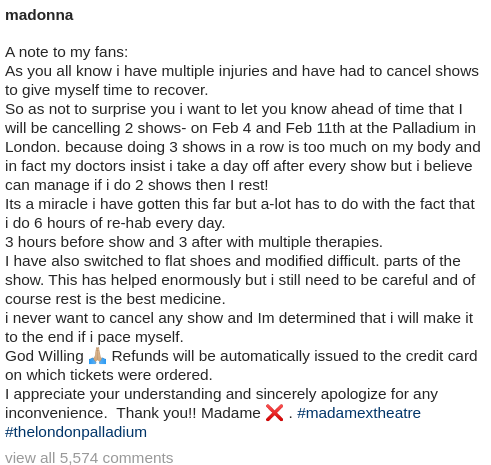 “It’s a miracle I have gotten this far,” she continues on Instagram. She attributes the longevity of the tour due to undergoing six hours of rehab every day. Three hours before showtime and then three after that includes multiple therapies.

Madonna says she has made multiple adjustments to her performance to make them easier on her. She has switched to flat shoes instead of heels and modified her performances to remove more difficult parts. She says those modifications have helped her ‘enormously,’ but she still needs to be careful.

Later in the post, she apologizes to fans, saying she never wants to cancel her shows. The news comes after Madonna announced she is struggling to keep up with her tour schedule. Madonna canceled her first of the London shows on January 26th, but it’s not the only date removed from the schedule.

Madonna’s tour was slated for a 14-night run at the Palladium in London over the next three weeks. Her Madame X Tour is a celebration of her most recent album, which she dropped after living reclusively in Lisbon.