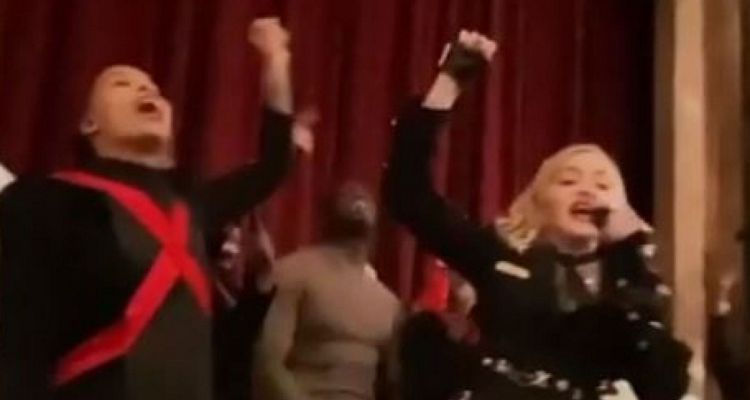 Madonna says the London Palladium dropped the stage curtain in the middle of her performance.

In a post titled, “Artists Are Here to Disturb the Peace,” the 61-year-old singer let her opinion fly. Madonna writes, “It was 5 minutes past our 11:00 curfew, we had one more song to do, and The Palladium decided to censor us by pulling down the metal fire curtain that weighs nine tonnes.

Accompanying the post on Instagram is a video of Madonna behind the iron curtain. She’s swearing, and the crowd is chanting for more. Madonna later emerges from behind the curtain with her backing dancers for her final number, “I Rise.” She finished the song with the help of the audience and signed off by shouting, “Power to the People.”

The house lights came on, and the microphone no longer worked – yet Madonna continued on.

The London Palladium issued a statement today about the allegations. It says, “Contrary to several reports, at no point during last night’s performance did staff pull down, or attempt to pull down, the Iron Fire Curtain.”

At another show at the Palladium, Madonna told crowds the iron curtain would fall if the show ran long. The news drew both criticism and support on social media. Some users supported the theater’s position saying, “This should have been done in the States. You need to learn not to be super tardy.”

Madonna’s ‘Madame X’ tour seems to be churning out disaster after disaster. She has already canceled ten tours out of the 93 advertised due to “multiple injuries.”

In another Instagram post, the singer admitted she was going through six-hours of rehab a day to stay in performing shape. Those injuries have forced her to scale down her performances and give herself a day of recovery between each performance.

The ‘Madame X‘ tour is scheduled to be at the London Palladium until the middle of February.