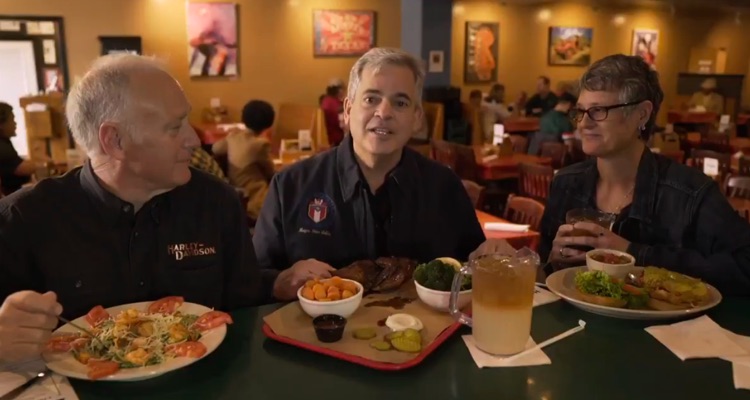 An earlier version of this story misidentified Texas State Senator Kirk Watson as Senator John Cornyn, who represents Texas in the U.S. Senate. The text has been updated to reflect the correction.

One week after cancelling SXSW 2020, which was expected to deliver several hundred million dollars to the local economy, Austin Mayor Jerry Adler is encouraging residents to patronize restaurants and other businesses.

Mayor Adler, Texas State Senator Kirk Watson, and Judge Sarah Eckhardt (who recently resigned to run for a state senate seat) appeared in a video message, which was captured inside an unidentified Austin restaurant. Mayor Adler indicated that those “hurting” because of SXSW’s cancellation can be aided by the public’s “going to restaurants, going to clubs, buying musicians’ merchandise, [and] helping one another.”

Judge Eckhardt spoke next, stating that “it’s still safe and a wonderful thing to stand with Austin, to eat with Austin, to take rideshares with Austin, and to go see local bands with Austin.” Senator Watson commented last, further encouraging residents to have fun, support local businesses, and donate to the “Stand with Austin Fund.” Finally, the three concluded the clip by indulging in a shot.

On Twitter, the effort to keep Austinites out and about didn’t sit well with everyone.

One user voiced his frustration that SXSW had been cancelled and wrote: “You [Mayor Adler] crushed a lot of businesses. It will be remembered on Election Day.” Another individual struck a tone of disbelief, emphasizing that Mayor Adler cancelled SXSW due to COVID-19 concerns, only to double back and claim that there’s actually very little danger to the public. This message closed with a clear-cut statement: “You’re not making much sense, Mayor Adler.”

These and other instances of frustration are understandable. SXSW is immensely popular, ticketholders have been unable to receive refunds, and some who reserved Airbnb residences in Austin are finding themselves between a rock and a hard place.

Even so, Mayor Adler’s decision to pull the plug on SXSW has hardly proven unprecedented. 2019’s mega-festival attracted somewhere in the ballpark of 415,000 people. With the COVID-19 pandemic raging on, California has encouraged the cancellation of events featuring more than 250 guests, and Ohio has done the same for outings that would be attended by 100 or more individuals. Mayor Adler has prohibited gatherings of more than 2,500 people.

And in a testament to the degree of public fear sweeping the United States and the world, Live Nation has taken the unprecedented step of indefinitely postponing all upcoming concerts.

To date, 16 Texans and approximately 1,400 Americans have been diagnosed with COVID-19.