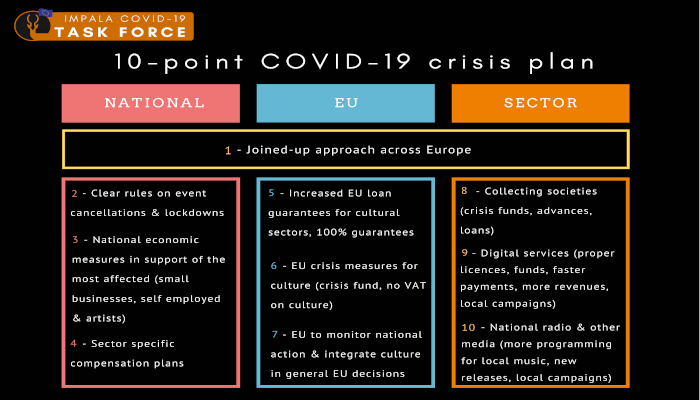 The Independent Music Companies Association (IMPALA) has created a 10-point COVID-19 crisis-management plan, which features relief-minded recommendations for governments, the European Union, and the independent music industry itself.

The promptly-issued response strategy comes less than one week after IMPALA officially formed its COVID-19 Task Force. The first of the guide’s ten steps calls for a “Joined-up approach across Europe”; IMPALA Executive Chair Helen Smith previously signaled that the lack of coordination among European governments and companies was negatively affecting the independent music community.

The IMPALA COVID-19 Task Force’s next three recommendations apply to the European Union: enhanced loan guarantees for “cultural sectors,” additional crisis-prevention measures, and an amplified awareness of and response to governments’ actions.

The European Union has taken some steps to curb the coronavirus’ spread and minimize its impact, but has left specific prevention policies — including large-gathering bans and lockdowns — to member states. Italy has instituted a full lockdown, for instance, while Sweden hasn’t closed its businesses or its schools.

Speaking of the 10-point plan, IMPALA Executive Chair Helen Smith said: “This is a call for urgent action…No one should get left behind.”

Also, Francesca Trainini, who is the Chair of the Task Force, said, “The EU should monitor what is happening at a national level. We also need to map the results. Italy is just one example where the music sector is crumbling.”

Italy, Spain, Germany, and France have reported over 180,000 coronavirus infections, or nearly 40 percent of worldwide cases to date. Moreover, COVID-19 has hit Italy and Spain particularly hard; the countries’ approximately 11,000 coronavirus deaths account for more than half of the global death toll.

These unfortunate points, along with a correspondingly significant economic impact, prompted IMPALA to call for a unified, calculated response.