DaBaby Wears a Surgical Mask on His New Album Cover 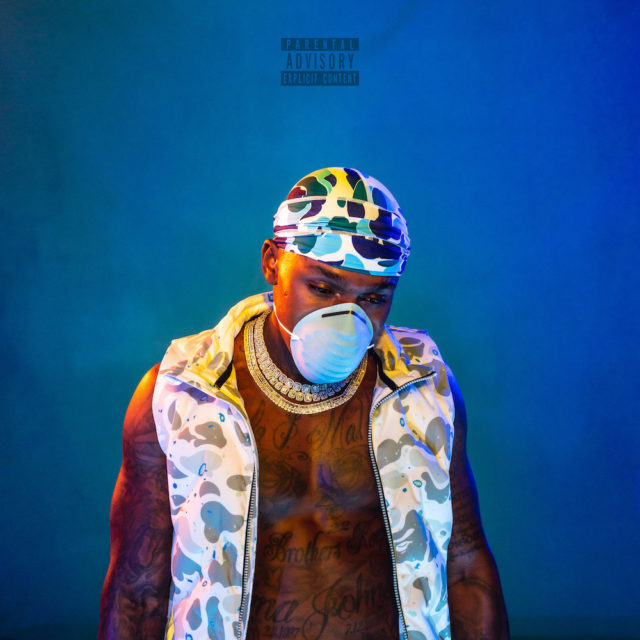 DaBaby, clad in a surgical mask, on the cover of his third studio album, Blame It on Baby.

Besides being one of the first (if not the first) artists to dawn a surgical mask for an album cover, DaBaby is making waves because of his quick-moving release schedule. Just three days ago, the 28-year-old took to social media and informed fans of Blame It on Baby’s imminent release.

The surprise record’s cover art made an impression almost immediately. Predictably, though, the 13-track, half-hour-long effort is receiving additional attention now that it’s available to buy and enjoy on streaming services.

Quavo, Future, Roddy Ricch, and others performed on Blame It on Baby, which, notably, marks DaBaby’s third studio album release in a little over a year. His debut record, Baby on Baby, hit store shelves and streaming platforms on March 1st, 2019, and it was followed by Kirk in September 2019.

While many social media fans are voicing their approval of Blame It on Baby — and its releasing amid the coronavirus crisis, at a time when they can especially use new entertainment — others are finding fault with its perceived similarities to DaBaby’s previous albums.

In this vein, one Twitter user stated: “I’m not even trynna be a hater but dababy release da same song every month at this point.” A second individual asked: “Did we really need another DaBaby album?”

And finally, a different individual yet tweeted: “DaBaby new album sound DaSame as his other ones.”

At the time of this writing, DaBaby hadn’t addressed his album’s release (or fans’ responses), with his most recent Twitter post being that which informed fans of the record’s upcoming launch.

DaBaby isn’t the only high-profile artist who’s dropped an album as of late. The Strokes released The New Abnormal one week ago, whereas TOPS arrived onto the new-release scene on April 3rd, with I Feel Alive . Undoubtedly, these and other works will help to keep fans entertained as they continue to power through the COVID-19 crisis.