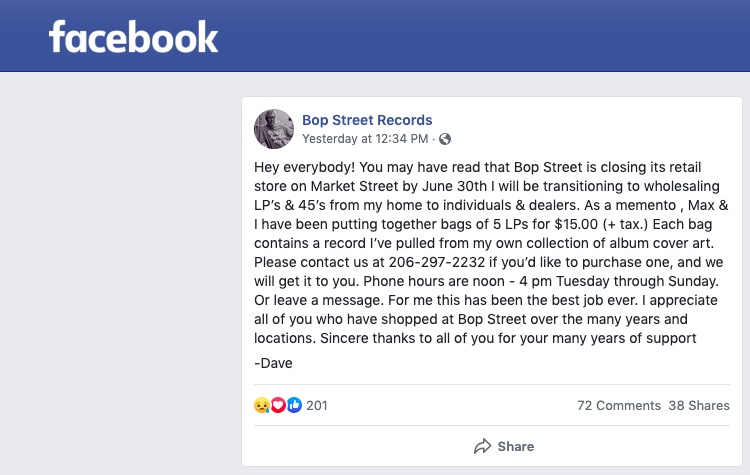 Bleak news from Seattle’s Bop Street Records, which is now closing its doors because of COVID-19 shutdowns.

Unfortunately, the brutal truth on the U.S. Government’s ‘small business’ rescue program means that most actual small businesses are now going out of business. Instead of helping mom-and-pop businesses who are struggling to retain employees and pay rent, major companies with hundreds or thousands of employees soaked up billions in Paycheck Protection Program funds.

At first, Shake Shack was the most glaring example: the chain used lobbyist loopholes to secure a juicy, $10 million loan.  But shockingly, the Los Angeles Lakers — a franchise worth billions and more importantly, an organization with access to billions in capital — took $4.6 million in funds.  And both easily did that because they enjoy cozy banking relationships and first-in-line access to capital.

Both Shake Shack and the Lakers returned the funds after howls of public outcry and resulting PR nightmares.  But scores of publicly-traded or well-endowed companies aren’t handing anything back, simply because they don’t have the media or general public giving them heat.  That includes Barron Trump’s elite prep school, St. Andrews, which has decided to keep millions in federal funds despite sitting on a $9 million endowment and lots of connections to capital.

Your local vinyl record shops, unfortunately, don’t have those connections or cashflow to secure a rescue loan. Mega-banks like Bank of America took care of their biggest customers while administering the largest PPP loans, all the while ignoring smaller, less profitable accounts.   Which means that a large percentage of vinyl records stores will not be around when government-imposed COVID-19 lockdowns are finally lifted.

That might explain why Amoeba Music, arguably the most famous record store in America, launched a GoFundMe campaign to survive (they later announced plans to abandon their Sunset Blvd. location).  It also might explain why Seattle’s Bop Street Records, another storied name to record collectors and musicians, decided to call it quits this week.

All of which is very, very sad for a vinyl record industry that was just getting its stride back.

Heading into this crisis, record stores were a hardscrabble group that was enjoying one of its greatest years in modern history.  After a decade-and-a-half of continued vinyl resurgence, people were finally realizing that analog LPs offered a distinct category for the future.  But with Record Store Day canceled and crowds sitting inside, most shops on now on the brink.

We haven’t done a canvas of which record stores received PPP funds.  But if record stores resemble the broader small business sector in America, it’s likely that most did not.  Some smaller businesses won the PPP lottery, most didn’t.  Which means that more stories like Bop Street will be coming soon.

But what if mega-labels like UMG could do something about that?

Sure, everyone in the music industry is feeling pain right now. But some are feeling it more than others, and major labels still have streaming and publishing revenue to fall back on. Those areas may not be surging, but unlike the scene of destruction in live entertainment, they’re still generating revenue and still actually breathing.

All of which raises the question of whether the majors might want to take a look at the desperate distribution endpoint known as record shops. Already, we’ve seen major labels rushing into vinyl record production, enough that vinyl purists are constantly complaining about the majors’ chokehold on distribution (which is another story entirely).

But instead of muscling for positioning and sweetheart deals with record stores, why not buy the record store itself at a rock-bottom price?  It’s not philanthropy, it’s business.

After all, vinyl records could conceivably rebound at some point in the future. Optimistically, vinyl record sales could even surpass the pre-COVID peaks they were enjoying. But without brick-and-mortar, that comeback could become muted, even with Amazon soaking up the excess demand (or maybe, because of that). Which means that labels might want to look at saving their local record store and the pipeline that comes with it — especially since America won’t be stepping in.