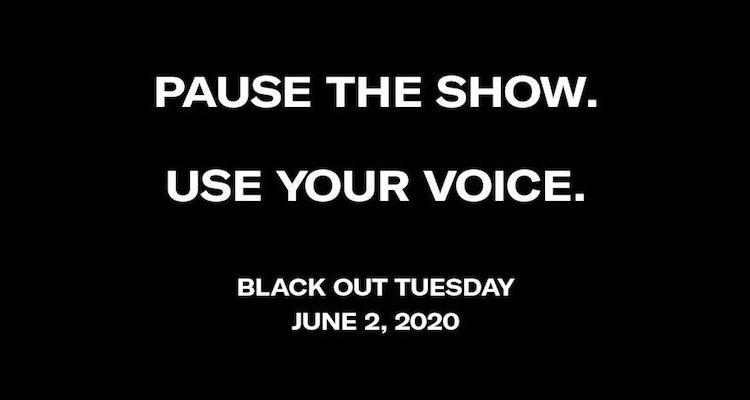 What started with a a sprinkling of major label divisions has now stretched to cover a broad swath of music and entertainment companies.  Now, ‘Black Out Tuesday’ is being observed by a substantial number of entertainment industry professionals — and could become an annual event.

‘Black Out Tuesday’ was conceived as a pause and show of solidarity for African-American grievances and support for protests throughout the country. Now, the time out and day of reflection has been embraced by a large number of music and entertainment companies.

The concept, which first gained steam on social media last week, carried the #TheShowMustBePaused hashtag while calling for the daylong ‘Black Out’. The industry-viral post outlined Tuesday as a day “to disconnect from work and reconnect with our community” to impart an “an urgent step of action to provoke accountability and change.”

Columbia Records clarified that “Black Out Tuesday” should not be treated as a simple day off, but a time for studied reflection.  “This is not a day off,” the Sony Entertainment label stated.  “Instead, this is a day to reflect and figure out ways to move forward in solidarity.”

Ultimately, the movement encompassed support from all three major labels and their various recording and publishing divisions.

“On June 2nd, BMI will observe ‘Black Out Tuesday,’ as we stand together with the Black community, our colleagues, employees, songwriters, composers, and the entire music industry in condemning hate, racism, and intolerance,” BMI emailed DMN. “Now is the time to unite our voices and speak out against injustice. BMI is committed to driving respect and equality for all, and we will actively seek out and support efforts to create the meaningful change that is so desperately needed.”

“UTA will join the Blackout Tuesday movement – suspending our business operations in solidarity with the black community and those fighting against social injustice in our country,” the company announced. “During this time, we will also be silent across our social channels and take time to listen, reflect, and educate ourselves. We will use our position in the industry to support the voices affected by oppression, racism, and hate. We ask that you all do the same.”